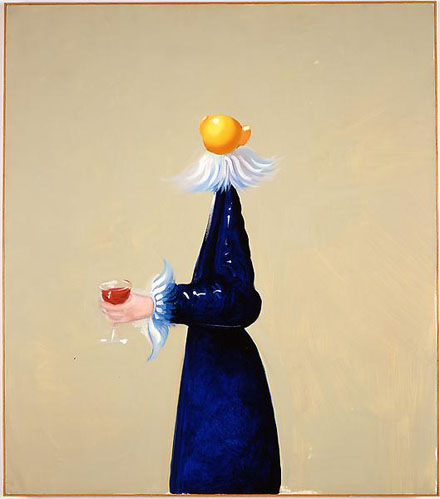 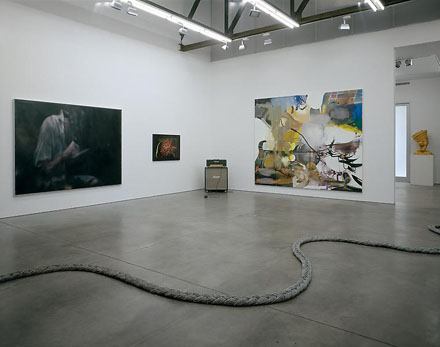 With its roster of international artists and art works of diverse mediums, Twenty Five is an eclectic mix of notable works from the past few decades. The show’s earliest piece is Michelangelo Pistoletto’s Metrocubo d’infinito of 1966.  When viewed from the correct angle, the mirrors reflect the viewer’s body countless times, seemingly into infinity. 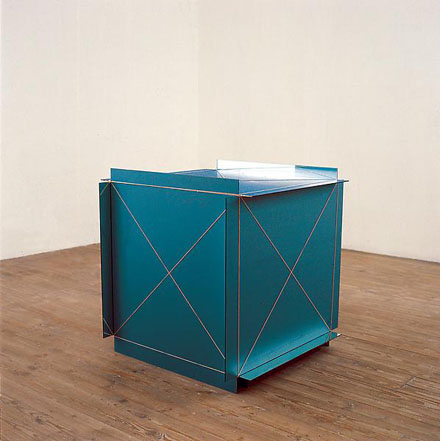 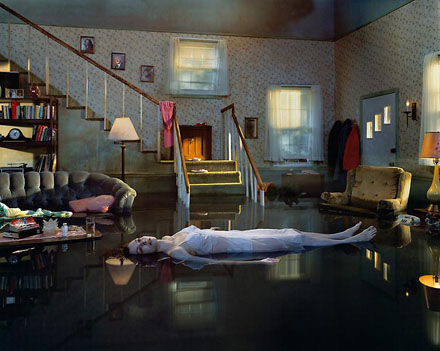 Since their initial display, some of these works have obtained iconic status within the artistic oeuvre of their creators.  Gregory Crewdson’s digital print, Untitled (Ophelia), is one such example. In 2003 it became the cover of Crewdson’s Twilight book, which contains a series of elaborately staged photographs that merge reality with the fantastical. 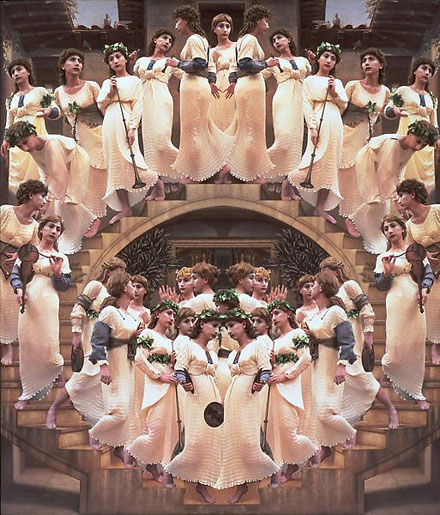 Another large scale photograph, Angels Descending Staricase by Yasumasa Morimura, showcases the artist as an original innovator of digital manipulation. Morimura is known for appropriating well known historical art works and inserting his own face and body into them. Angels Descending Staricase exemplifies his work, for it features many angel costumed Morimura figures in an allusion to The Golden Stairs by the Pre-Raphaelite painter, Sir Edward Burne-Jones (1833-1898). 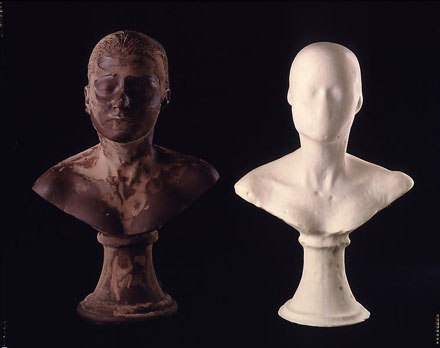 Bermuda born artist, Janine Antoni, is represented with her two chocolate and soap sculptures from Lick and Lather. The self-portrait busts were created and shaped by the artist’s teeth, tongue, and mouth as she literally licked and lathered them into being.

Given the varied mix of art works represented in Twenty Five, the dialogues between these works are of particular note. Albert Oehlen’s Lämmle and Martin Kippenberger, Ohne Titel (Meine Lügen sind ehrlich) are situated at opposite corners of the main gallery space.  Both artists were founders of the Lord Jim Lodge art group. As such, a comparison between these two works illuminates both a real life relationship between the artists, who worked concurrently until Kippenberger’s death in 1997, as well as Kippenberger’s lasting influence on his German contemporaries.

And kiltmakers could be fined up to pounds 1000 if they don’t comply.

There was a furious reaction from kilt wearers last night. Movie legend Sir Sean Connery said: “If this is the case, I have been wearing a woman’s skirt for more than 45 years now.

“I own several and I find them very comfortable.

“Joking apart, I am very proud to wear a kilt. It is certainly not womenswear. It is an important part of Scots tradition and also smart evening wear.” The EU forms insult hundreds of thousands of Scots worldwide who wear their kilts with pride as well as Hollywood heroes such as Vin Diesel, Samuel L Jackson and Braveheart star Mel Gibson. in our site last night movie

51st State star Jackson said: “When I finally got the kilt and stood in front of the mirror looking at myself, it looked very cool.

“All of a sudden I had this whole sort of gladiator thing going on.” The controversy is down to EU government agency Eurostat, overseen by Solbes, member for economics and monetary affairs.

His department collates information from 15 member states to drawup business trends for the EU.

Scots kiltmaking king Patrick McGroarty is standing firm and refusing to complete the offending document unless it is amended to include Scotland’s national dress.

Patrick, 53, is the director of Caledonian Highland Dress Manufacturers, who made kilts for hit BBC series Monarch Of The Glen.

The Perthshire firm also supply kilts to expat customers in far-flung places like Vietnam and Nigeria.

Patrick received the questionnaire after his company were chosen at random for a survey.

He started filling out the fivepage form about the company’s takings and products but stopped when he realised therewas no suitable section for kilts. The UK version of the form was sent out on Eurostat’s behalf by the Office of National Statistics.

Patrick said: “I phoned up and told them that they had made a very offensive mistake.

“They told me just to fill in the number of kilts I had sold in the space they had provided for women’s skirts.

“But we don’t make skirts and if they wanted figures from a women’s apparel company, they should have gone to one. This makes no sense at all. The kilt isan internationally renowned tradition, so I don’t know how this was allowed to happen.

“It would be interesting to find out what proud kilt-wearing Scots would think of these people saying that they wear ladies’ skirts.” Patrick, who runs two workshops and has 11 staff at his Abernethy site, was told there was no suitable category for his tartan creations and if he didn’t return the form, he would face the consequences. go to site last night movie

He said: “I had decided to just cast the form aside, but my book-keeper picked it up andnoticed a line which said I would be fined up to pounds 1000 if it wasn’t returned.

“If they change the wording of the form I will gladly send it back, but not until then.

“This is ludicrous. The form I was sent was cheeky and insulting.

“To call one of Scotland’s most famous traditions a skirt is just degrading and they should rectify this mistake immediately.

“It is absurd that officials from Europe are asking me insulting questions on something they obviously know nothing about.

They are ignorant to our traditions and background.” Scotland’s Minister for Culture and Tourism, Frank McAveety, wore the kilt on an official visit to Hollywood this month.

He said: “If Vin Diesel can wear a kilt and not feel any less of a man, that is good enough for me and should be for the rest of Europe.” An insider from Monarch Of The Glen insisted there was no gender confusion among fans of screen hunk Hamish Clark, whosecharacter Duncan wears Highland dress.

She said: “Given the response we have from female fans, it’s clear they understand better than Euro chiefs that kilts are not for ladies.” Howie Nicholsby, of Edinburgh’s Geoffrey (Tailor) Kiltmakers, who have kitted out some of Hollywood’s biggest names, said: “Vin and Samuel would both recognise these comments for what they are.

“They know the differences between a kilt and a skirt.” CAPTION(S):

This entry was posted on Saturday, June 5th, 2010 at 1:00 am and is filed under Go See. You can follow any responses to this entry through the RSS 2.0 feed. You can leave a response, or trackback from your own site.