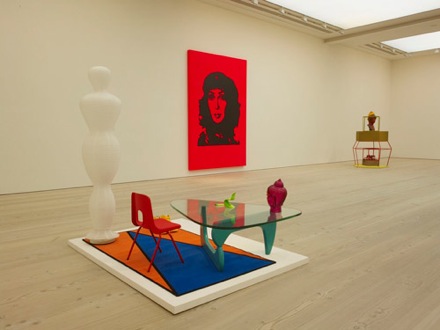 Currently on view at the Saatchi Gallery is ‘Newspeak: British Art Now,’ an exhibition featuring more than 30 young British artists whose work is represented in the collection of Charles Saatchi. The European premiere of the show was held at the State Hermitage Museum, St. Petersburg, Russia in October 2009.

for more story, images and links… 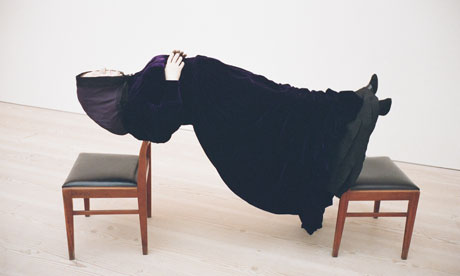 The show borrows its title from George Orwell’s novel “1984,” where “Newspeak” is an artificial language created to restrict the flow of thought in the dictatorial society of the future. The current Saatchi exhibition demonstrates the extraordinary idiomatic variety of contemporary artistic expression in Britain.

Over the past decade, Saatchi has tended to gravitate more towards young artists from the United States, the Near East, or Eastern Europe.  For the first time since 1992, when he began a series of exhibitions featuring young conceptual artists (most of whom held BFAs from Goldsmith College in London), Saatchi hosts an exhibition of indigenous talent on a grand scale.  His previous endeavor culminated in the historic “Sensation” exhibition of 1997 at the Royal Academy, which included works by Damien Hirst, Tracey Emin and Marcus Harvey.

As Lynette Boakye, a graduate of  Central St Martins School of Art and Design, describes her work in ‘Newspeak’ on the gallery’s website: “I’ve been working on a series of portraits. None of them is of existing people, but they are familiar. My roll call is growing and it contains some of my favorite characters. They include Grammy winners (gracious in acceptance of awards), revolutionaries, fanatics, anthropologists and missionaries (good for showing us how to live), savages (good for showing us how far we have come and how not to live), radicals and the generally angry, amongst others.”

William Daniels’ painting (above) is based on Thomas Phillip’s 1807 portrait of artist and poet William Blake.  According to the Saatchi Gallery, “Daniels’ William Blake II is uncanny in its decrepit, post-apocalyptic semblance. Exchanging the rich, warm hues of Georgian parlour painting for the ashen greys of his recycled study, Daniels revives his art historical subject as a zombie-like effigy, an homage to a hero that’s both futuristic and decayed. Through Daniel’s attenuate process of working from life models, William Blake II resounds with a heightened sense of the presence of the subject before the artist, bringing to light issues of originality, authenticity, and the malleability of documentation.”

This entry was posted on Monday, August 23rd, 2010 at 2:44 pm and is filed under Go See. You can follow any responses to this entry through the RSS 2.0 feed. You can leave a response, or trackback from your own site.