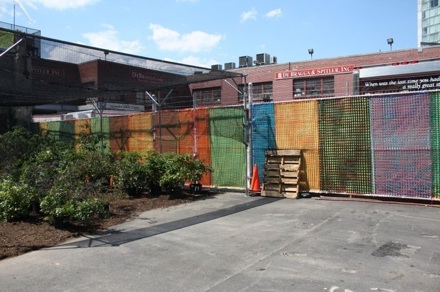 Currently on view at the corner of Gansevoort and Washington streets is Tauba Auerbach‘s Quarry; an installation at the South-end of the High Line, where the Whitney Museum expects to open their downtown branch in 2015.  The exhibit, which runs from July 18 though August 29, 2010, is the second installment of the three-part series ‘Whitney On-Site: New Commissions,’ a project anticipating the start of construction on the museum’s new building, currently scheduled for next Spring.

In Quarry, Auerbach (whose work was featured in the museum’s Biennial this year) plays on both the present form and future purpose of the site in question. Using red, yellow, and blue safety netting, she created a multicolored interlace along the chain-link fence, on the Gansevoort Street-side of the construction zone.  On the Washington Street side, she double-layered the chain-link, and added a bright blue tarp as a backdrop. Using photographic decals, she also transformed the trailers housed behind the fence into giant slabs of marble, cleverly referencing the nature of the materials to be mined within. 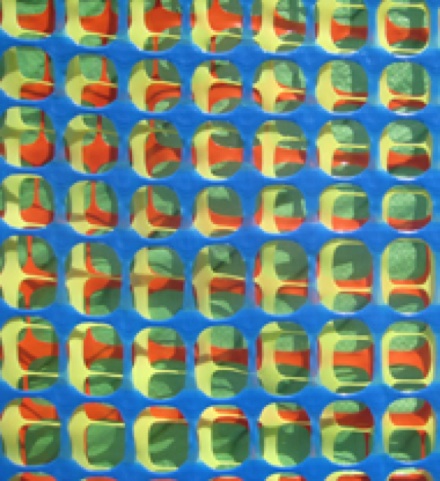 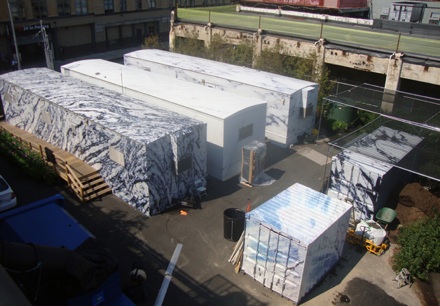 The variety of perspectives from which to experience the installation is characteristic of Auerbach’s current work, which often explores the optical experience of the viewer as it is driven by their movement around an object. Quarry symbolically acknowledges the conceptual possibilities of the site, through the use of materials which simultaneously address and obscure its present function.  The work summarizes, from start to finish, the process in which it also participates.

The ‘Whitney On-Site’ series debuted in May, with an installation by Wade Guyton and Kelley Walker. Their project entailed wrapping the exterior fence in brightly-colored vinyl, printed with fruit and geometric patterns. Barbara Kruger will contribute the third and final installment later this year.

This entry was posted on Thursday, August 12th, 2010 at 6:01 pm and is filed under Art News, Go See. You can follow any responses to this entry through the RSS 2.0 feed. You can leave a response, or trackback from your own site.