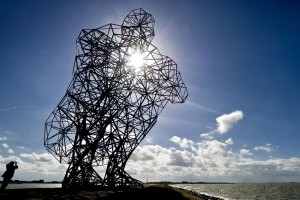 Exposure (2010) by Antony Gormley, via Artdaily

One of Antony Gormley‘s most intricate sculptures to date, a massive, squatting human figure, now stands 25 meters high near the Dutch city of Lelystad. The work, entitled Exposure, is five meters higher than Gormley’s most famous sculpture, Angel of the North, and weighs approximately 60 tons. The figure is composed of 5,000 hand-cut metal rods, each of a different length, and fastened with 14,000 bolts. The artist spent more than five years planning and creating the gargantuan structure, which would stand 100 meters tall if fully-erect. 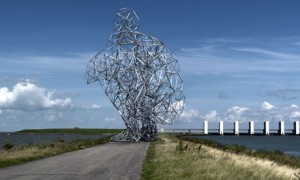 Exposure (2010) by Antony Gormley, via TheGuardian

Like most of Gormley’s works, the figure began as a cast model of himself, and was expanded to its site-specific proportions. Visitors standing next to the sculpture reach only as high as the figure’s feet. One of the principle features of the piece is its transparency, which lends it a quality insubstantiality despite its enormous size. “I think of him as a constellation. You can think of these nodes as starbursts within the body. He is not struggling, he is simply contemplating the horizon, contemplating space at large, but he is himself space at large. It is not easily understood — you have to walk around it, walk underneath and even climb it,” Gormley said in a recent interview with The LondonTimes. 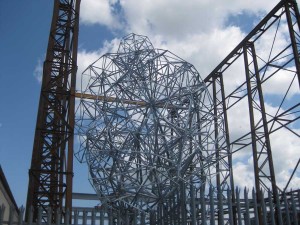 Exposure (2010) by Antony Gormley, via E-Architect

Gormley’s design for Exposure was the winner of an international competition in 2005, organized in the Dutch province of Flevoland. The sculpture is now one of six grand-scale works commissioned for the area, which also include Marinus Boezem’s Green Cathedral and Robert Morris’ Observatorium. 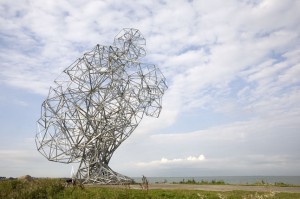 Exposure (2010) by Antony Gormley, via The Telegraph

Exposure differs in scale and scope from previous works by the artist such as Event Horizon, which took place this past March in New York. In this installation, Gormley placed life-size bronze figures cast from the artist’s body throughout Madison Square Park. In One and Other (2009), Gormley had living Londoners occupy the Fourth Plinth of Trafalgar Square. Exposure departs from Gormley’s earlier portrayals of the body and creates a figure of open space–an “open space of possibility…body dealt with from inside out,” the artist said. A great technical challenge demanding years of labor and planning, the resulting Exposure is a sublime feat to behold.

This entry was posted on Saturday, September 25th, 2010 at 2:26 pm and is filed under Art News, Go See. You can follow any responses to this entry through the RSS 2.0 feed. You can leave a response, or trackback from your own site.