Art Observed was on site for Barry McGee’s (aka “TWIST”) new work on the “Deitch Wall” on East Houston and Bowery. With longtime collaborator Josh Lazcano (aka “AMAZE”), Mcgee spray painted simple red tags of the names and crews of graffiti writers from both past and present generations. Watch the video above for AO’s short clip. 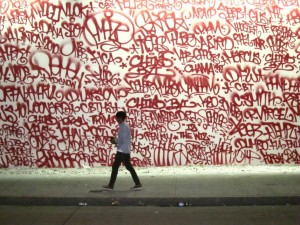 All Photos By Jeff Newman/TheArtCollectors

In its past, the wall has exhibited work by Os Gemeos, Keith Haring, and, most recently, Shepard Fairey.

More images, text, and story after the jump. 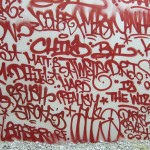 The mural was organized by real-estate developer Tony Goldman, a long-time friend of Jeffrey Deitch. Although Mr. Goldman said in a recent Wall Street Journal article that Mr. Deitch “played no role in arranging [this] project with Mr. McGee,” Barry McGee was represented by Deitch’s former gallery, Deitch Projects, before it folded in June. 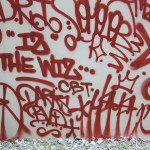 Regardless of Deitch’s participation in the project, since Deitch has closed, McGee is a free agent in the city and the Bowery mural will undoubtedly serve as a major advertisement for his work.

This entry was posted on Friday, September 3rd, 2010 at 6:12 pm and is filed under AO On Site. You can follow any responses to this entry through the RSS 2.0 feed. You can leave a response, or trackback from your own site.