AO On Site – New York (with video): Rob Pruitt 'Pattern and Degradation' at Gavin Brown's Enterprise and Maccarone through October 23, 2010 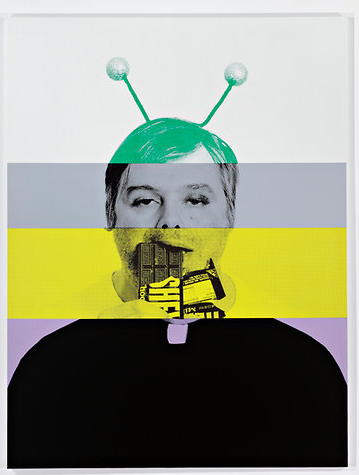 Rob Pruitt, the artist behind “Artworks for Teenage Boys” and “Artworks for Teenage Girls,” both paeans to and explorations of perceptions of adolescence, springboards off a particular microcosm of teenagerhood, the Amish rumspringa, in his current exhibition, “Pattern and Degradation.” This show, which opened September 11th at Gavin Brown’s Enterprise and Maccarone, represents an ongoing rumspringa for the artist himself. In the Amish tradition, teens are given the chance to take temporary leave of their traditional, restrictive culture in order to indulge in the excesses of mainstream American youth, and then are allowed to decide if they wish to return to the community or stay in the outside world. 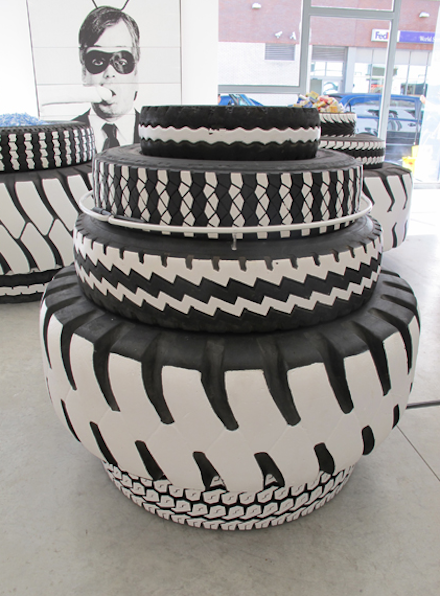 For Pruitt, “Pattern and Degradation” is the manifestation of the artist’s life lived as an unbroken exploration of this tradition. Painted piles of tires are filled with indulgent, American-snack icons, such as oreos, pretzels, and foil-wrapped chocolate coins. On the walls are paintings of recognizable, faux-ironic t-shirts, including copulating pandas only a fifteen-year old could pull off, and the tongue-in-cheek “Double-DOUBLE-Rainbow,” playing on the viral YouTube video. 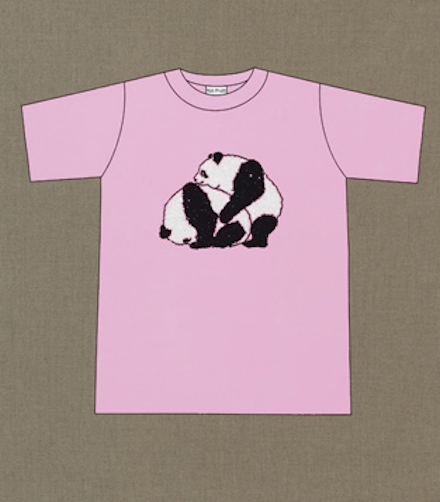 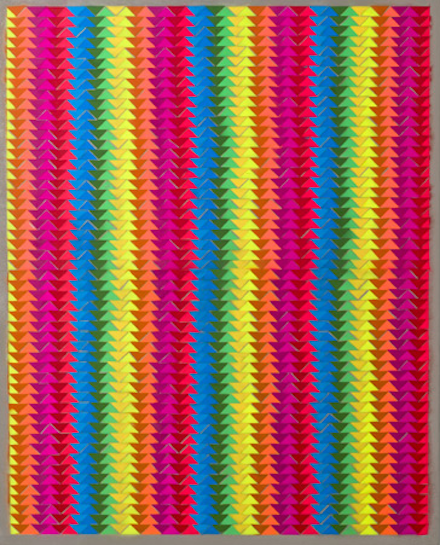 The show is infused throughout with youthful wit, represented also by Pruitt’s repainted IKEA wall-art and rows of chrome-taped chairs, but the humor is clearly projected through an adult lens. The results of the artist’s alleged perpetual teenagerdom do not fall prey to the messiness of bona-fide adolesence; for all the glitter, Pruitt’s artworks here reveal a hard, clean, straight, and highly-organized mind. The extremes, indulgences, and silliness of young American pop-culture are thoroughly explored – at an arm’s length. 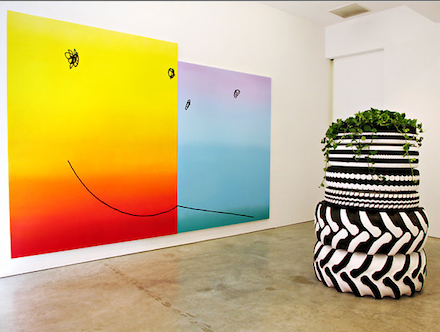 Rob Pruitt, Pattern and Degradation, Installation view with The Kiss After Brancusi, 2010. 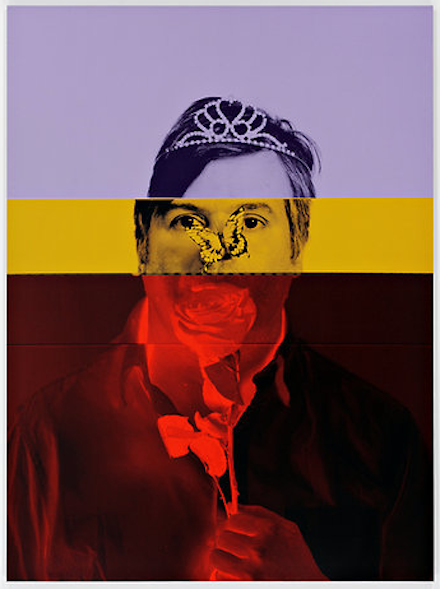 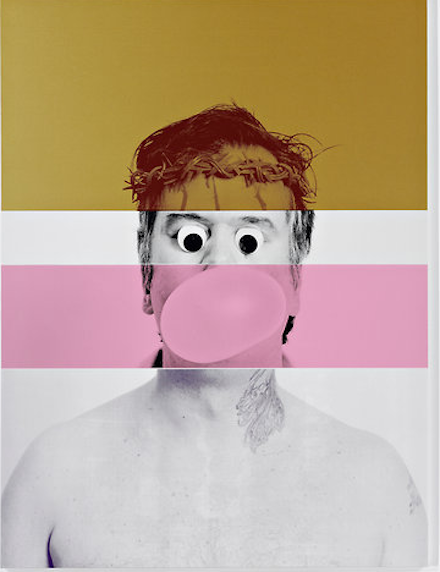 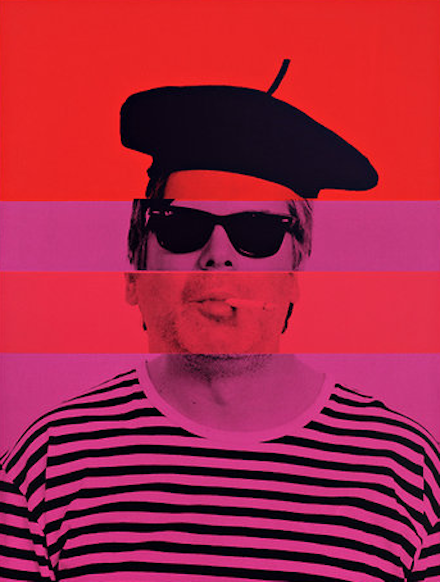 That adult distance, while carefully preserved, does not amount to an adult’s ennui. While the chaos of adolescence experienced through grown-up dis-affectation could easily lead to a dreary, dire product, the work in “Pattern and Degradation” is consistently thoughtful, lively, and even pretty. The potentially rote quality of silly t-shirt after silly t-shirt is supplanted by a bright sort of attractiveness; the result of Pruitt’s believable contentment with what those t-shirts have to offer. This acceptance is perhaps most evident in his series of composite self-portraits. While the artist may be exploring his own myriad identities, the subject of the work remains clearly defined. While self-exploration may be a lifelong process, the murkiness and uncertainty of that liminal phase between innocence and maturity is left behind. 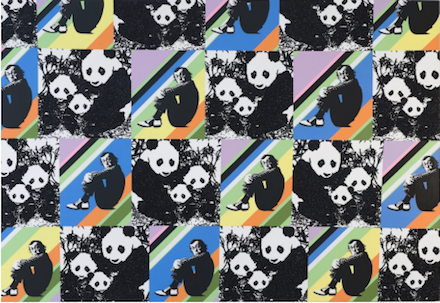 “Pattern and Degradation” ultimately exhibits a very adult visit to youthful excess. Rumspringa, inherently an impermanent concept, is excepted from its own rule in this case, and here represents a lifelong sojourn. Images of Woody Allen, which appear both on the t-shirt paintings and in a large Warholian pastiche, emphasize the realities of Pruitt’s central thesis. The repetition of Allen’s image, knees hugged to his chest, is an affirmation that you can shift gears like a kid, insert yourself into a culture you’ve been given, and stand next to it, gimlet-eyed, all at the same time.

The Boston Globe (Boston, MA) February 2, 1993 | Scott Allen It was probably inevitable. Marijuana, that symbol of the counterculture that helped spawn the modern environmental movement, is now being promoted as a way to reduce pollution and save trees by groups that favor its legalization.

It seems one strain of marijuana, cannabis rudelis, is used as a substitute for wood fiber in the making of paper, cellophane and rope in some countries, including Spain and China. Unlike industrial forests, marijuana needs no pesticides, say its advocates, and, unlike trees, it doesn’t release poisonous dioxin when pulverized.

“It is an immensely environmentally friendly product, but it runs into the moral quagmire of American intolerance,” said Allen St. Pierre, assistant director of the National Organization for the Reform of Marijuana Laws, NORML. The group has made legalization of cannabis rudelis one of its top three priorities this year.

St. Pierre said cannabis rudelis does not have the psychotropic effects of other strains of marijuana (“You’d have just as much fun smoking a pine cone,” he said.), and most other countries allow its cultivation. Even the United States temporarily legalized hemp cultivation to alleviate a rope and thread shortage during World War II, but that ended in 1946. Current US law makes no distinction between types of pot. Lights to go out at 2 more reactors These are dark days for the US nuclear industry, as old plants continue to shut down prematurely, and no new ones have been ordered since 1974. In the last two months, the owners of two reactors — Oregon’s Trojan and California’s San Onofre I — have decided to close them permanently for economic reasons, and some are predicting that 20-30 plants will follow suit. web site legalization of cannabis

Meanwhile, the industry’s effort to get more life out of existing reactors is fizzling. Yankee Rowe in Massachusetts was to have been the test case for a program to extend reactor licenses 20 years beyond the usual 40 years, but the plant closed permanently in 1991. Now, officials at the other would-be test case, Monticello in Minnesota, say they are dropping plans for a license extension for now. Ironically, O’Leary is a former vice president of the Northern States Power, which owns Monticello. Gasoline ruling has officials worried Air pollution officials up and down the eastern seaboard are talking about a federal court ruling in New York last month that, if not overturned, could force them to require gasoline that is 24 cents a gallon more expensive as part of their strategy to comply with federal antismog law.

Judge Thomas J. McAvoy ruled that, if New York goes ahead with plans to require automakers to build less-polluting “California standard” cars, it must also require a cleaner burning gasoline sold in California. Officials in New York, Massachusetts and 10 other Northeast states plan to require the less-polluting cars by the late-1990s, but say the California fuel is both costly and unnecessary.

New York Attorney General Robert Abrams has appealed, saying McAvoy made his ruling on technical grounds without giving the state a chance to present its side. McAvoy said the California standard cars were designed for the California fuel, and failing to require it would illegally force auto makers to redesign the vehicles just for New York. Abrams argues that the redesign is minor, and may not be necessary at all.

Despite McAvoy’s Jan. 22 ruling, Maine regulators issued final plans to require the California cars but not the fuel anyway. “We have no doubt that (McAvoy’s) decision will be overturned on appeal,” said Dean Marriott, Maine’s environmental protection commissioner.

This entry was posted on Wednesday, September 22nd, 2010 at 4:05 pm and is filed under Art News. You can follow any responses to this entry through the RSS 2.0 feed. You can leave a response, or trackback from your own site.