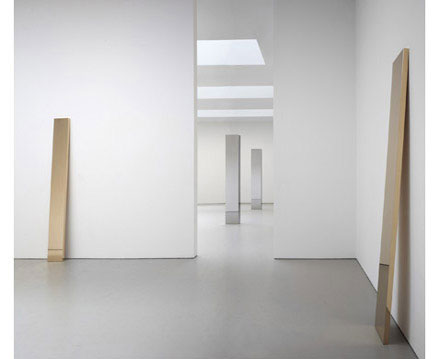 David Zwirner is currently presenting a new body of work by Californian artist John McCracken. McCracken first gained international recognition with his monochromatic geometries placed between flat surfaces and three-dimensional objects. In the present exhibition, he addresses the gallery space as a whole, allowing its architecture and light to participate fully in the installation. In the first room, three bronze planks lean against the wall, in an apparent departure from the materiality of his previous works in fiberglass and resin, while continuing to work in his signature format – the narrow, rectangular, monochromatic panel. Their shiny, reflective surfaces introduce the exhibition’s key motifs, inserting them into a dialogue, both formally and conceptually, with the four free-standing stainless-steel sculptures in the adjacent room: Star, Infinite, Dimension and Electron. 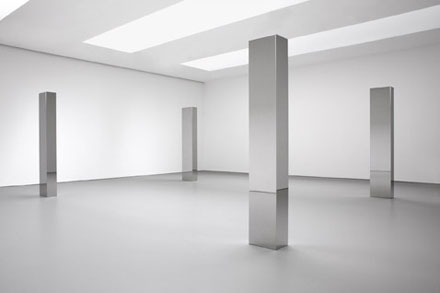 Despite their individualized, almost solitary condition, the works are deeply interconnected through interplays of lights and shadows. Their appealing form and presence invites the viewer to approach them closely, and to participate in a game of mirroring and reflection, in which colors and shapes resonate from one room to the other. Addressing ideas of minimalism and monumentality, scale and position, these sculptures open up the space they inhabit, revealing the details of their surrounding environment as much as absorbing the movements around them. According to McCracken, “The sculptures become in a sense kinetic, changing more radically than one might expect.” He introduces the element of movement to address the position and role of sculpture beyond questions of dimensionality and color. 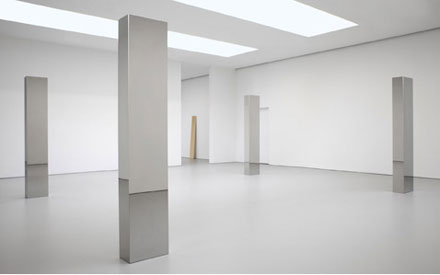 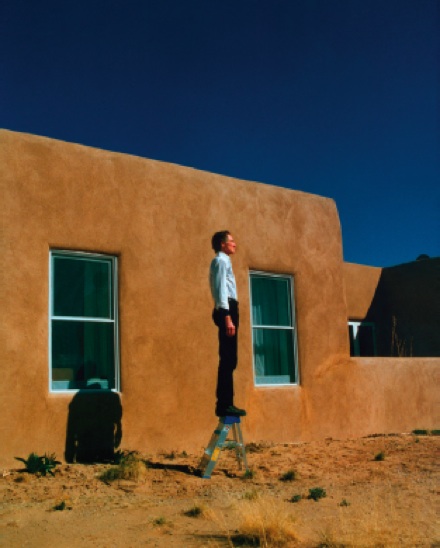 John McCracken was born in 1934 in Berkely, California, and currently lives and works in Santa Fe, New Mexico. Since the 1960s, he has exhibited widely in the United States and abroad, including historical exhibitions such as Primary Structures at the Jewish Museum in 1966 and American Sculpture of the Sixties at the Los Angeles County Museum, 1967. Recently he has participated in major group shows at Moderna Museet, Stockholm in 2008, and Documenta 12 in Kassel, Germany. Beginning in November of this year, a major museum retrospective of the artist’s work will be featured at Castello di Rivoli, Turin. The artist is represented in New York by David Zwiner.

This entry was posted on Sunday, October 3rd, 2010 at 3:07 pm and is filed under Art News, Go See. You can follow any responses to this entry through the RSS 2.0 feed. You can leave a response, or trackback from your own site.