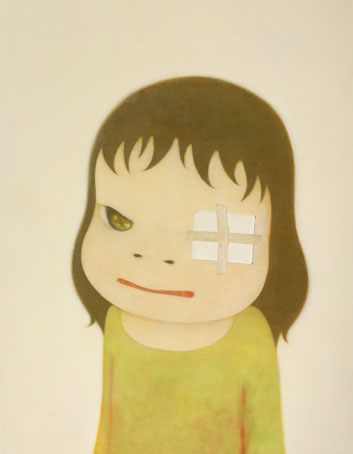 The current retrospective of Japanese Neo-Pop artist Yoshitomo Nara at the Asia Society is his first in New York, showcasing over one hundred works in a variety of mediums–including paintings, sculptures, ceramics, installations, poems, and drawings–all with the artist’s signature kowa kawaii, or “creepy-cute” aesthetic. Before the visitor enters the exhibition, there is an outdoor installation of Nara’s sculpture White Ghost, on view at Park Avenue and 67th and 70th streets. The sculptures are identical, and face each other across three blocks, acting as komainu, or protective guardians of entrances. The sculptures display a combination of slightly-sinister features with the aesthetic of friendly cartoons, a strategy repeated throughout the many works in the exhibition. Watch the AO Onsite video of White Ghost below: 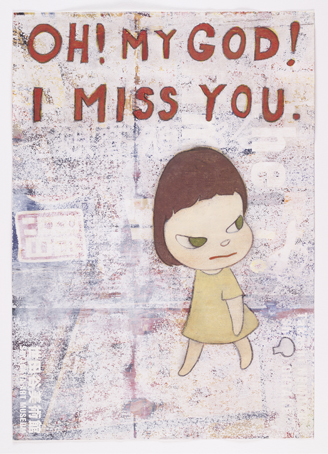 The exhibition dispels previous criticism of Nara’s work as being primarily influenced by manga and anime, focusing instead on the artist’s love of music. As Nara explains in the exhibition catalogue, “The influence of music on me is far more significant than that of manga and other things, that people often talk about.” Throughout the show, which is split up into three themes of isolation, music, and rebellion, reference is made to the music of The Ramones, The Clash, Green Day, and other punk and rock groups that inspired the artist with their counter-cultural rebellion and contagious energy. 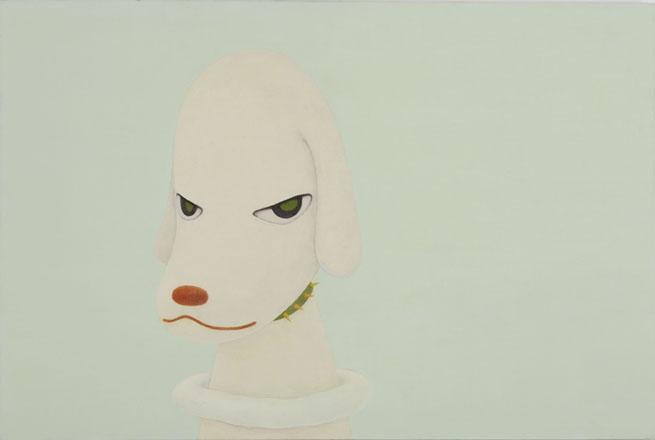 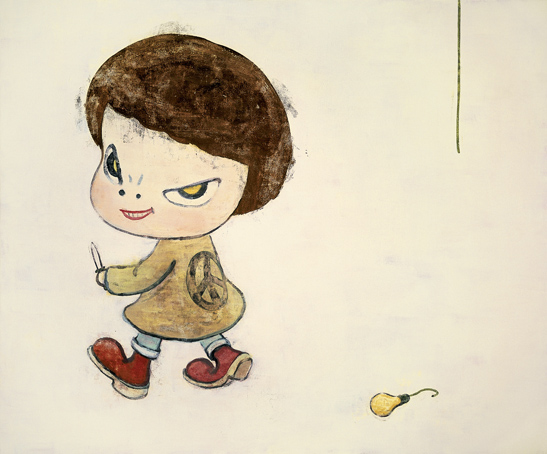 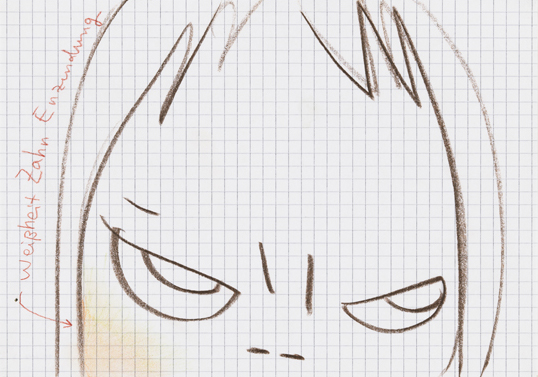 Nara’s musical influences are visualized through a number of different strategies. Often, the titles of works refer to punk or rock lyrics, such as White Riot, Little Ramona, and It’s Better to Burn  Out Than Fade Away. More often, Nara includes lyrics into his drawings, in stylized script or typeface. In his new ceramic works, made in one of Japan’s oldest kilns in the Shigaraki region, Nara has painted song phrases and conversation snippets in black onto traditional forms, evoking the contradictory visual effects of both graffiti and Japanese ink paintings. In the same room, a wall displays record sleeves that the artist personally chose as inspirational, celebrating album art’s underrated capacity to blend music and visual art. Nara has also designed his own album covers for the Japanese punk band The Star Club in 1999, and Shonen Knife in 1998. Often in this exhibition, the artist’s own writings appear on scrap paper drawings, resembling song lyrics not yet put to music. 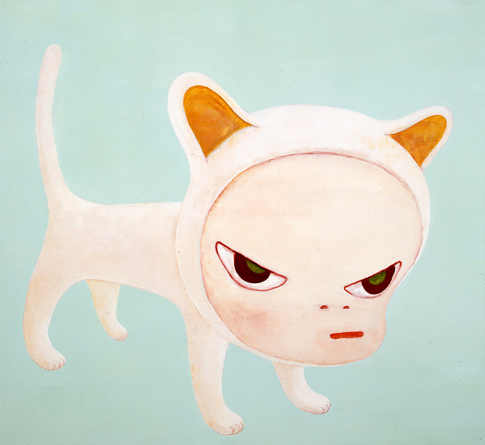 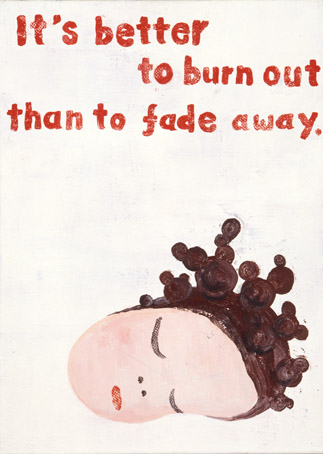 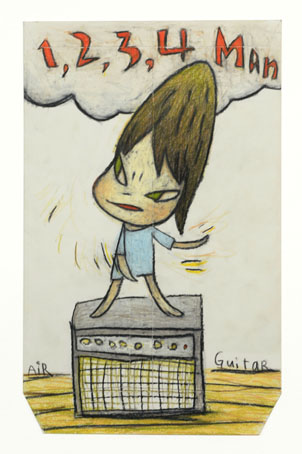 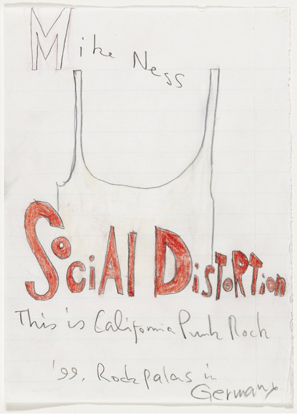 In addition to this synthesis of music and the visual arts, Nara collaborates with designer Hideki Toyoshima on the second floor of the exhibition. The team transformed the gallery space into a large-scale tree house, with wooden floors and false walls made of found materials punctured with holes, beyond which hang paintings by Nara. The halls in this area are lined with framed sketches. The final room houses the installation Drawing Room Between the Concord and Merrimack, which was produced specifically for this exhibition in a live performance at the Park Avenue Armory. Music plays in the background, and the centerpiece is a small shack filled with drawings by Nara tacked to the walls. The shack sits on round, brightly colored stages where children can climb freely and interact with the work. In this instance, music is the inspiration for the work, but also an important participant within the installation. It is intended to evoke the artist’s studio as well as a whimsical environment for creative play. 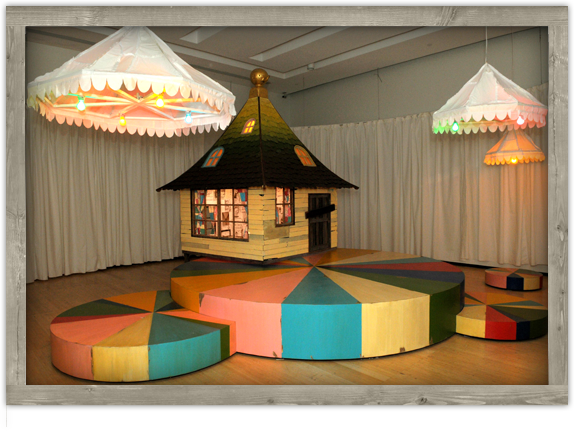 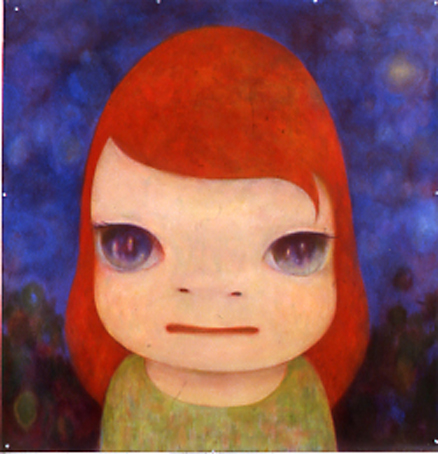 Childhood, both his own and others, is a meta-theme throughout Nara’s work. Critics often maintain that he has managed to capture the emotional essence of Japanese teens who feel a sense of helplessness, isolation, and rage within Japanese society. Many of the works combine disparate emotions into a seamless visual expression. Loneliness, anger, isolation, fear, and abandonment all feature in Nara’s portraits of children, dogs, and animal-child hybrids. Dogs and children are interchangeable characters in Nara’s works, both symbolizing for the artist obedience, loneliness, and solitude. For instance, the work Dogs from Your Childhood (1999) consists of three identical sculptures of dogs in a circle, who appear to be commiserating with one another. Nara began to strip away the inessential elements in his works until he achieved what has become his signature style in the 1991 work The Girl with The Knife in Her Hand. The layered brushwork gives the portraits a soft focus and slightly-hazy appearance; what appear from a distance to be solid colors are in fact an intricate multitude of hues. The backgrounds of Nara’s works are usually left blank or monochromatic, much like the children’s illustrations he admires. These works contain a variety of potential narratives that the viewer can unfold: children with menacing glances, dogs with child’s faces, children smoking cigarettes, and canvases that appear to be bandaged all participate in the exhibition. 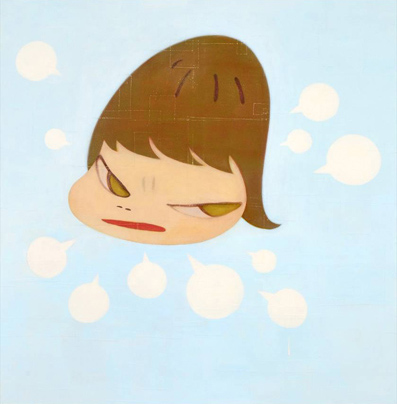 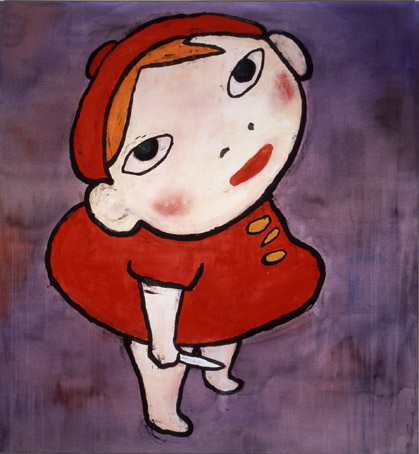 Yoshitomo Nara, The Girl with the Knife in Her Hand, 1991. 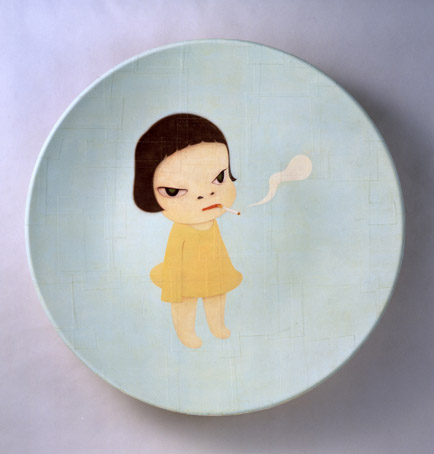 Yoshitomo Nara was born in 1959 in Hirorosaki, Japan. His work is considered part of the Japanese Neo-Pop movement, alongside his contemporary Takashi Murakami. Said to have defined the quintessential kowa kawaii or “creepy cute” aesthetic, Nara has established a strong cult following both in Japan and abroad. He received his MFA from Aichi Prefectural University of Fine Arts and Music, after which he spent 12 years in Germany studying with acclaimed German painter A.R. Penck. His work has been exhibited in museums throughout the world, notably the Museum of Contemporary Art, Chicago, the Hara Museum of Contemporary Art, Tokyo, and the Baltic Center for Contemporary Art in the United Kingdom. He is represented by Marianne Boesky Gallery in New York, and Blum & Poe in Los Angeles.

The Washington Post September 19, 2009 REGULATORS Treasury Secretary Timothy F. Geithner said an emergency program that had guaranteed as much as $3 trillion in assets in money- market mutual funds was being allowed to expire Friday.

“As the risk of catastrophic failure of the financial system has receded, the need for some of the emergency programs put in place during the most acute phase of the crisis has receded as well,’ ” Geithner said in a statement. go to site google voice app

Geithner had said last week that the financial system was healthy enough to begin unwinding some of the programs put in place a year ago after the collapse of Lehman Brothers triggered the worst financial crisis in seven decades. The program to guarantee assets in money-market mutual funds had originally been established in September 2008 to last for three months but was then extended through Sept. 18 of this year.

– Associated Press TECHNOLOGY Google said Apple’s top marketing executive personally told the company that its Google Voice application had been rejected because it duplicates the telephone dialer on the iPhone and could be used as a replacement.

The newly disclosed discussion, revealed in a regulatory filing made fully public Friday, contrasts with Apple’s own denial that it rejected the program. Apple said Friday that the two Silicon Valley companies are still discussing the application.

The Federal Communications Commission is looking at Apple’s block on the Google Voice app as part of a bigger investigation into how wireless industry practices affect consumers.

In a section of a letter that had originally been redacted, Google said Phil Schiller of Apple told Google’s Alan Eustace, a senior vice president, during a July 7 phone call that Apple was rejecting the program.

– Associated Press BANKING The chairman of the Federal Deposit Insurance Corp. says she is “considering all options, including borrowing from Treasury,” to replenish the dwindling fund that insures bank deposits.

Bair’s remarks go beyond what she said just three weeks ago when asked about tapping the Treasury after the fund that insures regular bank deposit accounts up to $250,000 hit its lowest point since 1992, at the height of the savings-and-loan crisis. “Not at this point in time,” she said on Aug. 27.

The FDIC estimates bank failures will cost the fund around $70 billion through 2013. Ninety-two banks have failed so far this year. Hundreds more are expected to fail in coming years largely because of souring loans for commercial real estate.

– Associated Press LEGAL The Internal Revenue Service is moving to bolster enforcement of a 2004 law that bars companies from avoiding U.S. taxes by moving their headquarters offshore.

The tax agency said in a notice that it has “become aware” of transactions designed to subvert a test that determines whether a company’s move offshore was for legitimate business reasons or just to avoid U.S. taxes. “These transactions are inconsistent with the purposes” of the 2004 law, according to the IRS notice, which banned them starting Sept. 17.

The action is the IRS’s latest effort to stop practices that let U.S. companies avoid taxes by establishing nominal headquarters in low-tax countries such Bermuda and the Cayman Islands while keeping their operational headquarters in the United States.

This entry was posted on Saturday, October 2nd, 2010 at 1:45 pm and is filed under Go See. You can follow any responses to this entry through the RSS 2.0 feed. You can leave a response, or trackback from your own site.

One Response to “Go See – New York (With Video): Yoshitomo Nara "Nobody's Fool" at the Asia Society through January 2, 2011”