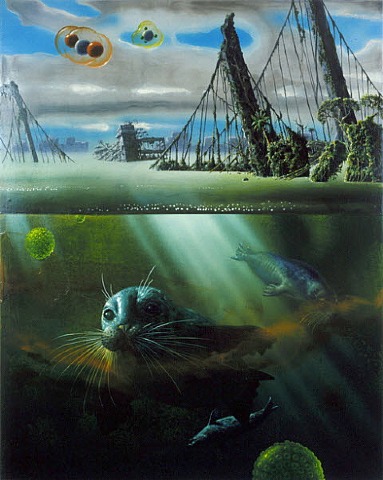 On view at Salomon Contemporary is Thunderdome, an exhibition of the work of Alexis Rockman running concurrently with the major retrospective of his work at the Smithsonian American Art Museum, A Fable for Tomorrow. While a direct comparison isn’t made outright by the Salomon, Thunderdome references George Miller’s 1985 Mad Max Beyond Thunderdome, a post apocalyptic action film starring Tina Turner and Mel Gibson. The Thunderdome in the film is “a sanctioned arena, where aggressive human behavior, a basic part of evolutionary history, can be played out without devastating consequences to the planet.” This is a useful reference with which to begin to explain Rockman’s work, which in fantastic detail imagines the world after centuries of human abuse, without the protection Miller’s Thunderdome would offer. The exhibition can also be seen as the gallery becoming Rockman’s Thunderdome, a space where the artist foretells of the dangers of human environmental cruelty, depicting the wreckage using scientific forecasting and hyperrealist painting technique. 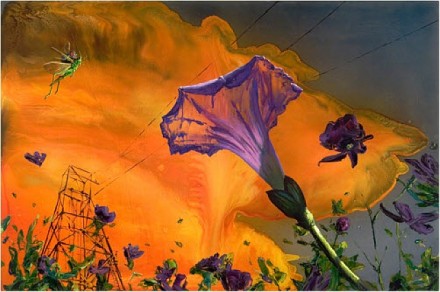 Rockman was one of the first artists to devote his craft to environmental issues. Since beginning to exhibit internationally in 1989, he has addressed issues “from evolutionary biology and genetic engineering to deforestation and climate change.” Rockman’s brilliance is the marriage of astute scientific accuracy in his work with fantasy. His mural-sized works express an apocalyptic vision that while reminiscent of epic Renaissance bible scenes, use an intensely artificial color palette evocative of screen savers, fantasy animation, or clip art. A Fable for Tomorrow is also a referential title, “taken from the opening chapter of Rachel Carson’s influential 1962 book Silent Spring.” Like Thunderdome the title is meant to shed light on Rockman’s practice. In Silent Spring, Carson combines “mythic narrative and factual reportage.” Rockman essentially manages the same seemingly contradictory combination, through the painting of “empirical” fact (quotations from Smithsonian Press Release). Rockman’s effect is the creation of a narrative of our destruction and the dramatic realization of our environmental future with art historical and cinematic references intact. While the Smithsonian has seminal Rockman works on view such as Manifest Destiny (2003-2004)—the mural-sized work depicting Brooklyn under water due to global warming—Thunderdrome has some poignant works to consider in terms of the artist in relation to global environmental disasters. 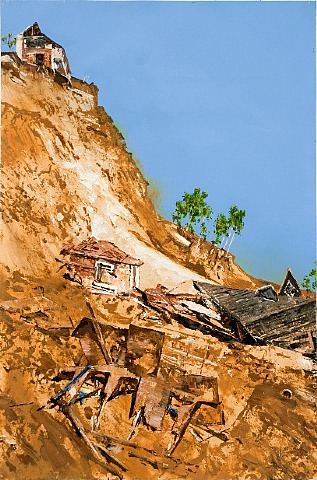 Jamaica (2007) depicts the effects land erosion can have on already fragile infrastructure; an ominous work that predates the Haitian earthquake and ensuing humanitarian crisis by three years.

This entry was posted on Tuesday, December 21st, 2010 at 5:44 am and is filed under Go See. You can follow any responses to this entry through the RSS 2.0 feed. You can leave a response, or trackback from your own site.