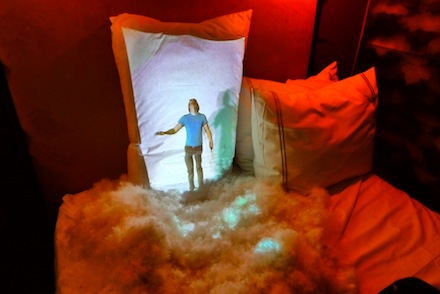 Zerek Kempf, Weight of Fall (Waltz) (2011) at 2-UP Gallery.
All images Nicolas Linnert for Art Observed.

Friday evening’s Dependent Art Fair opened its doors for a one-night-only event showcasing the works of various galleries and artist groups. The newest addition to 2011’s growing roster of fairs, the Dependent was held on the 12th and 14th floors of Chelsea’s Sheraton Hotel. Fifteen exhibitors filled their respective hotel rooms with works for sale. Some revealed highly curated installations while others presented a collected showcase of individual works. The fifteen groups were given  60 minutes to install, with the fair beginning its preview hour at 4pm and closing altogether at 9 that evening. What began as a scattered number of curious collectors and onlookers grew quickly to a sizable throng of attendees navigating from room to room through the hotel’s packed hallways.

Cleopatra’s gallery featured, among other works, an intensely color-saturated bedspread by Polly Apfelbaum and a perfume piece by Anicka Yi that filled the room and wafted into the hallway. The glowing aura of the bedspread in tandem with the acute aroma of Yi’s oil gave the installation a distinct sensorial personality. 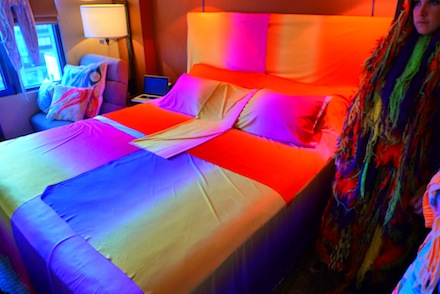 2-UP, a collaborative poster project, distributed its collection of double-sided monthly poster editions and offered installations for sale centered on luggage pieces as installation spaces. Zerek Kempf’s crowd-pleasing Weight of Fall (Waltz) projected a moving figure onto a pillowcase surrounded by cloud-like pillow stuffings. When prompted by a collector about pricing, the artist was caught unawares. 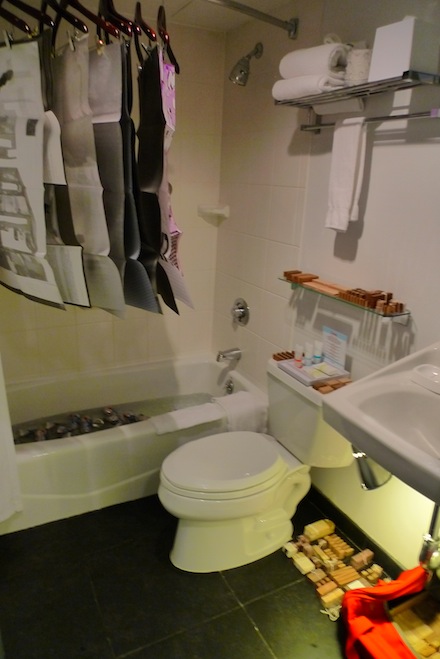 2-UP Posters hung from shower rod, 2-UP Gallery.

At Ramiken Crucible, artist Andra Ursata encased in glass a highly detailed diorama that sat on twig stilts. Elevated and lit from a single lamp below it, the scene was a miniature replica of her childhood home in Romania. The artist mulled her own memory to meticulously reconstruct her home and added a ghostlike presence to the center of the room. 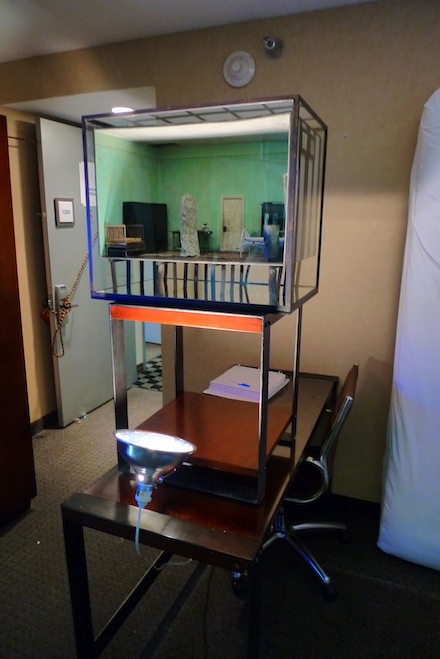 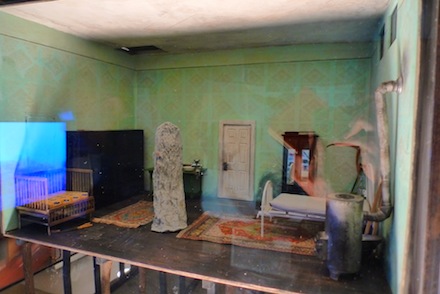 CANADA presented their gallery space at Dependent in addition to a booth at The Armory Show’s Pier 94. One bed on their 14th floor gallery was entirely occupied by Quinn Taylor’s foam sculpture of Groucho Marx’s caricature disguise glasses. The exhibitors played with sound mixers to produce whimsical noises and occasionally announce “This is CANADA” with distorted, robotic voices. 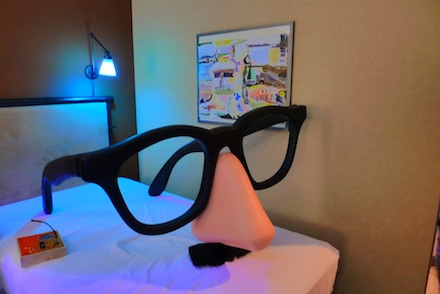 In an interview with Art Observed, Dependent Director Rose Marcus said the fair’s name could be interpreted as a form of institutional critique but from the beginning “couched in humor.”  Marcus added, “Many of the artists you see are represented in both the Dependent and the Independent.”  One goal of the fair was to present a variety of groups and galleries that possess elements of bricolage but that maintain a very professional practice. “It was curated as a tight snapshot of a group of people who are very intelligent, and very do-it-yourself—and that is reflected in their extensive professionalism,” Marcus said.  The Dependent was also conceived to be an art fair that was from the beginning founded on transparency. The Director explained, “The fair’s structure was determined by its transparent economics. Exhibitors were given an hour to install because of hotel check-in times.” In addition, the rooms’ architecture guided the actions of the exhibitors in a way that promoted site-specificity. 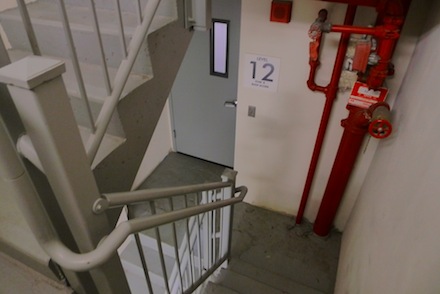 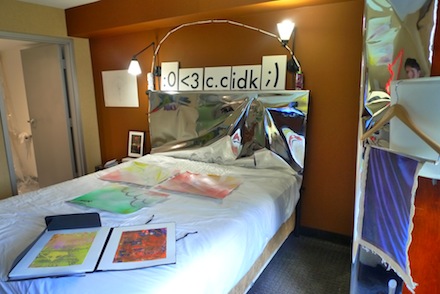 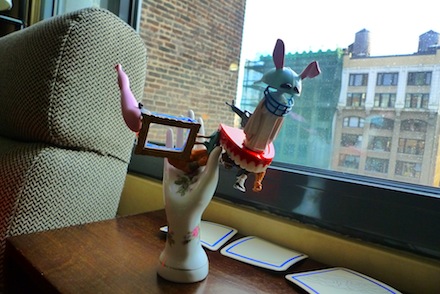 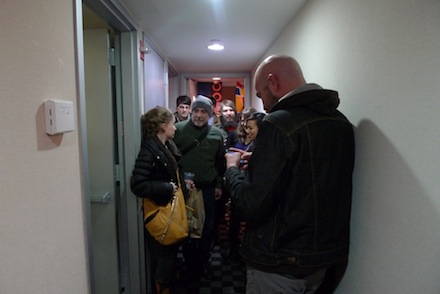 A crowd gathers in one of the hallways. 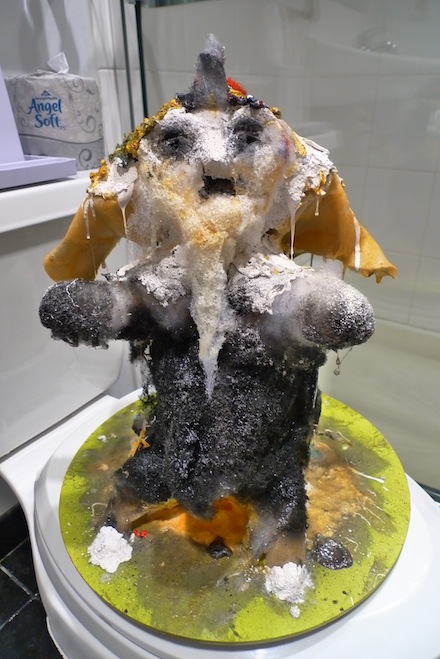 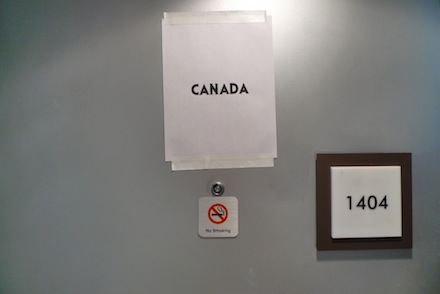 CANADA at The Dependent Art Fair. 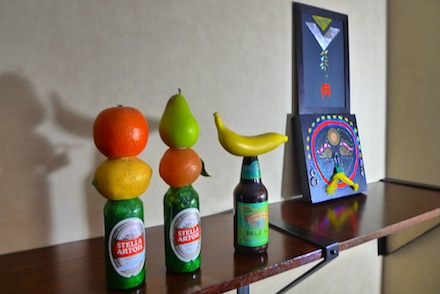 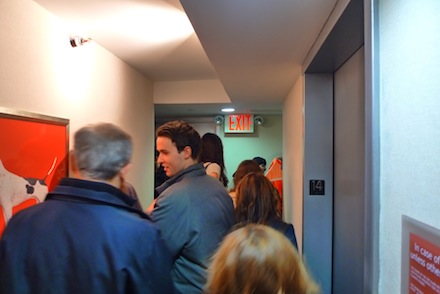 Crowds emerge from the elevator at the 14th floor galleries. 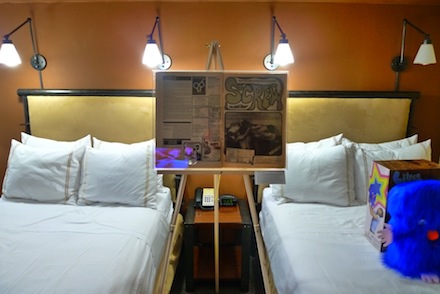 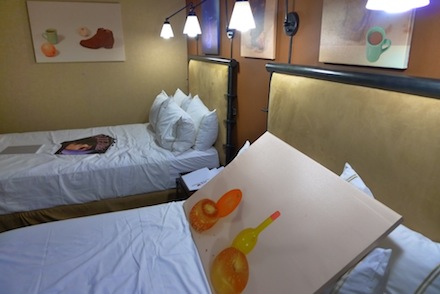 Works by Rose Marcus and Andy Meerow at Evil Freaks. 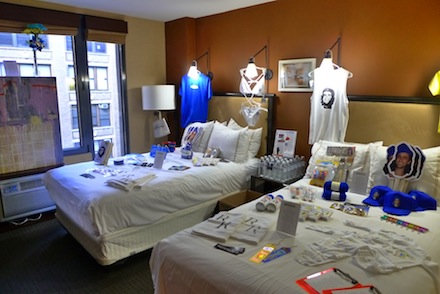 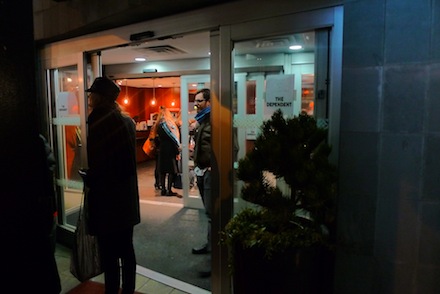 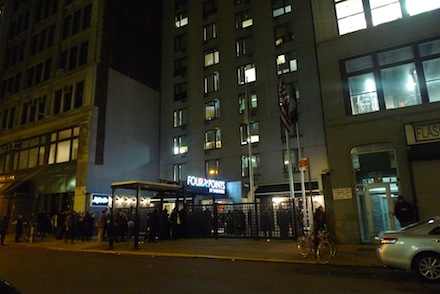 Line outside the Sheraton Hotel.

This entry was posted on Saturday, March 5th, 2011 at 11:13 pm and is filed under AO On Site, Art Fair, Art News. You can follow any responses to this entry through the RSS 2.0 feed. You can leave a response, or trackback from your own site.