The traveling retrospective of artist Félix González-Torres reached its last venue, the Museum für Moderne Kunst (MMK), Frankfurt, on January 29th and will be closing April 25th. The exhibition, curated by Elena Filipovic and titled “Specific Objects without Specific Form”, provides an illustration of the elements of participation, dislocation, and transience that are prominent in González-Torres’s work. For each venue, an artist was invited to curate during the second-half of the show’s run. The three artists-curators–Danh Vo at WIELS, Brussels; Carol Bove at the Fondation Beyeler, Basel; and Tino Sehgal at the Museum für Moderne Kunst, Frankfurt–refer to their own practice as directly influenced by the work of González-Torres. In this retrospective’s specific mode, they aspire to cast new light into the exhibited work, and construct new meanings and interpretations.

Félix González-Torres (1957-1996) is an pervasive figure in contemporary art. A Cuban-born American artist, he was a member of Group Material during the 1980s, a “New York City-based organization of artists dedicated to the creation, exhibition, and distribution of art that increases social awareness” (New Museum brochure, 1986). The show exhibits work representative of González-Torres’s ouevre, which is known for its interactive elements: whoever is installing determines its size and form, and the visitor is encouraged to take one of the individual elements that make up the work (a piece of candy or a sheet of paper) with him or her. These properties are of particular interest to the MMK’s invited artist-curator, Tino Sehgal, who “developed a choreography according to which many objects in the exhibition change form and location every hour until, by the end of each day, roughly six very different constellations of objects will have been visible.” The playfulness of Sehgal’s consistent attention to the presentation attunes with the formal and aesthetic aspects of González-Torres’s “infiltrating” work production. The artist-curator emphasizes the transient and conversational elements in González-Torres’s work, as he finds them to be common denominators with his own practice. Sehgal’s variations on the works are particularly relevant in terms of their engagement to the social awareness that González-Torres tried to cultivate with his practice. 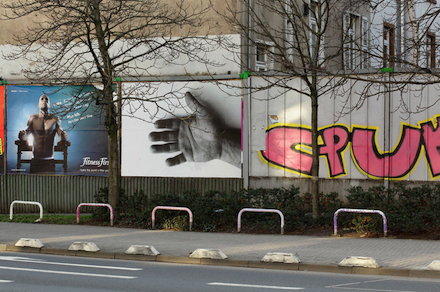 The AIDS crisis during the 80’s and 90’s is a recurring theme in González-Torres’ work (he eventually died of the disease), and reflects upon the fear and reciprocal distrust that escalated between dominant institutions and the demographic groups that were in higher risk of exposure (the gay community, Latinos, and African-Americans). At the time, mainstream public opinion, urged ahead by scientifically inaccurate proclamations by political groups and news media outlets, ascribed responsibility for the crisis exclusively to the at-risk demographic groups, possibly in order to alleviate the nation’s growing moral predicament at having to acknowledge these groups as part of the larger social fabric in an increasingly multicultural country.

The artist’s work also reflects upon the culture wars of the mid-90s, which brought religious and political antagonism as well as other socially-sensitive subjects to bear against artistic practices. At the time, many controversial artworks that defied the muffled sexual repression that permeated political and religious discourse were simply removed from major museums and public institutions. In addition, the funding that the National Endowment for the Arts had formerly to individual artists was revoked. Artists such as González-Torres used this antagonism as rallying cry for a specific brand of cultural cohesion. In spite of adverse circumstances, González-Torres—an openly gay artist and committed social activist—emerged as a strong voice in the art scene. He was, according to art historian Suzanne Hudson, “working with piles of candy, stacks of paper, jigsaw puzzles, billboards, mirrors, and strings of light. It was not that his work was not political—his work is nothing if not political—or did not address sexual politics in the wake of AIDS, but rather than it did not unreservedly flaunt this fact.” Instead, González-Torres codified his critical stance through the use of aesthetic elements of Minimalism, institutional critique, Conceptual art, and installation. The impossibility of finding any evidence of his art production eliciting “immoral” behavior, allowed it to—as Hudson defines it–“infiltrate,” the artistic canon of the time.

Some of the artist’s best-known pieces, which are presented in the MMK show- Untitled (USA Today), 1990; Untitled (Loverboys), 1991; and Untitled, 1998 (in which he stacked a pile of paper sheets)- present subtle meditations on universal themes: love, companionship, interaction, conversation, transience, transformation, dissolution, loss, and death. Many artists who came of age in the 80s and 90s lost lovers, friends, and family  to AIDS, and work from the time is often imbued with emotional turmoil and sexual politics. However, these attributes are not easily perceptible in González-Torres’ work: the viewer has to section through the aesthetic and formal layers of the work in order to access its codified meaning.

As recent developments of censorship in cultural institutions have made evident (i.e. David Wojnarowicz’s video work “A Fire in My Belly” at the Smithsonian), it is difficult to declare González-Torres’s social concerns as resolved issues belonging to the past. The meanings behind the dynamics and aesthetics of his work are as latent as ever, and pose questions that we, the international society, haven’t been able to satisfactorily answer.

This entry was posted on Friday, April 15th, 2011 at 4:56 pm and is filed under Go See. You can follow any responses to this entry through the RSS 2.0 feed. You can leave a response, or trackback from your own site.