Go See – London: Tracey Emin’s major retrospective “Love is What You Want” at the Hayward Gallery through August 29th, 2011 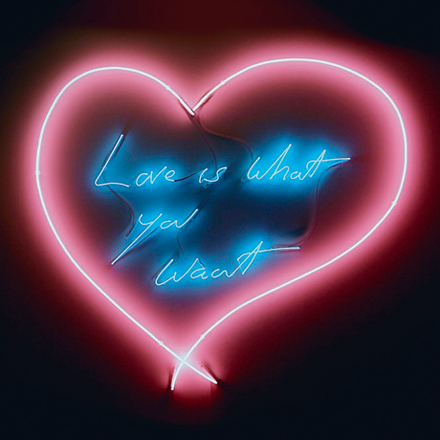 Tracey Emin, Love is What You Want (2011), all images via Hayward Gallery

London’s Hayward Gallery is currently showing Tracey Emin’s “Love is What You Want,” a retrospective show exhibited as part of the South Bank Centre‘s 60th anniversary of the Festival of Britain. Emin, a Turner Prize winner and Royal Academician, spoke at the press preview of the show, saying “This is the biggest defining moment of my art career. I am really proud of the exhibition. I don’t feel I have to defend it, I’m comfortable in it.” Emin is known for the expression of raw sexuality and emotion in her work, which has led to her status as an art world celebrity since having been a seminal part of the YBA’s (Young British Artists), a group led by Damien Hirst and backed by Charles Saatchi that grew in power and popularity in the 90’s.  While most of the YBAs produced work “both oppositional and entrepreneurial,” Tracey Emin’s work is entirely autobiographical, and draws from experiences as a young woman left scarred by rape, abortions and substance abuse (this fact has also led to the accusation that Emin’s work is exploitative of her own personal tragedies, an accusation not helped by a widely publicized outlandish personality).  Emin is also notable in how firmly established as a staple subject of British media she has become.  As such, in the eyes of the general public, the art she produces by default becomes a reflection of  the state of British art in general. 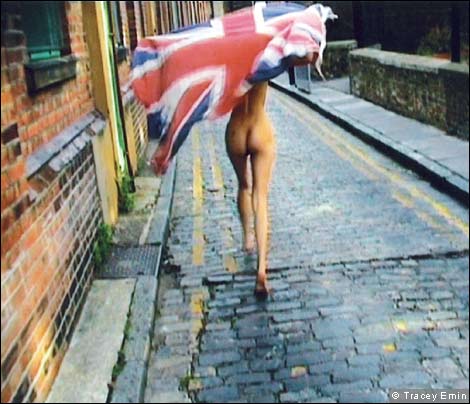 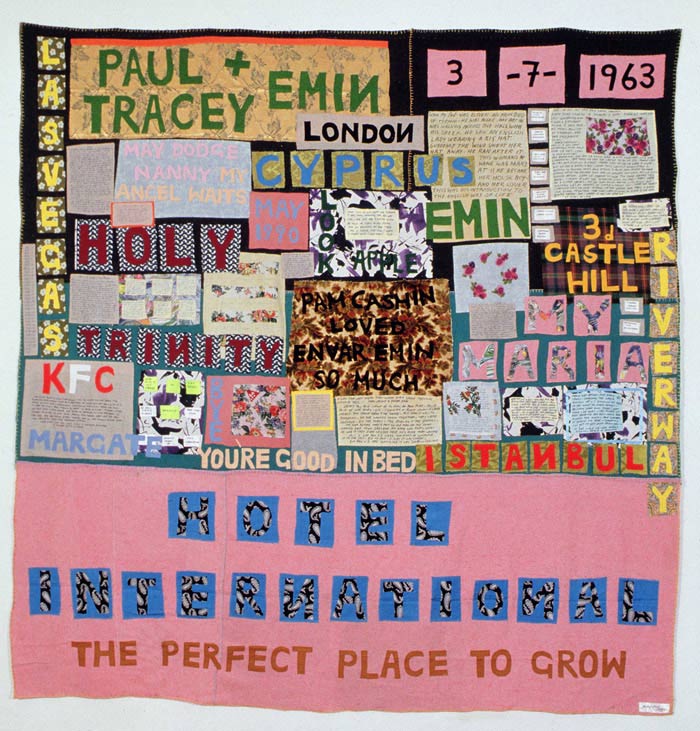 The Hayward show is an overarching retrospective grouped by material, and focuses on themes of abandonment, anger, repression, sexual power and the lack thereof.  Much of Emin’s work is text-based, emblazoned with emotive statements that linger in the space between poetry and hysterical scream. The work comes from throughout Emin’s career, and includes 12 quilted pieces and 16 neon signs, sculptures, monoprints, drawings, paintings, and never-before-seen work including films, and 2011 photographs of the artist running naked down a London street.  Also on display are personal mementos made sculptural, such as the ashes of the unsold artwork from The Shop, Emin’s self-promoting store run with Sarah Lucas that launched her career in 1993.The artist’s oeuvre comes together in the development of a psyche, with the pieces as building blocks reinforcing the artist’s infamous character, outwardly brash, but, at least in the work, consistently victimized. 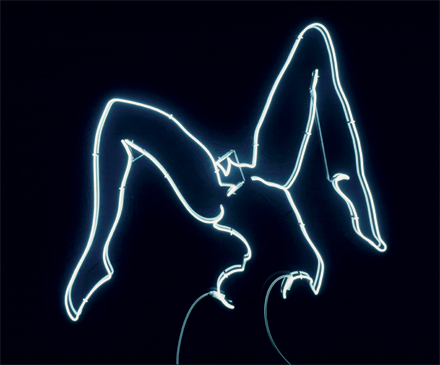 Emin was producing much of her art alongside more male-dominated work whose “irony and distance” was the available vocabulary; hers can be seen as complacent with that attitude in certain ways, but also clearly exists specifically as a reaction to it. For all of Emin’s violence, no piece exists that does not admit doubt, and most express a wistfulness that is at odds with the YBA attitude (you can’t exactly imagine Damine Hirst lamenting: “Oh Christ I just wanted you to fuck me. And then I was greedy, I wanted you to love me.”)  Her work is often tentative, asking for forgiveness, most noticeably in the monoprints-indexical gestures work with what they depict by lacking the confidence to have been drawn directly. This same self-doubt comes across in the mark-making and aesthetic techniques in the quilts, neon pieces and paintings- messiness deflected by confessional declarations. 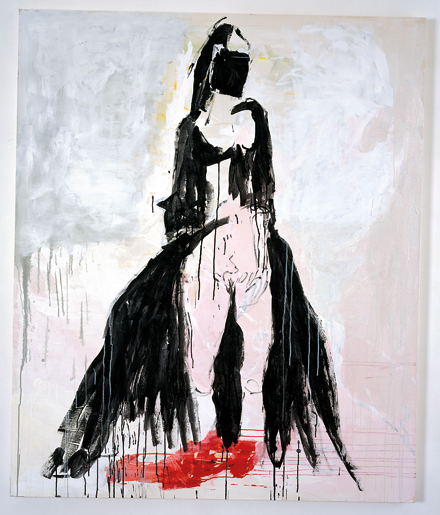 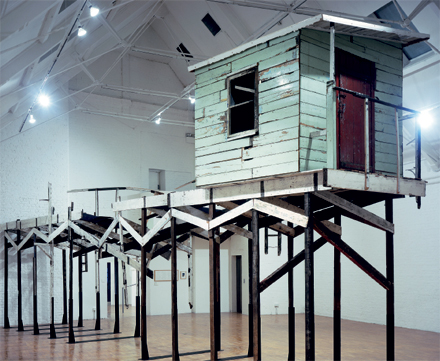 The issues addressed in Tracey Emin’s work are everyday and often unavoidable occurrences in the modern feminine experience- emotionally wrenching sexual experiences, female competitiveness and viciouness, abortion, objectification and despair, and it seems that her celebrity at least at partially rests on the fact that she has become a modern hero for admitting to these conditions. For a certain generation of women, works like Emin’s famous “Bed” are instantly relatable in a distinctly feminine way- this is the day-to-day, which, though unreasonably cast as shameful and muffled, is presented unapologetically, shrugging at the characterization “hysterical female.” While her work, to many, may seem an outdated memory of a lifestyle and dependent on shock-value, it is clear there is a wide audience interested in seeing her dirty laundry, though whether this is a result of a tabloid fascination or genuine artistic appreciation remains unclear. 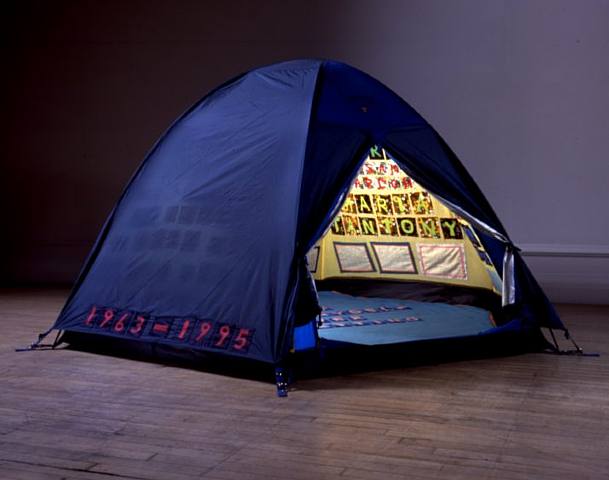 The artist’s two most well-known works are conspicuously missing from this exhibition. “Bed,” for which she was awarded the Turner Prize, is set to be included in a 2012 Saatchi show and consists of the artist’s unmade bed, transported to the art gallery along with fresh detritus of the artist’s life-used condoms, stained sheets, empty Absolut bottles and dirty underwear. “Everyone I Have Ever Slept With 1963-1995” was a tent with the names of all of Emin’s previous sexual partners embroidered on into a tent that further boosted her celebrity in Saatchi’s 1997 Sensation exhibition, but was destroyed in a fire in 2004.

Tracey Emin has stayed in the public eye for close to twenty years. In addition to the widespread coverage of this show, Emin was in the media last month for her opening of Turner Contemporary in home-town Margate with Jools Holland; also as of recently, Tate Britain is featuring a room in their collection devoted entirely to Emin’s work.  She will also be having a  solo show at White Cube in October 2011, and is scheduled for solo shows at the Brooklyn Museum and MOCA Miami. The Hayward Gallery will be showing “Love is What You Want” through August 29th, 2011.

This entry was posted on Monday, May 30th, 2011 at 10:41 am and is filed under Go See. You can follow any responses to this entry through the RSS 2.0 feed. You can leave a response, or trackback from your own site.