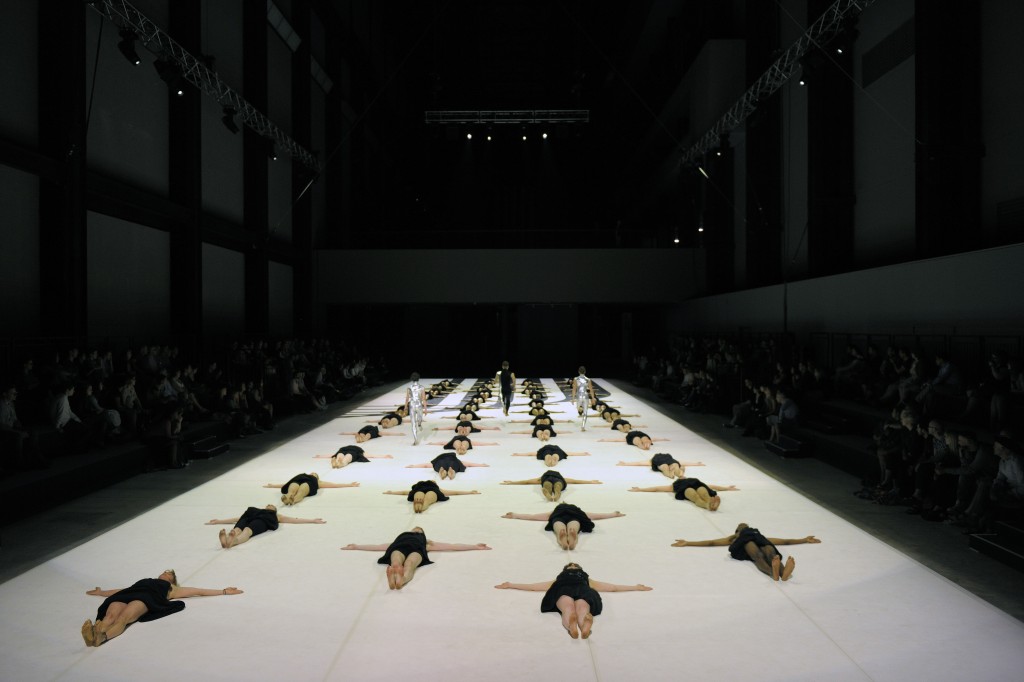 Michael Clark Company occupied the Tate Modern‘s Turbine Hall last week, continuing last year’s Come, Been and Gone choreography project, in the form of a performance entitled th.  The commission was performed by the dance company’s corps of thirteen as well as forty eight volunteer performers.  Clark’s sell-out choreography was set to an 80’s and 90’s soundtrack of Bowie, Pulp, Kraftwerk and Relaxed Muscle, which pounded through the hall throughout the 90-minute performance. 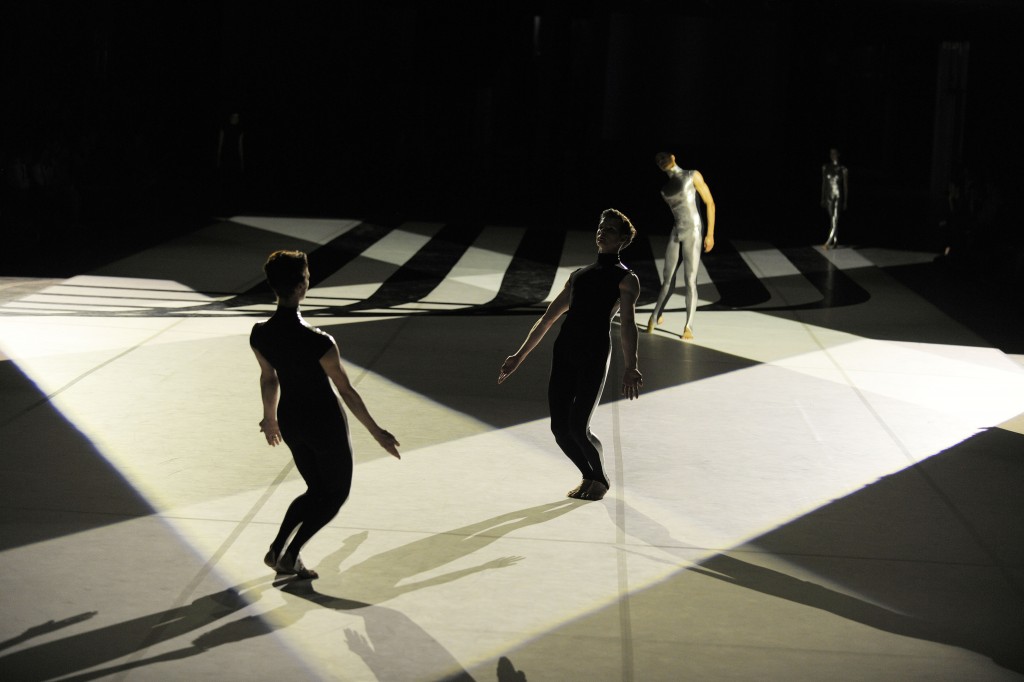 Elegantly cramped in the lower reaches of the Turbine Hall, the audience was arranged in a horse-shoe lining the monochrome ‘stage’.  Open to the incline of the Hall’s floor, necks were craned and shoulders huddled under the gaze of the lighting designed by Charles Atlas.  The set up was powerful and clean, with sharp lighting that made the entrance to the Hall invisible beyond the floor-level stage.  The sense of equality between the audience and the dancers – united in proximity, light and sound – was maintained throughout the dance, but most obviously stated in the first of the ten pieces, when forty eight non-professional dancers, clad in loose black towel, opened the show.  Charmingly proud and subtly out-of sync with one another, the group earnestly patterned themselves across the stage, before scuttling, en masse, back off to welcome the professionals.  This amateur contribution lent an air of accessibility to the dramatic performance. 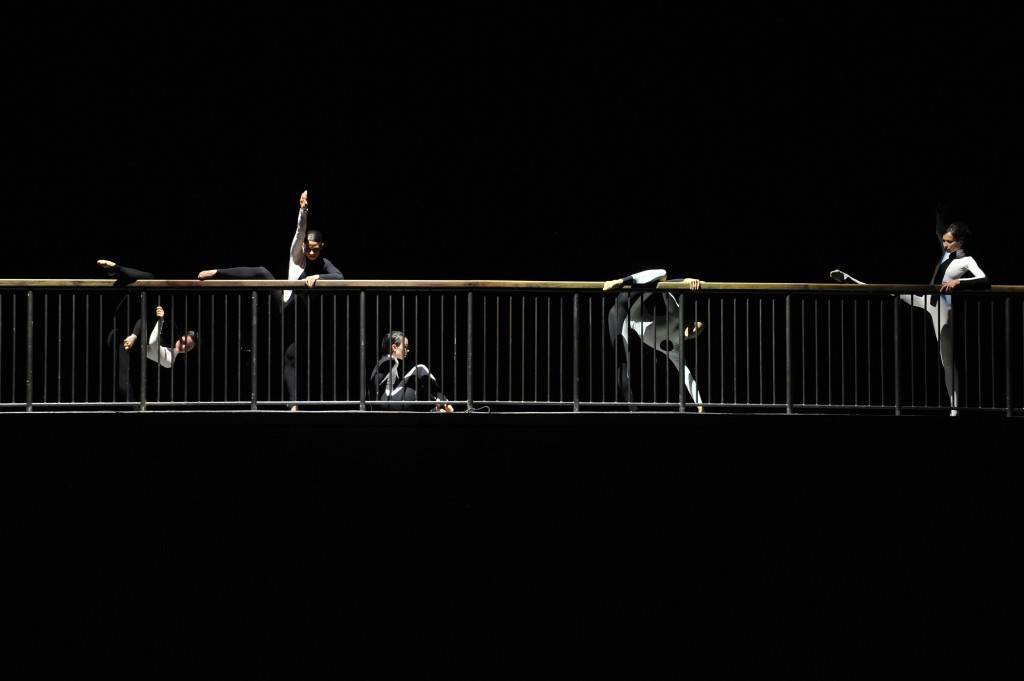 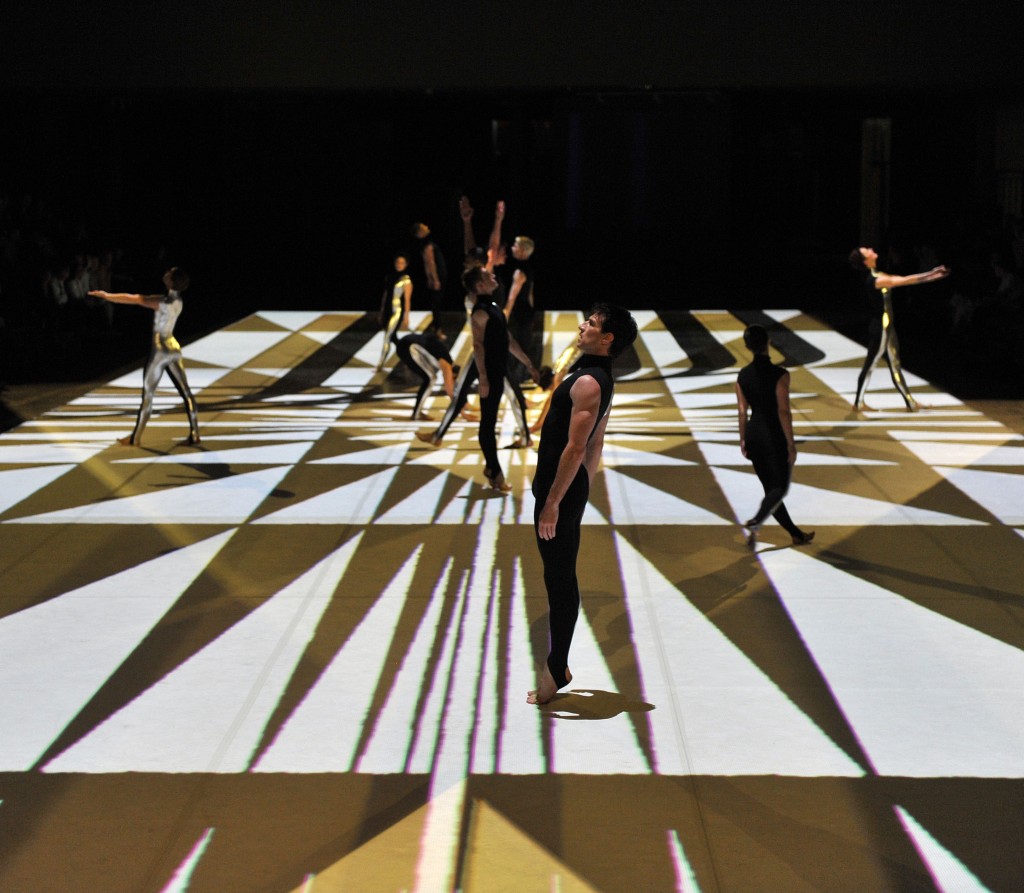 The company’s dancers, dressed in Stevie Stewart and Michael Clark costumes, performed fluid choreography broken up by moments of dancers falling into controlled splutterings across the floor, while others danced en pointe, and others still mimicked robotic limbs.  The performances were full of lust, but also reminders of slow-burning courtship and loneliness, electrified by the thudding soundtrack of cult-classics in a soundscape designed by Martyn Ware and Andy Pink.

th continues in the wake of Michael Clark Company’s exhibition last year, which was also performed in the Turbine Hall and similarly committed to audience participation.  This collaborative approach to dance, using film, fashion, audience and electronic music to enliven the choreography is definitive of Clark’s work.  There is something unbelievably interesting about th, but also haunting.  It pays homage to the structure, acoustics and cosmopolitanism of the Turbine Hall, but also to a life lived and recollected; a cultural mythology impenetrable to most of the audience.  Clark’s public reflection on this time, assumed by the soundtrack of th, suggests it shaped the man he became and the work he made, lost control of, and then remembered again in 2011.

This entry was posted on Sunday, June 19th, 2011 at 12:41 pm and is filed under AO On Site. You can follow any responses to this entry through the RSS 2.0 feed. You can leave a response, or trackback from your own site.