Go See – New York: Francis Alÿs, ‘A Story of Deception’ at the Museum of Modern Art and MoMA PS1 through August 1st, 2011 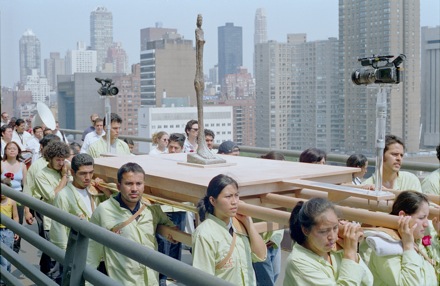 Initiated in collaboration with, and previously presented at, Tate Modern, London and WIELS Centre of Contemporary Art, Brussels, Francis Alÿs’s survey show entitled ‘Francis Alÿs: A Story of Deception’ is now on view through August 1 at both MoMA and MoMA PS1. Largely drawing upon MoMA’s collection of works from the Belgium-born artist and grouped around three recent acquisitions—Re-enactments (2001), When Faith Moves Mountains (2002), and Rehearsal I (Ensayo I) (1999–2001)—the New York iteration of ‘Franicis Alÿs: A Story of Deception’ brings together a sizeable amount of the artist’s works, which characteristically emphasize performance and repetition with results that range from absurd to stunning. 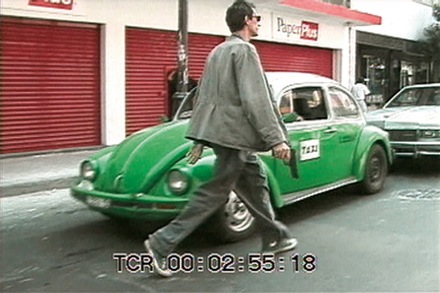 Using poetic and allegorical methods, Alÿs explores the social realities of political concepts, which touch on, but are not limited to, the cyclical nature of change in modernizing societies or the urban landscape and patterns of economic progress. The exhibition’s organizers—Klaus Biesenbach, MoMA’s Chief Curator at Large and Director of MoMA PS1 and Cara Starke, Assistant Curator, Department of Media and Performance Art, MoMA—attempt to offer insight into these ruminations through the inclusion of studies, notes, texts and newspaper clippings displayed on glass-topped counters. 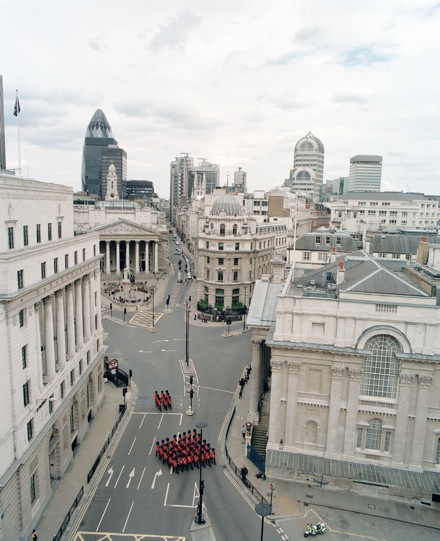 Profuse with video and somewhat mired by the aforementioned “back story” materials, ‘A Story of Deception’ is punctuated by a smattering of paintings which bring welcome equilibrium to this exhibition. Most notable of these is Le Temps du Sommeil (1996―present) at MoMA. An ongoing series of more than 100 small canvases— approximately 4.3 in. x 6 in. each—Le Temps du Sommeil is meant to serve as an evolving record of the artist’s visual ideas that have developed from actions or preceded them. 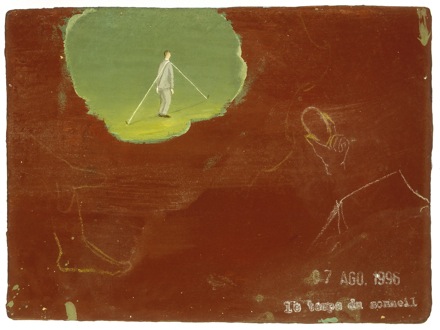 Alÿs’s videos typically fall in line with the unspoken tenant so many artists utilizing ‘neo-conceptual’-performance-video documentation seem to follow—they are amateurish in quality.  A standout from this pitfall is Guards (2004), which can be found at the MoMA PS1 portion of the show. In this single-channel video Alÿs orchestrated the movements of 64 Royal Guards dressed in red tunics, bearskin caps and polished black boots who entered different deserted streets in The City of London unaware of each other’s location. Upon running into each other, they fall into step, marching together as they seek the remaining, trudging guards with whom they must join.

Perhaps an obvious question is “why two venues?” The decision to stage the exhibition at both MoMA and MoMA PS1 comes out of Alÿs’s 2002 MoMA commission entitled The Modern Procession, which marked the Museum’s relocation to MoMA QNS during the renovation and expansion of its Midtown building. Here, the work is presented as an installation consisting of photographs, drawings and a two-channel video documenting a ceremonial procession, in which Alÿs, musicians, and various participants traveled from MoMA to MoMA QNS, carrying artist Kiki Smith on a palanquin along with representations of works in the Museum’s collection that included works by Pablo Picasso, Marcel Duchamp, and Alberto Giacometti.

This entry was posted on Sunday, June 12th, 2011 at 1:16 pm and is filed under Go See. You can follow any responses to this entry through the RSS 2.0 feed. You can leave a response, or trackback from your own site.