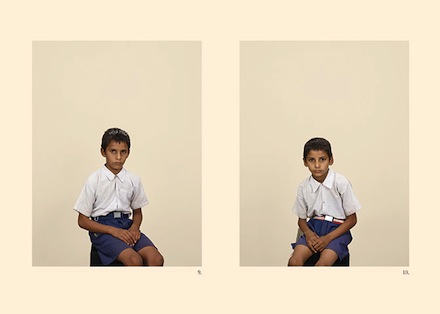 Taryn Simon, excerpt from A Living Man Declared Dead and Other Chapters (2011), via The Guardian.

Young photography star Taryn Simon opened her solo exhibition, “A Living Man Declared Dead and Other Chapters” at London’s Tate Modern on May 25th.  The exhibition is composed of portraits displayed in horizontal rows of family trees according to bloodlines, which Simon researched over a four-year period.  As the artists says, she’s “drawn to projects that end up being incredibly laborious” – though the photos themselves only took two months to complete. 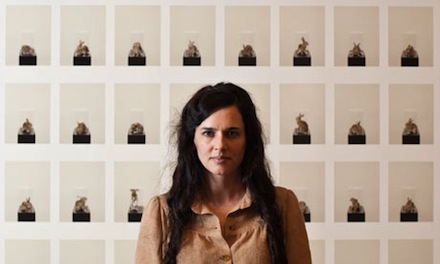 Taryn Simon in front of an excerpt from A Living Man Declared Dead and Other Chapters (2011), photo by Antonio Zazueta Olmos, via The Guardian. 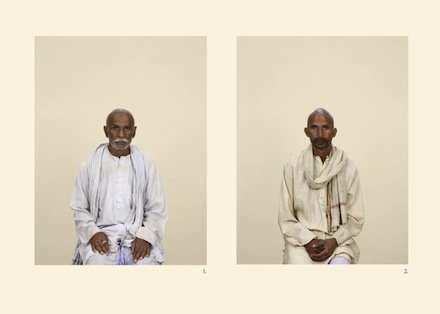 Taryn Simon, excerpt from A Living Man Declared Dead and Other Chapters (2011), via The Guardian.

“A Living Man Declared Dead and Other Chapters” takes its name came from the chapter on Shivdutt Yadav and his family, who happen to be located in Uttar Pradesh, a state in northern India that is India’s most populous, where government officials are sometimes bribed to declare certain people dead in order for their relatives to dispossess them (so that they might take advantage of scarce property).  In other words, the people declared dead are living dead, though their relatives know this.  Simon is interested in the idea of genealogy and its consequences; for example, what are the consequences for a living person who has been declared dead?  How might an image be a proof of life versus a proof of death? 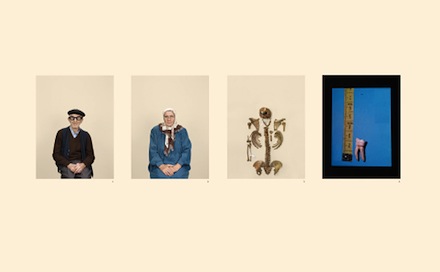 Taryn Simon, excerpt from A Living Man Declared Dead and Other Chapters (2011), via Time Out London.

All of the photographs are simply composed with blank backgrounds, and often resemble still-life portraits, as did the photos in Simon’s earlier “Contraband” in which she photographed illegal imports at JFK airport.  There are eighteen family bloodlines, all with an interesting twist, some of which are blanks, and the dead are not photographed, as the images are of living bloodlines.    The bloodline images of Bosniak Muslims, who lost family members the Srebrenica massacre – the largest massacre of people in Europe since World War II – often include absences on the wall (or a picture of a tooth or skull) to replace a missing family member.  Then there is the bloodline of Ukrainian orphans, who are removed from the orphanage when they turn sixteen, only to often end up in lives of infused with poverty or crime.  Also included, in addition to the human subjects, are photographs of live rabbits that are descendants of those that came from the UK to Australia, only to wreak havoc among the new surroundings, potentially bringing into question attitudes toward immigration. 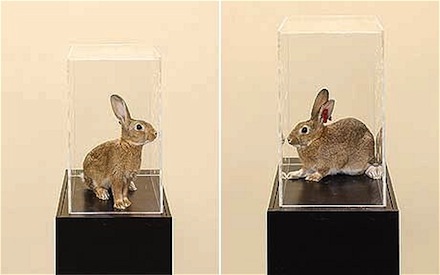 Taryn Simon, excerpt from A Living Man Declared Dead and Other Chapters (2011), via Gagosian.

All these genealogies are triumphs of research, and combined with the photographs, press one to look for patterns.  However, were it not for the information beginning each family tree, the viewer would likely be lost as to the context, and find the portraits difficult to put into a coherent narrative due to the paucity of information and overabundance of photos.  Simon’s work thus mixes photojournalism and conceptualism, and often seems to push Simon into the ‘political artist’ category, a label she rejects.

This entry was posted on Monday, July 4th, 2011 at 11:49 pm and is filed under Go See. You can follow any responses to this entry through the RSS 2.0 feed. You can leave a response, or trackback from your own site.