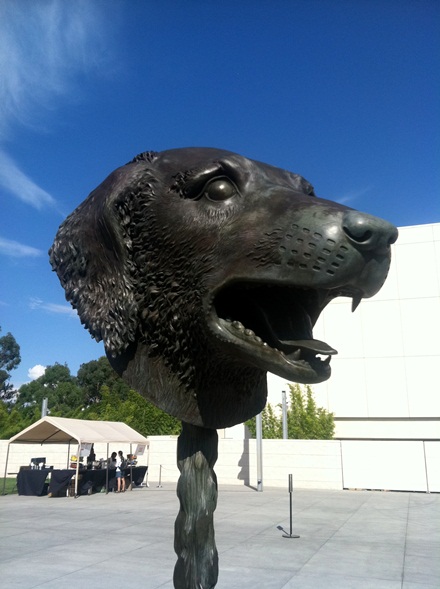 Detail of Dog head from Ai Weiwei’s Circle of Animals/Zodiac Heads (2011) All photos by Megan Hoetger for Art Observed.

The installation of the first major public sculpture work by well-known Chinese artist Ai Weiwei opened at the Los Angeles County Museum of Art (LACMA) on August 20th, its West Coast stop on a global tour. Encircling the elevator up from the parking structure in the North Piazza of LACMA’s sprawling campus, Circle of Animals/Zodiac Heads functions as a marker of a heavily trafficked threshold. Its position outside the parking is particularly suited to the car-dominated geography of Los Angeles, but it also allows multiple points of approach for those visitors ambling between the Ahmanson and Broad buildings, or just arriving through the Chris Burden street lamps. 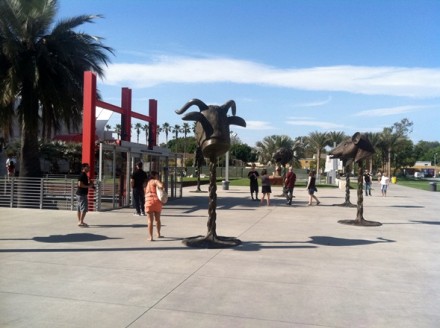 The bronze heads are not only monumental in their scale, standing 10 feet tall and weighing 800 pounds each, but also in the rich textural logic that defines their surfaces and the large, gaping mouths on each, each a distinct expression. The hard geometric tiling that describes the snake’s scales, for example, speaks to the coldness associated with the reptile, whereas the rooster’s surface is wild and alive with an intricate feather pattern. 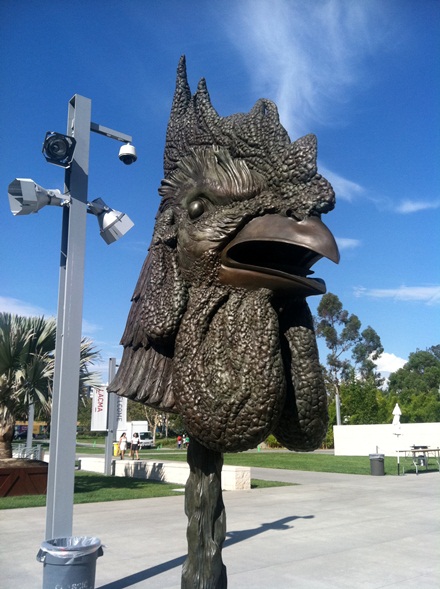 In Circle of Animals/Zodiac Heads, the artist has made his own interpretations of the missing heads based on drawings and descriptions of the original animal-head waterspouts of the Haiyan Tang fountain-clock. The fountain-clock stood at the entrance to Haiyan Tang—or the Palace of Calm Seas—at the Yuan Ming Yuan compound in Beijing. Cast around 1750 under the direction of Italian and French Jesuits working in the Qing dynasty, the fountain was a centerpiece of the vast complex. So wonderful were its descriptions that it became a catalyst for the widespread popularity of Chinese gardens in Europe at the time. In 1860 during the Second Opium War, Anglo-French troops looted the palace, taking the heads and destroying Yuan Ming Yuan; of the twelve original heads, only seven remain today. Ai Weiwei’s choice to reconstruct these particular objects relates to their current status as national treasures, as they have become powerful symbols for a fervent and at times contentious nationalism in China. 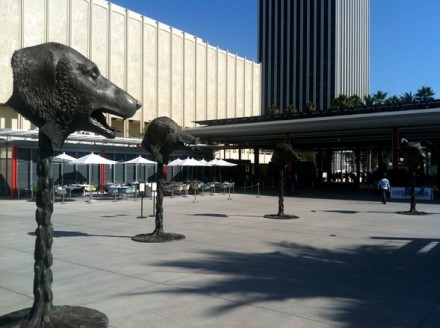 Installation of Ai Weiwei’s Circle of Animals/Zodiac Heads (2011), at LACMA.

It is through such objects that the artist understands, interprets, and intervenes into his society. These interventions foreground the cultural and political framework within which China’s history (and all histories for that matter) are constantly performed and re-performed. Built under Qing dynasty emperor Qianlong, a Manchurian ruler and foreign monarch, the fountain’s status as a national “Chinese” treasure is questionable, as the artist postulates in an interview on the sculpture’s role in current Chinese cultural politics. With this question mind, he employs appropriationist tactics to foreground the heads’ position as “cultural currency” in a high stakes game of global cultural politics wherein their symbolic value and, by extension, historical meaning are shifted and adapted to fit the needs of the present.

They are also, as Ai Weiwei emphasized when asked about their role as public sculpture, something to which everyone can relate because, put simply, everyone has a zodiac sign. Many visitors while I was there were eager to have their picture taken with their animal. Whatever one’s interest, whether it be the political critique undertaken by Ai Weiwei in his Duchampian gesture, or your own belief in the Chinese zodiac and its role in your life, this piece is worth some time. 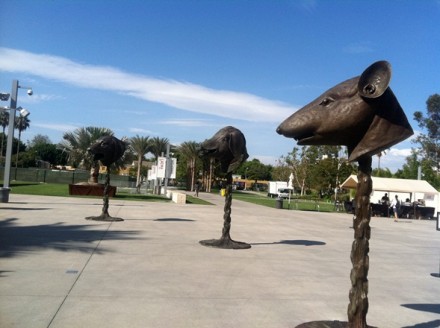 The Rat, Boar, and Dog Zodiac Heads in Ai Weiwei installation at LACMA (2011)

Circle of Animals/Zodiac Heads resonates well at LACMA, an encyclopedic museum, which also houses a large collection of Chinese art from the Neolithic period up through the Qing dynasty. Ai Weiwei’s work creates a dialogue with the past, helping visitors to reimagine the permanent collection in relation to contemporary art and politics.

This entry was posted on Saturday, September 3rd, 2011 at 4:02 pm and is filed under AO On Site, Art News, Go See. You can follow any responses to this entry through the RSS 2.0 feed. You can leave a response, or trackback from your own site.

One Response to “AO On Site – Los Angeles: Ai Weiwei’s Circle of Animals/Zodiac Heads at Los Angeles County Museum of Art through February 12, 2012”