April 15th, 2021
REFERENCE LIBRARY
Home » Go See – New York: Willem de Kooning: A Retrospective’ one of the most important exhibitions of the year, at MoMA through January 9, 2011

Go See – New York: Willem de Kooning: A Retrospective’ one of the most important exhibitions of the year, at MoMA through January 9, 2011

Currently on view at MoMA is Willem de Kooning: A Retrospective. Impressive in its depth and breadth, it is the first retrospective since the artist’s death. De Kooning (1904 – 1997) is hailed as one of the most important and prolific artists of the previous century. 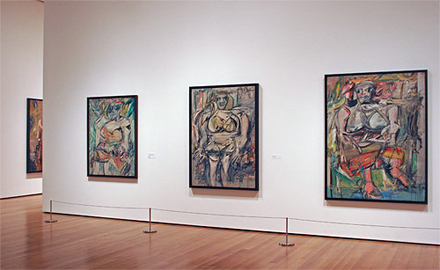 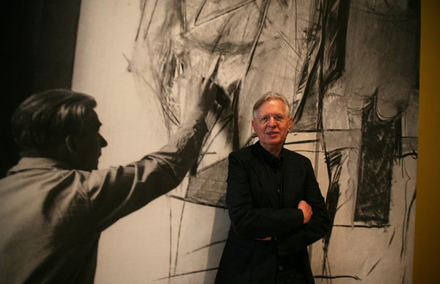 The show’s curator, John Elderfield, stands against a backdrop depicting the artist at work. Image via NYTimes. 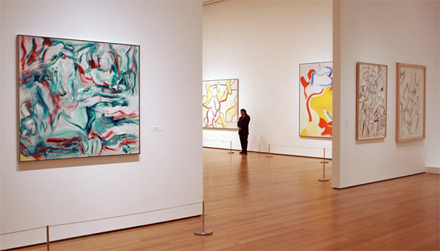 The impact of such a comprehensive showing of an artist’s oeuvre is almost always immeasurable, but Art in America took a playful stab at it by including a statistical breakdown of the exhibition in their September issue. According to numbers provided by MoMA’s chief curator emeritus John Elderfield and curatorial assistant Lauren Mahoney, the exhibition is comprised of approximately 193 works, 100 of which were lent (30 of whose owners lent anonymously). Although the pieces traveled from 8 countries including the U.S. (the longest trek being 10,000 miles from Australia), a surprising 80 works came from NYC-area collectors and museums. The largest lenders to the exhibition are the Metropolitan Museum of Art, the Hirschhorn Museum, and the Art Institute of Chicago, but a solid 13 paintings are from MoMA’s permanent collection. To this list one could add other staggering figures: the 17,000 square feet of gallery space the exhibition occupies, the 6 years it took to plan and execute, and the total estimated appraised value of the works, which is rumored to be between $3-4 billion—making this the most expensive exhibition ever put on by MoMA. 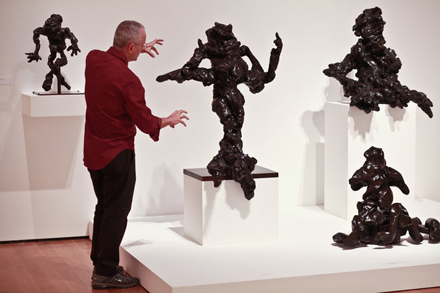 Installation view with sculpture. Via NYTimes.

The formal organization illuminates Elderfield’s wish for a show that “demonstrates how de Kooning never followed any single, narrowly defined path, repudiating the modernist view of art as developing towards an increasingly refined, all over abstraction to find continuity in continual change.” In his opening remarks, Elderfield ruminated that the artist had “slipped somewhat from the broad consciousness” and was “in need of a fresh look.” 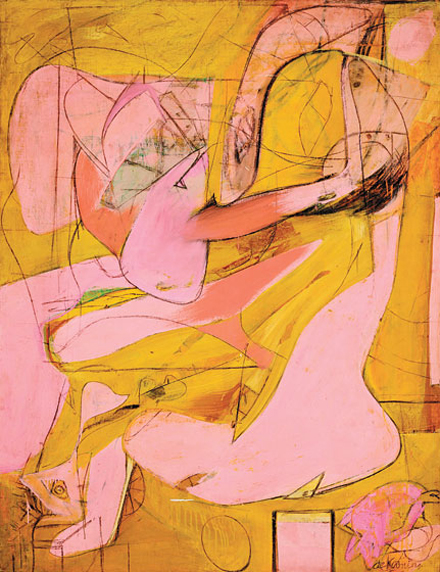 So far, the exhibition is receiving rave reviews. In his New York Times review, Holland Cotter writes, “in its scale, crème-de-la-crème editing and processional sweep, it’s MoMA in excelsis, and for many people it will probably represent this institution’s history-writing at its best.” New York Magazine’s Jerry Saltz praised the show “the most piercing, inexhaustible, and relentlessly intense full-on career survey I have ever seen in this country” remarking, “It could only be better by being bigger.” New Yorker art critic Peter Schjeldahl concurs, calling the exhibition “way too small.” In his audio slideshow offering insight into some of the works on view, Schjeldahl makes it personal, commenting “de Kooning is my absolutely favorite artist of all time, and I think the greatest of American painters.” He lauds Pink Angels (1950) as “the best painting made in the world in that year” and Woman, I (1950-52) “the most controversial painting ever made in America.” Also offering a deeper look is an interactive feature from the New York Times, which pairs several works (featuring hi-res zoom and infrared images of the back of the canvas) with audio commentaries from Elderfield.

The didactic text setting up the exhibition quotes de Kooning as saying, “Art should not have to be a certain way,” an assertion that makes itself evident in the wildly oscillating stylistic nature of the work. He also famously stated, “I never was interested in how to make a good painting . . . but to see how far one could go.” Other quotations that shed light on the work are: “Being anti-traditional is jut as corny as being traditional”; “flesh was the reason why oil painting was invented”; “all painting is an illusion” and, “one thing nice about space is that it keeps on going.” 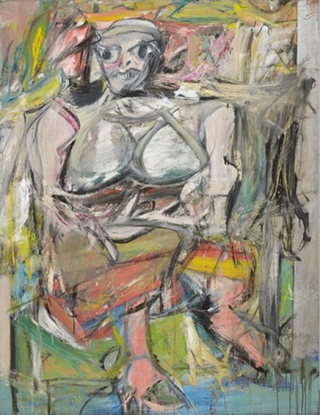 The flow of the show is perfect; it begins with early academic works created in de Kooning’s native Holland, building momentum until Excavation (1950), the artist’s textbook masterpiece. Included in the show is a variety of media: paintings, drawings, prints, and sculptures. The artist’s most famous works—Pink Angels (c. 1845), Excavation (1950), and the Woman series (1950-53)—do not disappoint. Even more fascinating, however, are the smaller charcoal sketches and the often overlooked sculptures whose form lands somewhere between Boccioni‘s Futurist masterpiece Unique Forms of Continuity in Space and burnt Louise Bourgeois phalluses.

In what could be seen as a bold move, the exhibition gives a great deal of prominence to de Kooning’s late paintings of the 1980s. The works are characterized by what Elderfield calls “flat ribbon of forms” —a thinness of the paint surface and a quality of color and line that bears a striking resemblance to a somber Roy Lichtenstein. At this point in his life, de Kooning was suffering from Alzheimer’s disease, and was hardly able to sign his name when some of the works, mostly untitled, with one named The Cat’s Meow (1987), were painted. “When this late work appeared at MoMA in 1997,” writes Holland Cotter, “the year de Kooning died, some dismissed it as a mere byproduct of pathology.” Jerry Saltz explains, “Some of the paintings from this period are tainted by whispers: that de Kooning was being heavily aided by his assistants, that his developing dementia was robbing him of intellect,” but that he views de Kooning as “an artist fully in control.” An essay in the exhibition catalog asserts de Kooning in this time as “alert and active in the studio.”

Saltz describes these last paintings as “Exquisitely lyrical looping locutions, lone lines of coral-reef color, umbilical curves: They curl and cut back in viscous fields of mysterious expanding space.” Of The Cat’s Meow (1987), Schjeldahl said, “to me it’s astonishing and it suggests a whole new kind of picture… so that when last seen, de Kooning was still inventing.” Hitting the visitor like a breath of fresh air in the last gallery, these stripped-down paintings are powerful, exuding what Elderfield calls a “rare quality of liberation.” They make a surprising reference to de Kooning’s roots in decorative design, and may inspire the visitor inclined to loop back around for another look.

Some visitors may wonder whether MoMA’s mounting of this show is an attempt to address the de Kooning gap in the museum’s collection, which was made apparent in their AbExNY show (2010-2011), but Elderfield dismissed such claims in his opening remarks, although he joked that no one at MoMA would be displeased if one or several of the hundred lenders decided the work looked too good in the museum to ship back. According to ARTnews, “The current record for a de Kooning at auction is the $27 million paid for Untitled XXV (1977) in 2006.” The valuable museum time is sure to increase the market price of the work.

Schjeldahl sums up the retrospective in writing, “The samplings of his several periods, in which he continually reshuffled aesthetics of figuration and abstraction, whetted my appetite for more of each. The show demolishes a canard that the artist’s work declined after the nineteen-fifties. Only his fame did.” It is clear that De Kooning is back in full force.

The exhibition is open to the public from September 18 to January 9, 2012. 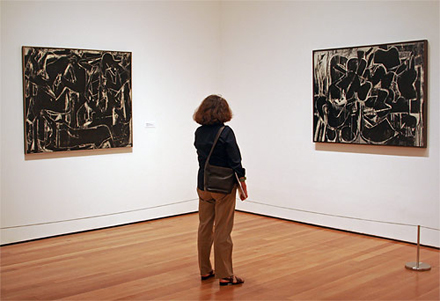 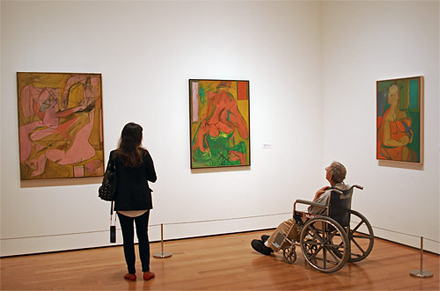 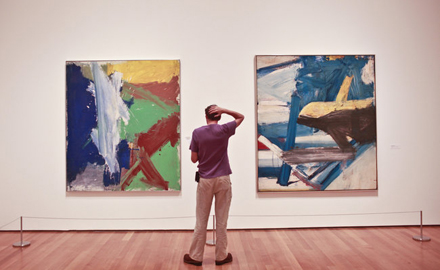 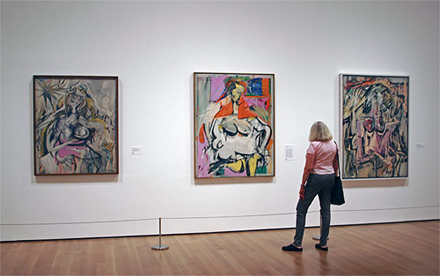 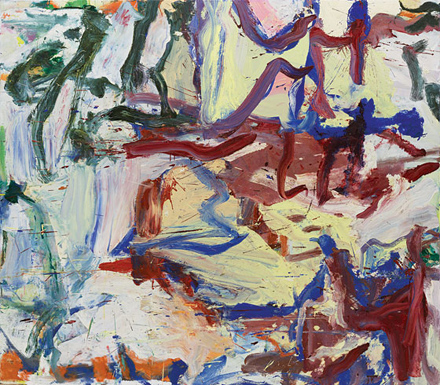 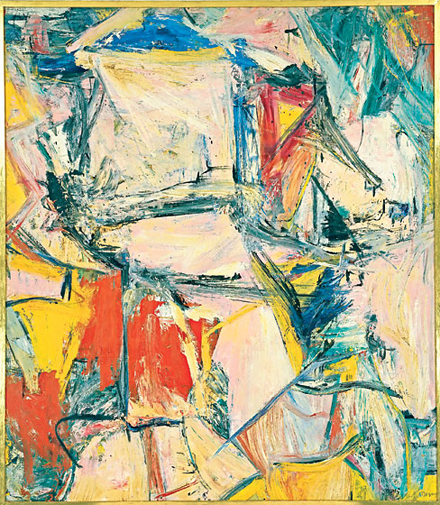 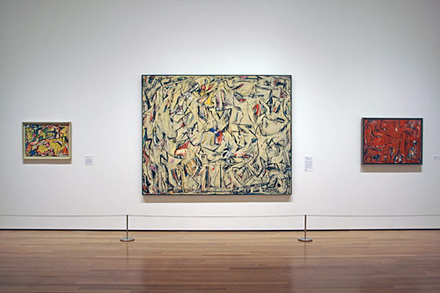 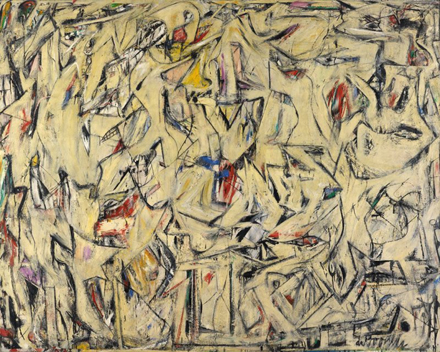 Excavation (1950). Via the Art Institute of Chicago. 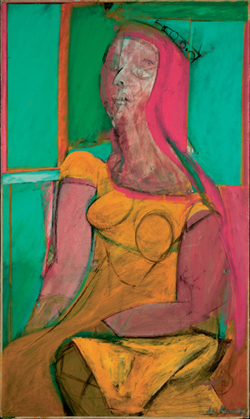 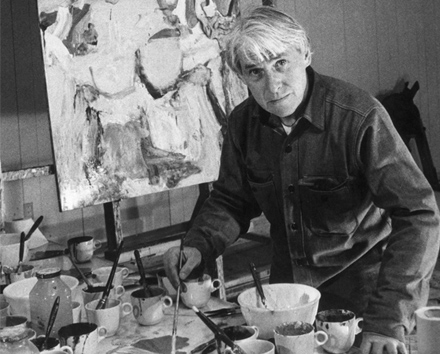 The artist in his studio. Via NYMag.

This entry was posted on Monday, September 26th, 2011 at 12:43 am and is filed under AO On Site, Go See. You can follow any responses to this entry through the RSS 2.0 feed. You can leave a response, or trackback from your own site.

One Response to “Go See – New York: Willem de Kooning: A Retrospective’ one of the most important exhibitions of the year, at MoMA through January 9, 2011”