Currently on view at the Carolina Nitsch Project Room is Rikrit Tiravanija’s print project (Untitled) 2008-2011 (the map of the land of feeling) I-III, a three-part scroll three feet high and totaling 84 feet in length. The scroll took three years to complete, created using various techniques of screen-printing, offset lithography, and inkjet printing, finally producing elaborate layers that chronicle the artist’s physical and temporal passage of the last 20 years of his life. Tiravanija lives a perpetual negotiation of cultures, born to Thai parents in Buenos Aires and raised in Argentina, Bangkok, Ethiopia, and Canada. His career as an artist maintains his constant state of itinerancy and is gracefully recorded as “the map of the land of feeling.” 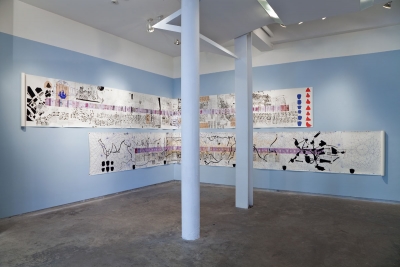 Print reproductions of the artist’s passport from 1988-2008 run in a continual strip across each scroll, documenting years of his constant movement across the globe. Among the passports, Tiravanija elegantly weaves an array of images documenting the physical spaces and social characteristics of locations he has visited. City maps, abstracted mazes from archeological and architectural sites, time zone lines, and illustrations comprised of arrows indicating urban flow add texture to the scroll. Also included are handwritten recipes from his notebook, a direct reference to his tradition of cooking for audiences.

Silhouettes of Duchamp’s Fountain and Marcel Brotheaters mussel pots appear throughout the scroll as well, a nod to modernist artworks that were fundamental to inspiring him as an artist. Tiravanija decided to make art after seeing Duchamp’s Fountain, the notorious readymade sculpture of a urinal, a pivotal piece attacking the traditional conventions of art. Brotheaters’ mussel pot sculptures are emblematic of the fusion of art and life, and refer to Tiravanija’s practice of cooking as art. Both pieces have clearly made a deep impact on Tiravanija, as they disrupt the boundaries of art and life and are intended to provoke humor while forcing the viewer to reflect on the conventional roles of the art object. 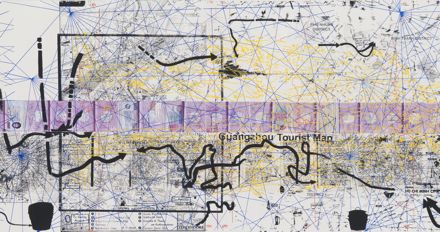 Tiravanija is best known for his immaterial practices—work that inhabits a place between performance and installation that confuses the conventional roles of art, artist, and viewer by inviting social engagement. He became famous in the 1990s for his first cooking-as-sculpture pieces where he cooked and served Thai dishes to interested gallery-goers, rejecting the art object and changing the audience’s role from passive viewing to active participation. Since then his work has remained focused on experience and collective participation. He is often associated with  “Relational Aesthetics,” a term coined by French curator and art critic Nicolas Bourriaud, referring to artwork that produces social encounters in which meaning is created collectively, as opposed to private and individual consumption.

Though a shift in medium, the scrolls maintain Tiravanija’s tradition of creating work that is both autobiographical and relational to the spaces and societies he inhabits.

This entry was posted on Tuesday, October 4th, 2011 at 10:20 am and is filed under Art News, Go See. You can follow any responses to this entry through the RSS 2.0 feed. You can leave a response, or trackback from your own site.