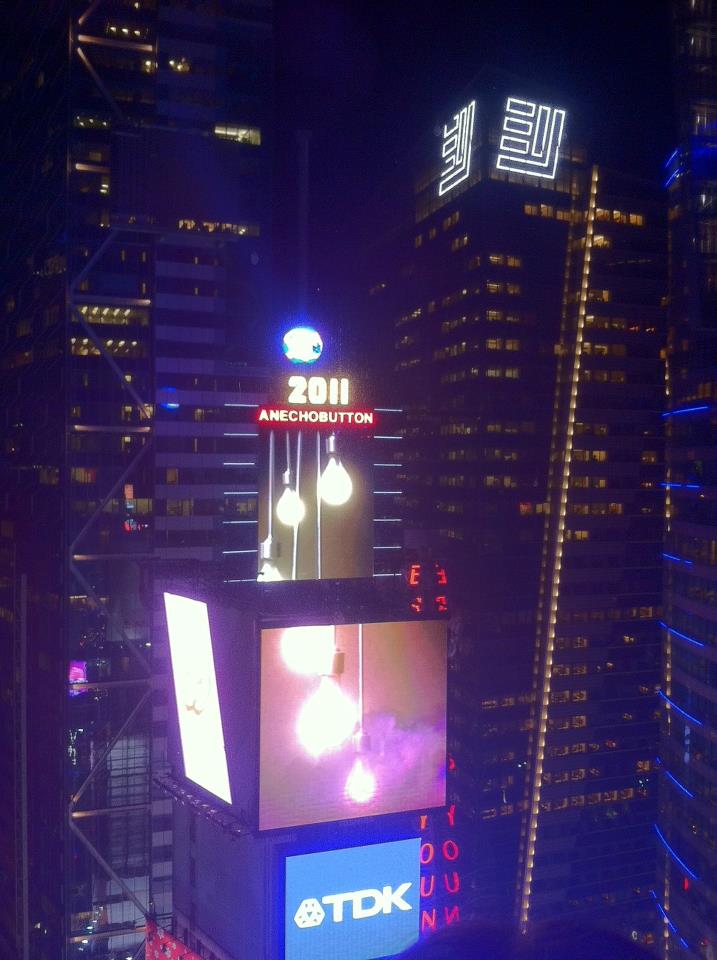 All images via Performa 11.

London-based artists Ed Atkins, Haroon Mirza, and James Richards mounted their sizable art installation, An Echo Button, in the thick of Times Square. Claiming the massive Toshiba screens as their canvas, the artists showcased a series of video pieces that actively responded to the setting in which they were in, projecting a nonstop, multisensory experience. The commercialism and history that constantly infuse Times Square are the main subject matter in the video clips. Simultaneously, the signboards outside function as an “echo chamber,” highlighting each artist’s zeal to display sound in varying contexts while taking advantage of the multiplying powers of the Toshiba screens. The site-specific work explores the crossroads of multimedia installation on a titanic scale. 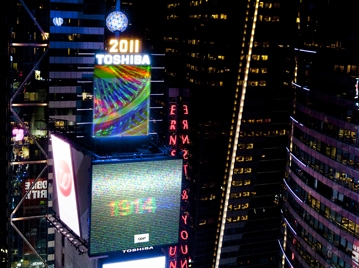 This is the first multimedia collaboration of this scale by the trio of emerging artists. All three artists came together for An Echo Button with varied specialties in the realm of visual and digital art. Ed Atkins focuses on high-definition drawing and writing to evoke a brand of surrealist corporeality that is only possible in a twenty-first century context. Major commissions include Art Now at Tate Britain and the Sculpture Center in New York. Haroon Mirza works primarily in fusing sound design and visual forms to create a cohesive discipline. Combining everyday objects and found items, he is able to create a graphic world for his original audio compositions. Major exhibitions include the Camden Arts Center and, in 2012, Spike Island in Bristol, UK. James Richards houses his artistic voice in the world of film: archiving, distorting, and remixing footage to create original art pieces. Known for mixing the highly personal with the predictably popular, he is able to give a singular voice to an otherwise generic series of visuals. Recent exhibitions include the Chisenhale Gallery in London. As a commission curated by Silvia Sgualdini for Performa 11, the ambitious work was co-presented by the Zabludowicz Collection.

This latter car-as-appliance group buys vehicles the way most of us buy refrigerators or light bulbs. If it works, they seem to last, and the price is reasonable — what more do you need?

The sad part is that the car-as-appliance folks could have their cake and eat it too. There are plenty of vehicles available that meet all the practical criteria but still have enough verve and style to satisfy the enthusiast.

Here are three. Let’s take them in alphabetical order.

2002 FORD SVT FOCUS: Ford’s Special Vehicle Team consists of a small group of designers and engineers who take existing Ford products and make them go faster, such as the SVT Lightning pickup, and the new 390-horsepower SVT Mustang Cobra.

But since the Ford Contour was discontinued, SVT had nothing available for less than $30,000. Enter the SVT Focus. It starts with the Focus ZX3 hatchback, adds steroids, and still brings it in for $17,995, with transportation.

And that’s with plenty of features, including a 170-horsepower 2.0-liter four-cylinder engine (the regular ZX3 has 130 horses), a six-speed manual transmission, anti-lock disc brakes, power accessories, air conditioning, a rear spoiler, a good stereo, a beefed-up suspension, and big P215/45ZR-17 radial tires on alloy wheels. There are only a few options, including a power sunroof for $595.

SVT engineers have done an amazing amount of work to get 170 horsepower from the 2.0-liter engine without using a supercharger or turbocharger. The 2.0-liter is still a little rough-running, but not objectionably so. Handling is crisp, despite the Focus’ relatively high center of gravity. For the money, the SVT Focus is a real bargain, and it still gets 25 mpg in the city, 34 mpg on the highway.

The interior is handsome and functional, and the sport seats are excellent. My only disappointment: The six-speed manual transmission felt notchy and unsure when going into gear, and wrestling it into reverse was a minor ordeal. I’ve driven another SVT Focus that had a better-feeling shifter, so hopefully the test car was not representative.

Still, for $18,000, I’m not complaining. Be aware too that next year, the four-door hatchback Focus, the ZX5, also gets an SVT version.

2002 HONDA CIVIC SI: When Honda redesigned the Civic for 2001, they dropped the sporty Si model, promising it would return. It did for 2002, but in an unexpected form: As a hatchback version otherwise unavailable in the U.S., built in a new Honda plant in England.

Under the hood, the Civic Si has a silky 2.0-liter, 160-horsepower four-cylinder engine, with five-speed manual transmission. Fuel mileage is 26 mpg in the city, 30 mpg on the highway. Price is a flat $19,000, plus $460 in shipping. There are no factory options, nor are any really needed: Standard stuff includes air conditioning, a power moon roof, cruise control, an AM/FM stereo with CD player, a rear spoiler, and anti-lock disc brakes.

The Si’s odd looks extend to the inside, where the gearshift sprouts out of the bottom of the dashboard, rather than from the floor. The shifter worked quite well, and controls and gauges were well-placed. The bucket seats were supportive but seemed to place you higher in the car than you’d expect, especially since the moon roof limited headroom slightly.

I like the Si, but not quite as much as I expected. It’s quick, and handling, with the firm suspension and P195/60VR-15 tires, is quite good. But the Si and I didn’t quite click. I’d kind of like to see an Si version of the Civic coupe, which is what the 2001 Civic Si was. see here 2002 honda civic

Still, Honda is having no trouble selling this Si. And the styling is growing on me.

2003 MINI COOPER S: It’s the undisputed darling of the small-car set, a vehicle that extends the trend begun by the Volkswagen New Beetle, and continued by the Chrysler PT Cruiser, to make small, inexpensive cars fashionable.

While you can get a Mini Cooper for well under $20,000, that version will have the 1.6-liter, 115-horsepower four-cylinder engine, which puts it at a disadvantage with the 170-horse SVT Focus, and 160-horse Civic Si. So the test car is the higher-performance, higher-priced Mini Cooper S, which has that same 1.6-liter engine, but uses a supercharger to up horsepower to a competitive 163, while still getting 24 mpg in the city, 33 mpg on the highway. The S is available only with a six-speed manual transmission. That’s fine, because this is one car I wouldn’t even consider with an automatic.

The stiffer suspension with the S and the gutsy engine make this one of the most amusing cars to drive there is, at any price. The driver is in touch with the road, but never overwhelmed by a too-stiff ride. The leather-trimmed seats on the test car were superb, and interior styling manages to be retro and utterly fresh.

The S starts at $19,300, and that includes a lot of equipment, such as air conditioning, a stereo with CD player, power accessories, anti-lock disc brakes, and side-curtain air bags. Options on the test car were the leather ($1,250), silver metallic paint ($400), cruise and audio controls on the steering wheel ($350), and a $1,250 sport package that added 17-inch tires, Xenon headlights, stability control and a few other features I’d want. With shipping, the price was $23,100. Erase the leather and steering wheel controls, and that price is $21,500 — assuming you can find a dealer that has one, and will sell it to you for that. Such is the demand.

While the Mini is my favorite, I could live happily with any of the three. Good things do come in small packages.

Steven Cole Smith is the Sentinel automotive editor. He can be reached at scsmith@orlandosentinel.com or 407-420-5699.

This entry was posted on Saturday, November 19th, 2011 at 7:03 pm and is filed under AO On Site, Events. You can follow any responses to this entry through the RSS 2.0 feed. You can leave a response, or trackback from your own site.