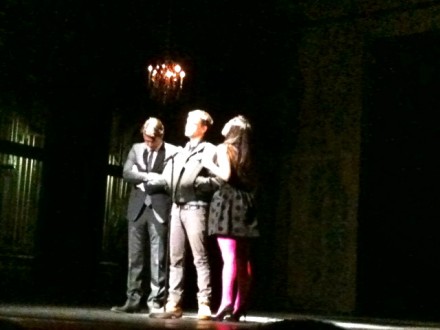 In a one-time only, Performa 11 new commission, James Franco and Laurel Nakadate presented Three Performances in Search of Tennessee at the Abrons Arts Center on November 13, 2011. A loose interpretation of Williams’ famed work, The Glass Menagerie, Franco and Nakadate acted as directors and judges for the series of performers that participated in the work. Both an experiment in performance and a tribute to the renowned playwright, the work was divided into three distinct sections. 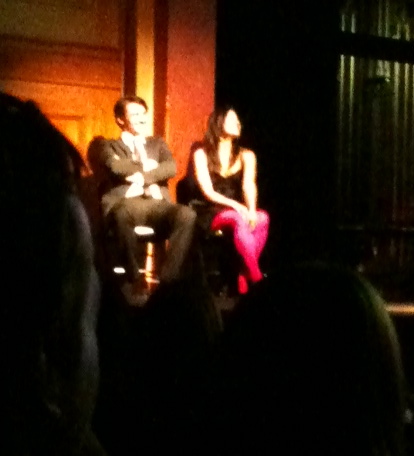 Franco and Nakadate look on, Three Performances in Search of Tennessee (2011)

In the first section, the audience and cast alike were invited to engage in a séance for Williams. Aptly titled Séance, the meditation offered a literal tribute to Williams while trying to find practical connections between his work and the artistic endeavors of Nakadate and Franco. The spiritual medium, Betsy Cohen, noted Williams’ draw to Franco and his acting talent; Nakadate wanted to know about the first time Williams’ had his heart broken; these opening movements fused together in a contemplative fashion to establish the reverential tone of the entire work. 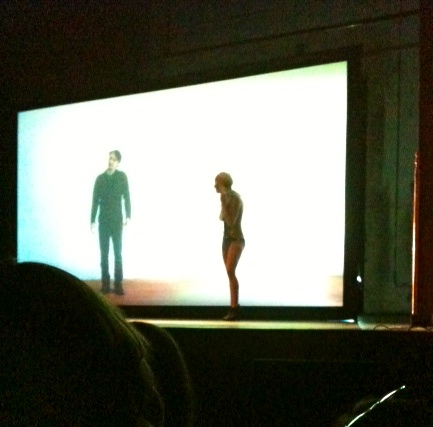 The second section, Women, brought a series of female performers to the stage (who, come to find out, answered a casting call on Craigslist in order to be a part of the performance) as one of the central scenes from The Glass Menagerie played on a large video screen in the background. Franco acted as the character of Jim, and each rotating female figure, entering and exiting at Nakadate’s direction, assumed the role of Laura as her lines flashed upon the screen. Sometimes unassuming, sometimes melodramatic, each female that entered the stage in the midst of this hyper-controlled theatre-karaoke, was unaware of her impromptu role in the performance (one woman even placed a candid cell phone call to her mother). Seated stage right for the entirety of the scene, Franco and Nakadate acted as directors for the inconspicuous performers. “Speak up,” “Face the audience,” and “Read your lines!” were among the exclamations they delivered as the various female performers struggled through the scenario—expected to respond, dance with, and even kiss the male lead through the video screen veil. As the scene concluded, Jim’s words seemed more apropos than ever: “Everyone excels at something… some people just excel at more things than others.” 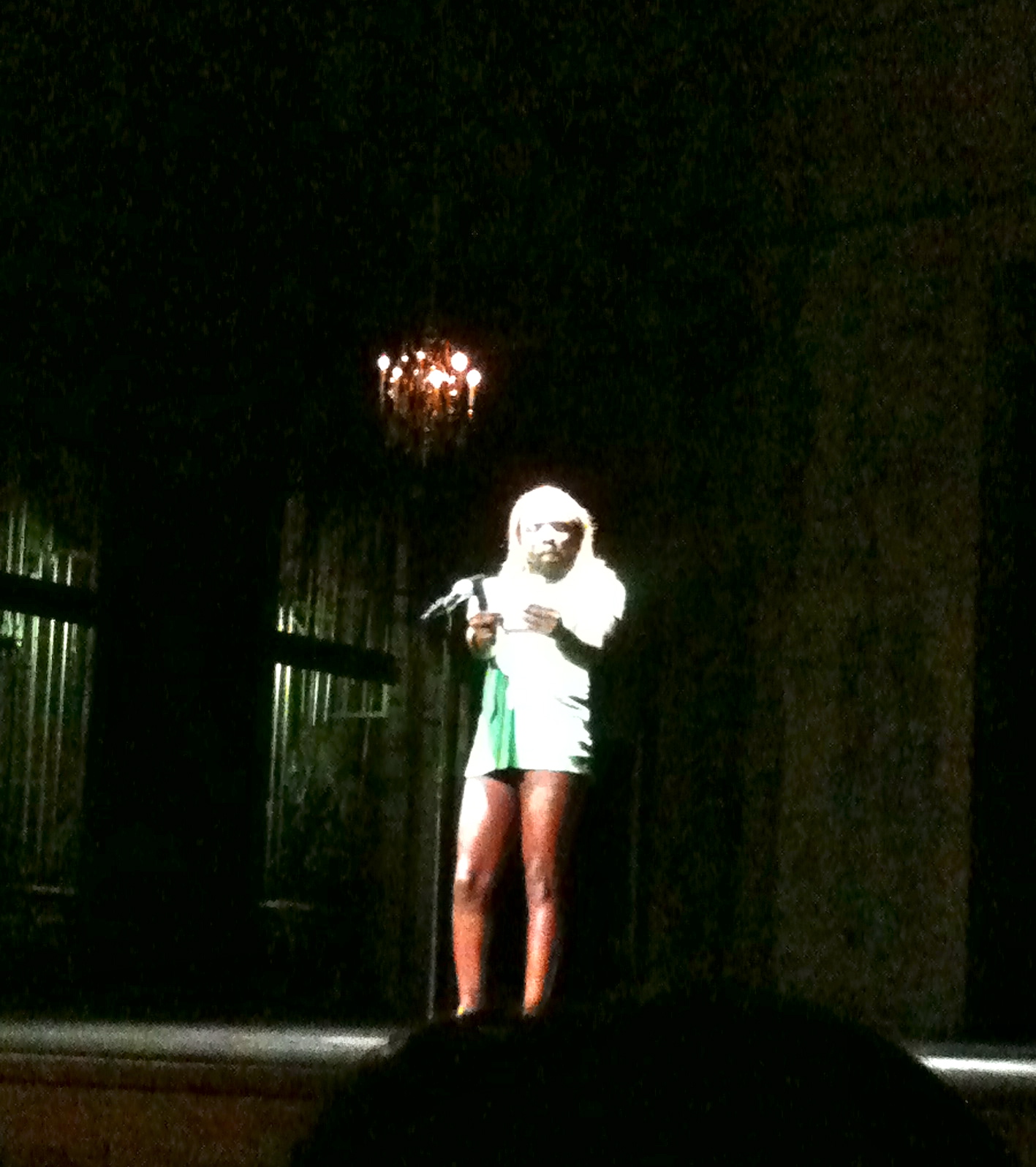 “Men” was the final section of the work, highlighting a handful of male performers reciting Tom’s evocative final monologue from The Glass Menagerie. Each actor took the stage with a different motivation—some nostalgic, some mocking, some stoic, artist Kalup Linzy in drag—every performance was somehow a product of the complex melancholy that concludes Williams’ play. In a theatrical power shift, Franco and Nakadate were no longer the directors, but served at the disposal of the male performers. This was most apparent with the third male performer, Ryan McNamara, who requested that Franco and Nakadate blow on his hair to create a wind-tunnel effect while creating what he referred to as “stoic tears,” produced by Franco spitting onto his face. 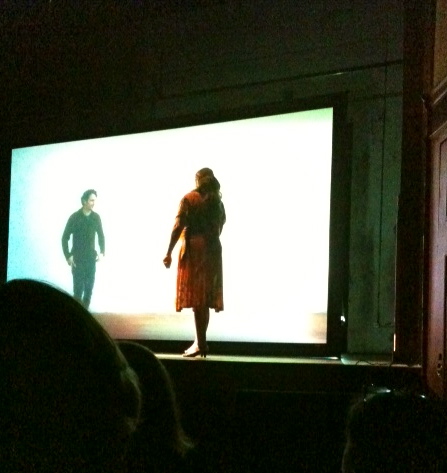 Laurel Nakadate is an accomplished photographer and video artist. Her work is in many public and private collections, including the Whitney Museum of American Art and the Museum of Modern Art. A mess of power struggle, loss, and betrayal, her photographic and video art usually displays the human form in unusual situations. Approaching social displays with an unadulterated audacity, she often includes strangers and the idea of strangers in her work. Nakadate’s first feature film, STAY THE SAME NEVER CHANGE, debuted at the Sundance Film Festival in 2009. Since then, she has been nominated for a Gotham Award and an Independent Spirit Award. She currently lives and works in New York City.

James Franco is an actor, director, writer, musician, and ubiquitous performance artist; as his artist bio states, “Franco carries on the Warholian marriage of celebrity and art.” Interested in addressing his audience through varying filmic mediums, he is best known for his roles in major motion pictures, including Pineapple Express, Milk, and 127 Hours. He has been nominated for a Screen Actors Guild Award, Academy Award, and garnered a Golden Globe Award for his portrayal of James Dean in the biographical TV movie. Major exhibitions include Gagosian Gallery (NYC), Peres Projects (Berlin), and the Los Angeles Museum of Contemporary Art.

This entry was posted on Monday, November 21st, 2011 at 11:54 pm and is filed under AO On Site, Art News, Events. You can follow any responses to this entry through the RSS 2.0 feed. You can leave a response, or trackback from your own site.

One Response to “AO On Site – New York as part of Performa 11: James Franco and Laurel Nakadate Present ‘Three Performances in Search of Tennessee’ at the Abrons Arts Center, November 13, 2011”