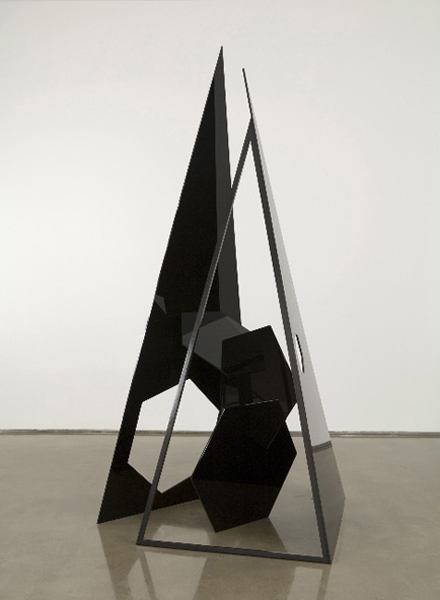 Eva Rothschild‘s latest exhibition is her second at 303 Gallery, titled The Heart of a Thousand Petalled Lotus. The main white room is peppered with matte black objects and looming sculptures, focusing on the form of the line and simplistic silhouettes of shape. Crudely structured objects are precisely wrapped and woven with red and white, while a series of totem pole-like columns huddle together. Also included in the show are brighter, more psychedelic paintings, a distinct difference from her sharply calm sculptures. 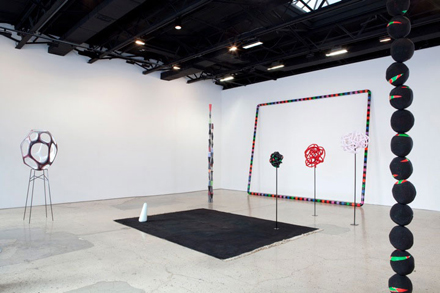 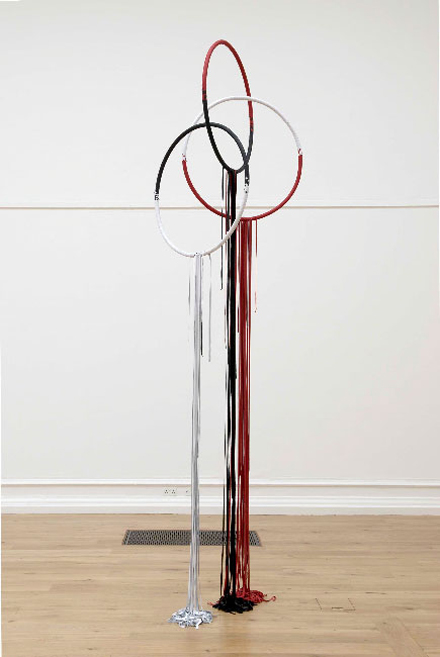 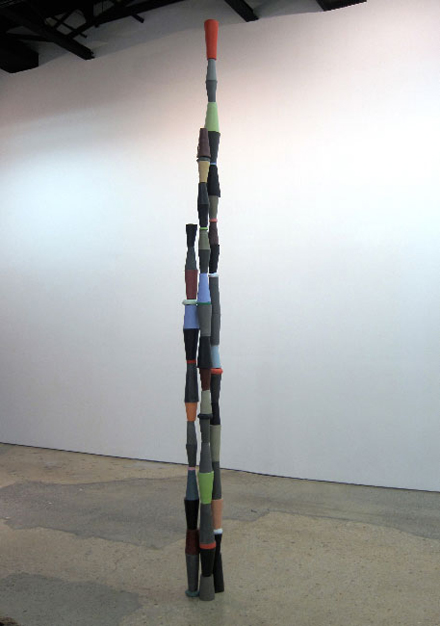 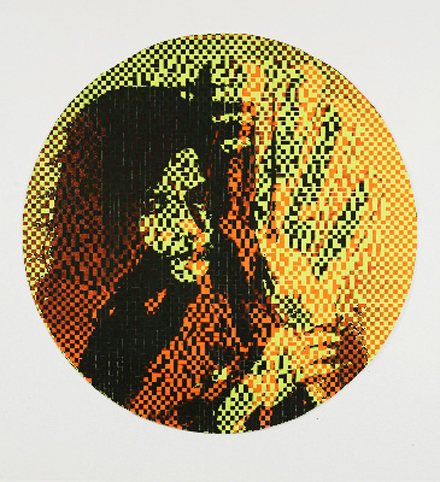 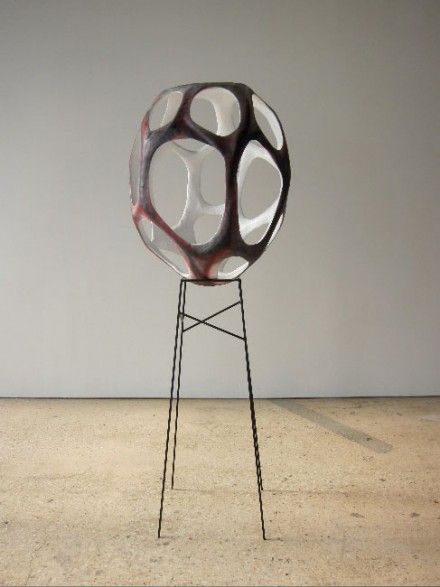 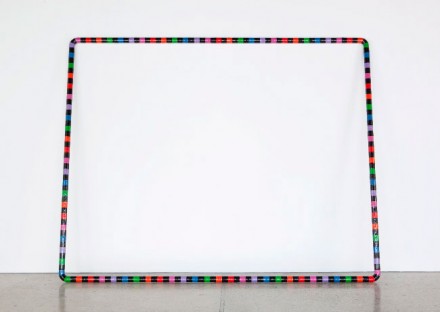 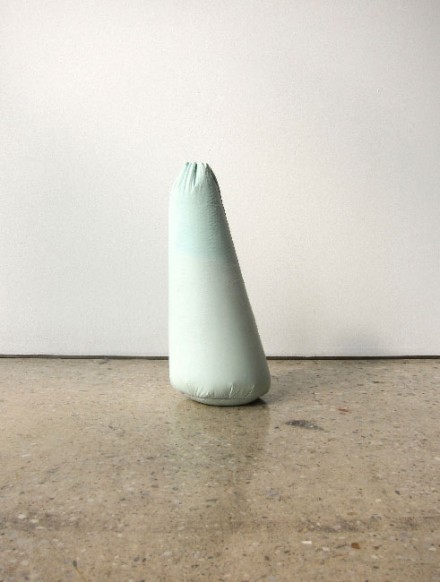 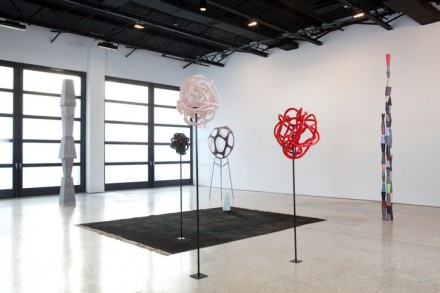 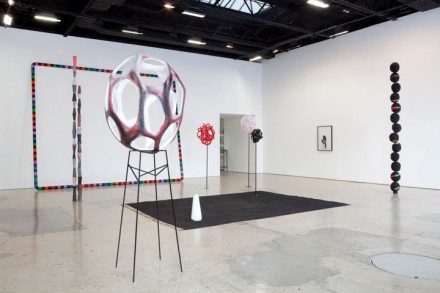 Mint January 4, 2012 India, Jan. 4 — There’s plenty of new technology to look forward to and plenty of amazing products and services to ogle at this Smartphones with flexible displays, wafer-thin laptops with all-day battery life, an increasing dependence on cloud services we list some of the biggest trends we’ll witness in the tech world.

1. It isn’t science fiction, it’s fact Did you always wish your laptop was a tad lighter, a bit faster, its battery lasting a few hours longer? The tech gods are surely smiling down on us, for there’s a new kid on the block that will fight tablets for all the tech headlines in 2012. Ultrabooks, essentially thin and light laptops with improved performance credentials, will go mainstream.

According to an Intel prediction, 40% of the notebook market will comprise ultrabooks by the end of 2012. If true, that’s just astonishing, as ultrabooks only started appearing late in 2011. For Intel to project such a figure means it has convinced all the major manufacturers to make ultrabooks.

We know Asus, Acer, Lenovo and Samsung have already launched their ultrabook offerings in the Indian market. We expect brands like Dell, Hewlett-Packard (HP), Sony, MSI, Fujitsu, Toshiba and others to launch their branded ultrabooks here soon too.

While most of the ultrabooks launched early this year will continue to sport Sandy Bridge CPUs, new hardware will take processing and computing to the next level. Devices running Intel’s 22nm upgrade of Sandy Bridge, codenamed Ivy Bridge, will finally start shipping towards the end of this year. The upcoming Ivy Bridge chips are faster overall by 20% and graphics output is higher by a whopping 30%.

Not just this, the next generation of Intel Atom chips dubbed Cedar Trail should start shipping early this year, boosting netbook performance. Equipped with Cedar Trail Atom chips, N2800 and N2600 netbooks launching this year will better handle 1,080p video, high-definition multimedia interface (HDMI) and DisplayPort out, and also an onboard graphics processing unit (GPU) with DirectX 10.1 support. AMD has its own few thin-and-light platform updates planned around the same time.

2. We see the silver lining What more could we look forward to? What would be innovative in this space? Well, in our daily use of technology, we have been witnessing the cloud. It’s just that we didn’t realize it.

BlackBerry Protect is the simplest example. All your data is securely backed up as per your schedule. In case you lose or change your BlackBerry device, all you need to do is register the device and your data is with you at the snap of your fingers.

Look at Personal Cloud Ubuntu Cloud One. If you move across systems at work and home, you still have access to your personal files! A free OS, with free backup. Isn’t that a good deal? Apple lets you back up your data on the cloud too.

Gladinet Cloud Desktop is an innovative concept where, depending on your usage scenario, you could either choose to use Gladinet’s Cloud storage space, or even Amazon’s S3, Microsoft’s SkyDrive, Box.net, your personal server with file transfer protocol (FTP) or several other platforms out there to maintain your data. Gladinet sits on top of these platforms and manages your files for you. web site blackberry protect login

3. It’s bound to happen. The writing’s on the wall…

Ever since Apple launched the iPhone back in 2007, the race was on, with competing manufacturers leaving no stone unturned to clone it. The way the mobile phone industry has exploded over the past five years, especially with the advent of smartphones, consumers have never been in a better position to buy just the smartphone they desire.

2011 also saw the first iPhone ever to sport a dual-core processor, the iPhone 4S, and companies such as Samsung, LG and HTC launched the very first dual-core smartphones of their fleets Samsung Galaxy SII, LG Optimus 2X and HTC Sensation, respectively. During the course of this year, we expect dual-core smartphones to be priced competitively, at affordable rates.

While it’s great to have dual-core phones all around, what about the apps to utilize all that processing power? By all indications, apps that exploit multiple cores and multiple threads will become more main stream.

Of course, the first quad-core (yes, you read that right, four cores!) smartphone is also slated for release later this year. It’s the HTC Edge, the first of its kind in the world. It will have four cores clocked at 1.5 GHz each; that’s quicker than any commercially available netbook in the market currently. This is possible because the HTC Edge will be based on Nvidia’s Tegra 3 chipset, the next big step in smartphone hardware in 2012. The HTC Edge and others in its mould, which are expected to crop up sooner rather than later, will also offer better-than-ever graphics for upcoming smartphones and devices sporting a hand-held form factor. go to website blackberry protect login

4. In a manner of speaking, tablet sales will hit the stratosphere In today’s day and age, tablets are easy to get, but they aren’t exactly cheap or inexpensive. Of course, the smartphone industry has eclipsed everything in the consumer electronics domain, and cast a huge shadow on other technology products. But with tablets being a natural extension of smartphones, expect a bombardment of more brands and models this year. This abundance of products, will eventually help bring down costs across the board.

This year is a good time to be a tablet enthusiast. Here’s why.

We all know how Apple launched the original iPad back in 2010. In many ways, it spurred the tablet industry to accelerate and grow. And just like netbooks, between 2007 and 2009, tablets have captured the popular imaginationand analysts expect the trend to reach new heights this year. Tablet sales eclipsed netbook sales for the first time in 2011, and the trend isn’t expected to reverse anytime soon.

The best tablets releasing this year will undoubtedly have quad-core processors, almost all of them based on Nvidia’s Tegra 3 chipset. Apart from improved performance, Tegra 3 offers some cool features, prime among them being its sensible use of battery lifeapart from four high-performance cores, the chip deploys a fifth low-performance core for non-intensive tasks which actually helps extend the tablet’s battery life. Among the first tablets to sport quad-core processors this year is the Asus Transformer Prime. The upcoming iPad 3’s A6 processor is expected to have four cores as well.

Windows 8 tablets are also scheduled for launch in the second half of 2012, and quite a few analysts are betting on Microsoft to give Apple’s iPad a run for its money. Expect Windows 8 tablets from vendors like Dell, Samsung, even Nokia, with the refreshing Metro UI and a new perspective on tablets (apart from Apple and Google). And never underestimate the wave of Android 4.0 or Ice Cream Sandwich tablets that will soon hit you. With so much variety and innovation expected, not to mention the improved hardware and performance credentials, tablets are all set to become more than just leisurely companions, or entertainment and media consumption devices.

5. The party begins with better hardware and cloud integration In many ways, 2011 was the year for social games on mobile devices. With the advent of Tegra 3 tablets and dual-core smartphone chipsets this year, look forward to game developers stepping up the experience a few notches. That’s right, more Infinity Blade-like games, with console and PClike graphics and a less casual, more immersive, richer gaming experience. Similarly, game-streaming services like OnLive and Gaikai will gain more traction as cellular broadband becomes faster, more affordWhat’s happening with spe cialized game consoles? Th Sony PlayStation Vit (launched in December) along with the Nintendo 3DS will spearhead the charge o fans with exclusive games an high-quality titles. Apart from the obvious successor to th ageing Xbox 360 console, i Microsoft working on a Vita competitor? If yes, we might see the first announcement of such a device later this year.

While social gaming won’t be as big as it was last year, its main proponent, Facebook, will ensure community gaming is alive and kicking. Changes to Facebook’s Open Graph will have a positive impact on social games, with Facebook users able to see in real time what games their friends are playing. This will ensure a more rewarding end-user experience.

6. Expect qualitative tweaks in display technology On mobile devices, the display is an essential part of the buying decision. How much pixel does it pack? Is it Super AMOLED? Gorilla Glass layer? There’s no end to customer nitpicking. This year will see the introduction of some new technology that will both amaze and excite the user’s perception of display screens.

Ever since Nokia showcased a prototype device last year, one of the most anticipated trends in mobile-phone screens has been the introduction of flexible displays. One report suggests the display is made of carbon nano tubes whose electrical properties change when they’re stretched, letting you zoom in and out. Nokia and Samsung will be among the first ones to launch a smartphone with flexible displays later this year.

Mobile phone displays will gravitate towards the 720p resolution, while we may see tablets hitting the 1,080p resolution mark, and some even exceeding it. E-paper display, primarily driven by e-book readers, will become a $1.03 billion (around Rs5,479.6 crore) market this year, and apart from electrophoretic displays (the current standard for e-ink displays like the Kindle), Fujitsu’s cholesteric LCD displays with colour might also make a debut. E-paper displays with colour could make e-ink technology far more useful than it currently is, and could add a huge amount of d battery life to devices.

Published by HT Syndication with permission from MINT.

For any query with respect to this article or any other content requirement, please contact Editor at htsyndication@hindustantimes.com

This entry was posted on Wednesday, December 21st, 2011 at 12:31 am and is filed under Art News, Go See. You can follow any responses to this entry through the RSS 2.0 feed. You can leave a response, or trackback from your own site.