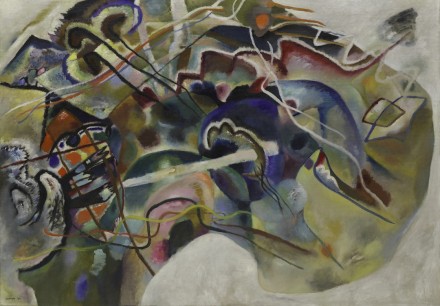 Several rooms at The Guggenheim are devoted to Vasily Kandinsky’s works this season. The artist’s personal renaissance—an abandoned legal career, a relocation from Moscow to Munich—yielded iterations of nascent abstractionism that in turn contributed to a rebirth for the artistic community, cementing his place among the eminent artists and thinkers of the early 20th century. 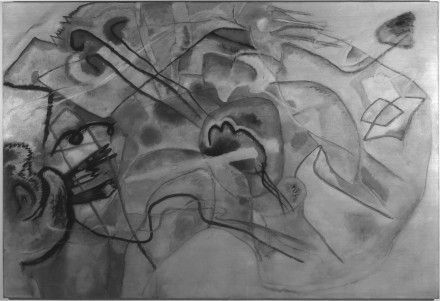 The substratum of the work above, as revealed by infrared reflectogram

Painting with White Border (Bild hit weissem Ran) (1913) is one strong example of Kandinsky’s geometric abstraction. This richly textured, mercurial work, produced during one of the artist’s intermittent stays in Munich, is a consolidation of Kandinsky’s practical and theoretical aesthetic concept.

Kandinsky regarded the canvas art of his impressionist contemporaries as a highly controlled affair. He intuited that the intensive preparation and revision processes involved with their production alienated the work and the audience from the artist’s encounter with the sublime. In Kandinsky’s mind, this cumbersome techne resulted in a dilute and bridled expression of beauty. 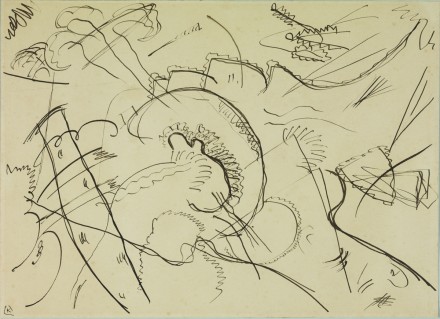 One of several preparatory sketches produced for Painting With White Border

Kandinsky aspired to cede conscious control over the creative process. A great admirer of music, he borrowed liberally, seeking to adopt such spontaneity and immediacy. He often improvised portions of his works, hoping to share the seminal moment of creation with his audience, and drew inspiration from live musical performance, enthused by its transiency and aleatory bent. Kandinsky desired that his art, like music, serve at once as subject and medium.

That is not to say, however, that Painting with White Border is not an arduously conceived piece. Microscopy suggests that there are layers upon layers of studies present on the canvas and, as the Guggenheim notes, some scholars staunchly maintain the presence of a lance-wielding St. George (astride a horse, no less) among the painting’s shadows. This is, after all, one of Kandinsky’s first abstract productions and he admittedly sought to ease the viewer in with some semblance of structure.

Yet ultimately, Kandinsky angles to serve not as conduit, but creator. His philosophy is reified among the swirling phantasmagoria of color and dancing geometric figures. Suggestive of a moment of great energy, there pervades a palpable sense of movement and vitality in this piece. 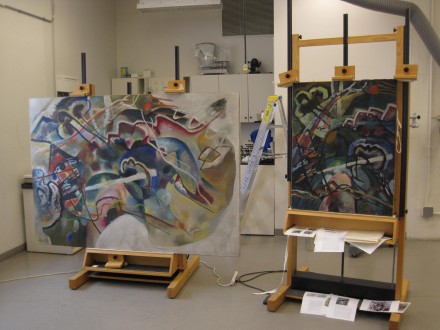 A preliminary sketch (right), alongside the completed work 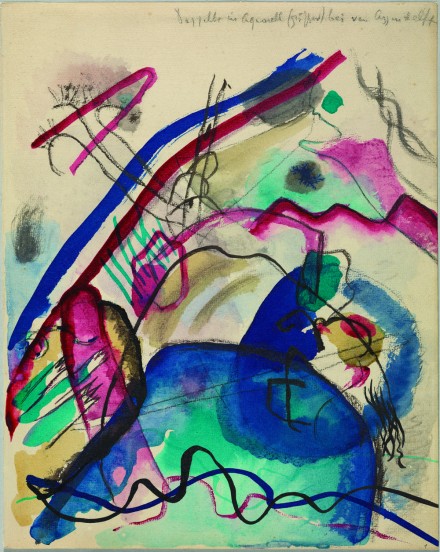 A watercolor study for Painting with White Border

Figures appear discrete upon a cursory glance only to merge with new forms in the next, while carefully crafted vanishing points and contours contribute to a sense of perpetual, inward motion. Some figures glide across the canvas, others dart in and out; some appear perpetually affixed, while others seem to have been caught gallivanting about. And there is of course the white border; as the Guggenheim writes of its inclusion, “By enveloping the composition in a soft white border, Kandinsky significantly altered the overall feeling of the painting… the painting began to soar.” 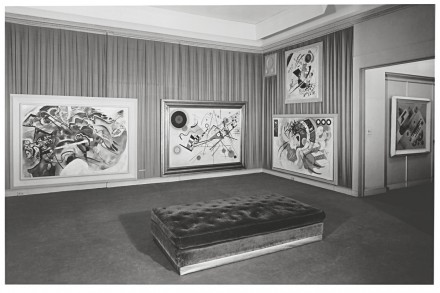 Installation view from the Museum of Non-Objective Painting, New York, 1950 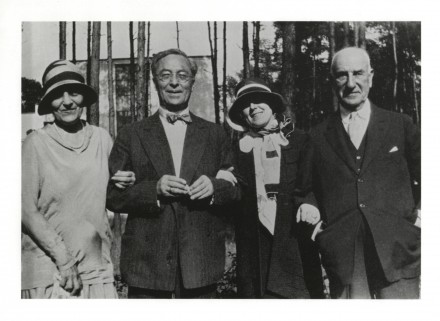 Painting with White Border is a piece of insistent reconstruction and reinterpretation. Kandinsky attempts to defy the confines of canvas with a desired fluidity in this singular work.

This entry was posted on Saturday, December 24th, 2011 at 11:00 am and is filed under Art News. You can follow any responses to this entry through the RSS 2.0 feed. You can leave a response, or trackback from your own site.