Polish-born artist Piotr Uklański is currently showing Midsummer Night’s Dream on the Caribbean island of St. Barthélemy, a Gagosian Gallery exhibition hosted by the Eden Rock Gallery. The opening reception took place over the holidays on December 29th, though the work has been on view since December 21st, and is up through January 31st. Art Observed was on site to visit the exhibition, which is positioned in likely the most iconic hotel on the island, the Eden Rock. St. Barths swells with international travelers from around the world through the New Year’s holiday and boasts likely the largest collection of mega-yachts on the planet during this time, as such, this pop up exhibition of Uklański works in this location was well timed and positioned by Gagosian Gallery. Uklański works in a variety of mediums, including sculpture, photography, performance, and film, directing and producing his first feature-length in 2006. Midsummer Night’s Dream showcases the artist’s new ‘pottery paintings,’ three-dimensional compositions of assorted ceramics, paying homage to various themes and artists of post-war Poland, as well as his grandmother. “My grandmother did hard labor in a ceramic factory in Communist Poland. This St Barths exhibition would be her Midsummer Night’s Dream,” Uklański states in the press release. 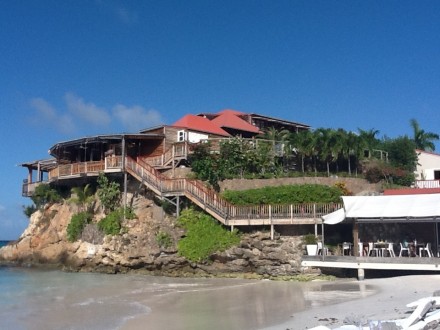 The ceramics with which Uklański ‘paints’ range several styles and designs, some simply mass-produced, others iconic Modernist works, some even signed by their artists. The geometric forms of the mosaics reference the Suprematist compositions of El Lissitzky and Malevich, extending to the overall installation design with direction from El Lissitzky’s “Raum Konstruktive Kunst (Room for Constructivist Art)” and “Abstraktes Kabinett” (1926).

Born in Warsaw in 1968, Uklański has been working with ceramics since 1999. His first commission covered three exterior walls of a department store in Warsaw, later creating a 30-meter long installation at the 2004 Kunsthalle Basel. The artist participated in the 2010 Whitney Biennial among several other major exhibitions, and his work has been both controversial and praised.

The Washington Times (Washington, DC) March 23, 2003 Byline: Alexandra Rockey Fleming, THE WASHINGTON TIMES Boston College junior Jeff Capotosto needed a break from the daily grind. Like most students, he hit the road, hoping to put some miles between himself and the stress and responsibility that riddle higher education. Mr. Capotosto’s spring break – unlike those of many of his peers – didn’t include any tequila shots, no honeycomb of revelers crashing cheap motels, no random hookups with unknown coeds. He traveled to Washington instead – on his own dime. Here the 21-year-old and his compatriots spent a week laying insulation and posting drywall on a couple of houses in projects supervised by D.C. Habitat, an affiliate of Habit for Humanity International, the Christian nonprofit housing organization based in Americus, Ga.

Nearly 30,000 students nationwide will participate in some type of alternative spring break this year, says Dan McCabe, executive director of Break Away, a national nonprofit group that assists colleges and communities in promoting alternative break programs. Organizers say this type of trip appeals to students who want to make new friends, help other people, learn about different cultures and experience a new environment – minus the bacchanal more frequently associated with spring break.

Before his trip, Mr. Capotosto said he was confident that his vacation, organized through Boston College’s service group, Appalachian Volunteers, would be a great opportunity – “everyone coming together for a cause,” he says.

“A lot of times you’re worried about your own life,” he says. “This is a week where you can actually do something for someone else. It’s a nice thing to do that’s also rewarding for everyone involved.” +++++ Concerns The three B’s booze, beaches and bikinis commonly are linked to spring break in the minds of many students. Some considerations for parents of teens who are planning spring-break vacations include: website alcohol poisoning symptoms

* Many “all-inclusive trips” to foreign destinations such as the Caribbean, Mexico and Canada include all-you-can-drink parties, booze cruises, unlimited open bar and parties sponsored by liquor distributors where alcohol is distributed free of charge.

* The drinking age is 18 or 19 in Mexico, Canada and much of the Caribbean, and in many of these places the age limits are only modestly enforced, if at all.

* U.S. citizens are subject to the laws of the country they are visiting. If a teen is arrested, there is little if anything that the State Department can do to help. Also, medical care in many resort areas often is inadequate to respond to drinking and other substance-related crises.

* Although some travel companies provide adult chaperones, these adults are not responsible for monitoring students’ alcohol or drug consumption or sexual activity. website alcohol poisoning symptoms

* Many young people don’t know the signs of alcohol poisoning. Symptoms include the following: The person doesn’t respond when spoken to, pinched or poked; the person vomits when passed out; the person cannot stand up or remain standing without aid; the person has a very slow rate of breathing fewer than six breaths per minute; he has bluish or purplish or clammy skin that feels cool to the touch; his pulse is slower than 40 beats per minute.

Source: Students Against Destructive Decisions +++++ More info Books * “The Uncollege Alternative: Your Guide to Incredible Careers and Amazing Adventures Outside College,” by Danielle Wood, ReganBooks, 2000. This book includes ideas and resources on opportunities for adventures around the world; internships, apprenticeships and training programs; and community service projects.

* “Don’t Tell Me What to Do, Just Send Money: The Essential Parenting Guide to the College Years,” by Helen E. Johnson and Christine Schelhas-Miller, Griffin Trade, 2000. Using case examples and real-life dialogue, this book shows how parents may have lost control over their college student, but they haven’t lost influence.

Online * SADD, Students Against Destructive Decisions, (www.sadd-online.com) has identified spring break as a time of year when teens are particularly at risk. Its Safe Spring Break Campaign offers a safety kit that includes materials that warn young people about some of the dangers of underage drinking. SADD also encourages young people to turn their energies to community-service projects that will strengthen and improve their communities. The Spring Break Safety Kit includes ideas and information about community-service projects that teens can organize that will provide opportunities for teens to get together, have fun and accomplish a worthwhile objective over spring break.

* Break Away (www.alternativebreaks.org), a national nonprofit organization, provides workshops and facilitates a network to connect nonprofit groups that need volunteers with the goal of having students become lifelong participants in community service.

* Youth Service America (www.ysa.org) is a resource center and alliance of more than 300 organizations committed to increasing the quantity and quality of opportunities for young Americans to serve locally, nationally or globally.

Boston College junior Jeff Capotosto helps repair the house for D.C. Habitat, an affiliate of the nonprofit organization. “This is a week where you can actually do something for someone else,” he says. “It’s a nice thing to do that’s also rewarding for everyone involved.” [Photo by Jessica Tefft/The Washington Times] Boston College students and AmeriCorps workers put siding on a Habitat for Humanity house in a Northeast community in the District. Nearly 30,000 students nationwide will participate in some type of alternative spring break this year, says an official of a nonprofit group. [Photo by Jessica Tefft/The Washington Times] Natalie Battle, a junior at George Mason University, traded sand, sun and relaxation for an alternative break in New York City. There she spent a week caring for victims of HIV/AIDS via the Gay Men’s Health Crisis, an AIDS advocacy and education organization. [Photo by Jessica Tefft/The Washington Times]

This entry was posted on Tuesday, January 3rd, 2012 at 10:32 am and is filed under Art News, Go See. You can follow any responses to this entry through the RSS 2.0 feed. You can leave a response, or trackback from your own site.