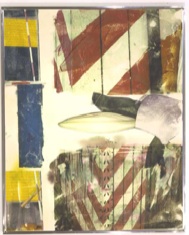 ‬The Robert Rauschenberg Foundation donates ‘Early Bloomer [Anagram (a Pun)]’ to the White House be placed in the family dining room, the fourth contemporary work within the White House Collection amongst two works by Joseph Albers and one by Georgia O’Keeffe [AO Newslink]

Read article via The Art Newspaper

Dangerous on the dance floor.(Time Out!)

Daily Herald (Arlington Heights, IL) October 23, 2008 | Pizek, By Jeff Byline: Jeff Pizek Daily Herald Music Writer jpizek@dailyherald.com Rock and dance music can make uncomfortable bedfellows. However, in recent years, weve seen more artists attempting to mate the disparate disciplines than perhaps ever before. If they all handled the balancing act with The Glides cosmopolitan poise, we could have a revolution on our hands.

Based in Chicago, The Glide melds post-punk gloom and electronic propulsion, a modern take on the kind of man/machine summit that once drove groups like Depeche Mode and New Order to the top of both dance and pop charts. They released their debut EP, “Ceremony,” as a free download this week. web site act question of the day

“Ceremony” sounds mature coming from a band thats been around less than a year, but these guys have familiarity on their side. Four of the members (all but guitarist Hector Segura) have played together since attending Glenbard East High School in Lombard, including in defunct new wave-influenced “party rock” act Question Mark Zero.

Keyboardist Jason Little, a professional photographer who handles the bands visual aspect, says earlier Glide music was more comparable to that of indie stars like Interpol, Radiohead and The Arcade Fire.

“We would play shows with this kind of shoegaze, progressive rock music,” Little recalls, “and people would just stare at us. Nobody would move, people would just watch. We wanted to see people dancing and having fun.” The answer, a gleaming electro edge, evolved thanks to vocalist Darius Lafkas, whose solo experiments inspired the rest of the band to refocus their sound this past spring.

“I always liked electronic music,” admits Lafkas, “but I could never really achieve what I was going for until recently. As far as what I was going for, it was just bits and pieces of what I pick up when I listen to music.” Lafkas cites English legends Underworld as a personal favorite, while Little names electronic acts such as Daft Punk, The Faint and The Presets as reference points for the entire band. site act question of the day

“I write a lot about girls, but I try to not make it obvious,” says Lafkas of his lyrics. The romantic focus is indeed clear when he sings about being “so helpless in your hands” (“Future”) or that “long goodbyes are choking me to death” (“Romance 84″), while the caustic “Backstabber” is surely directed at someones ex. Overall, though, the words reflect ambiguous anxiety, such as the dramatic “Do you believe this will get better?” refrain of the lower-key “Pluto.” Then theres “Nothing to Hide,” which begins with Lafkas mournful singing over a mere guitar and doesnt contain a hint of dance beats until the halfway mark. One might guess this is an older track from when The Glide was more of a straight-up rock band, but its not.

“Honestly, when I write things, whatever happens happens,” says Lafkas of the track. “The beginning does sound more like what I would have written in the past. I was about to make it into something dancy, but it just sounded right like that.” As Little notes, the quieter, organic segment of “Nothing” provides a necessary “emotional break.” “A lot of our songs are fast, really high energy,” says Little. “We dont want to beat the living hell out of a listener. Ive always had problems with listening to bands that have a nine-song album and every single song is 150 beats per minute. You can only listen to so much and then you have to turn it off.” While the bands not quite “industrial,” Lafkas and Little admit being fans of black-swathed electro-rockers such as Nine Inch Nails and Imperative Reaction. While not quite “goth,” either, theres definitely a dark, nocturnal edge to the melodies The Glide puts forth on “Ceremony.” “Ive always wondered if I would ever hear a lighter pop song coming out of what Darius wrote, and it hasnt happened yet,” says Little as the two giggle. Lafkas adds: “Theres something cheesy about being happy, know what I mean?” Despite this, Little points to their whimsical promo photos as evidence that aside from their nervous technological thumpers, The Glide has a sense of humor.

“We see a lot of bands, especially indie bands, and it can be hard to take people seriously when everybodys so stern,” the keyboardist says. “We want to have more of a fun, inviting edge. Were very visual when we play live. We want to visually entice people so theyll want to come see us.” As for giving away “Ceremony” for free, it serves two purposes. One is that fans can now have definitive versions of seven older songs, since The Glide is already working on new material for a full-length album. The other is that it makes promotion easier.

“We go to a lot of shows and we see a lot of mediocre bands selling CDs for $10 a pop,” says Little. “Nobody wants to buy them. We thought that was wrong. Youre an unknown artist, youre not on the radio or TV … Im not saying you have to be to sell records, but wed rather people spend money on coming to shows, having a good time, getting a few drinks or buying a T-shirt. Were more interested in getting our music into the hands of those people than getting $5 for a couple of songs.” theglidemusic.com myspace.com/theglidemusic Pizek, By Jeff

This entry was posted on Wednesday, March 28th, 2012 at 12:06 pm and is filed under Art News. You can follow any responses to this entry through the RSS 2.0 feed. You can leave a response, or trackback from your own site.