AO on Site – Stockholm: Sturtevant ‘Image over Image’ at Moderna Museet through August 26, 2012 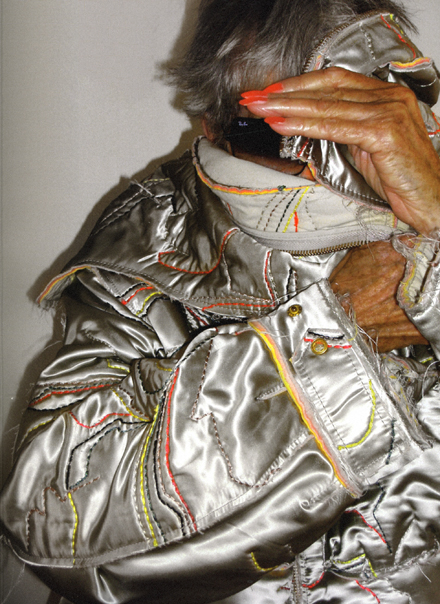 Sturtevant. Photo by Loren Muzzey. All images courtesy the artist and Moderna Museet unless otherwise noted.

For half a century, Sturtevant has built her practice on the citation of other artists’ works. Challenging authorship through acts of appropriation long before it was made popular by the likes of Sherrie Levine and Richard Prince, Sturtevant made her artistic debut in 1965, when she presented a roomful of Warhol silkscreen flowers at a gallery mere months after the originals had been created. Although largely overlooked until recent years, Sturtevant won a Golden Lion for Lifetime Achievement at last year’s Venice Biennale. Her latest exhibition, Image over Image, opened March 17th at Moderna Museet in Stockholm. Showcasing 30 works, 4 of which are the artist’s “originals,” the exhibition fosters a sort of wall label guessing-game. As visitors travel from room to room they are confronted with familiar works from modernist art history—a Jasper Johns here, a Duchamp there. Among other artists cited in this exhibition are Joseph Beuys, Keith Haring, Félix González-Torres, John Waters, and Paul McCarthy. 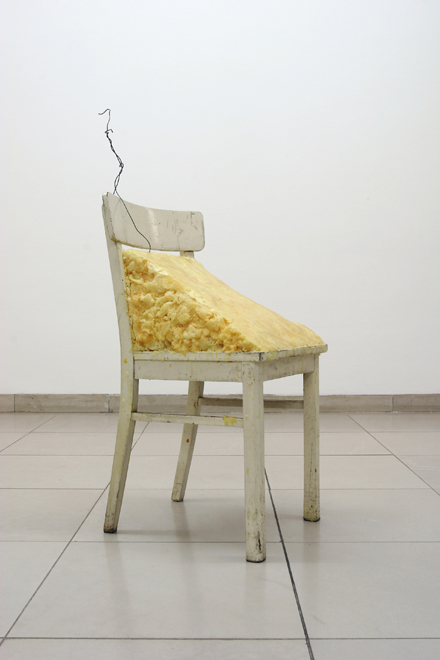 Since 2000, Sturtevant’s interest in mass media culture has pushed her into working with video art, a medium which serves to recontextualize her canonical practice. Working with appropriation in our contemporary remix culture, the artist comments, “What is currently compelling is our pervasive cybernetic mode, which plunks copyright into mythology, makes origins a romantic notion, and pushes creativity outside the self. Remake, reuse, reassemble, recombine—that’s the way to go.” 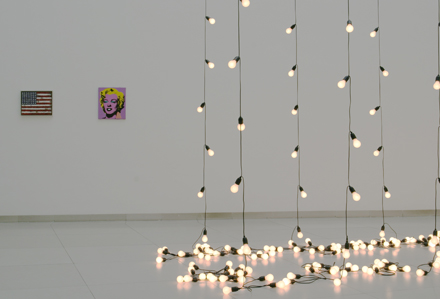 The exhibition begins in the foyer, where the viewer is treated to a wander through Félix González-Torres’ Untitled (America) (2004). Leaving the soothing glow of the lightbulbs, visitors are confronted with an original work, Elastic Tango (2010). Constructed from nine stacked video monitors, the imagery is part original, part citation from other video works—one recognizes, for instance, a Paul McCarthy work she later replicates in full in Dark Threat of Absence Fragmented and Sliced (2003). With imagery of chihuahaus, pink lipstick and tango dancers, Elastic Tango is boisterous, lively, and overtly feminine. In Artforum, Claire Bishop called the work a “bombastic nine-monitor, three-act video assault.” When it was shown in the 2010 exhibition “The Razzle Dazzle of Thinking” at the Musée d’Art Moderne, the artist told Artforum, in a separate article from above, “It’s intrusive, big, and visual. The monitors are shaped in an inverted pyramid and the videos are devised as a three-act play in a very formal sense: presentation of problem, escalation of conflict, and then resolution without narrative. The resolution is, obviously, simulacrum.” 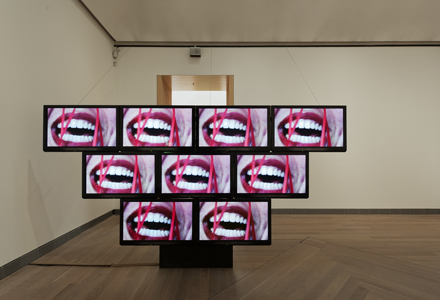 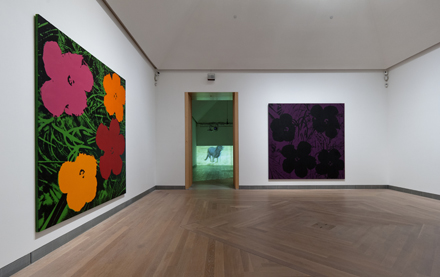 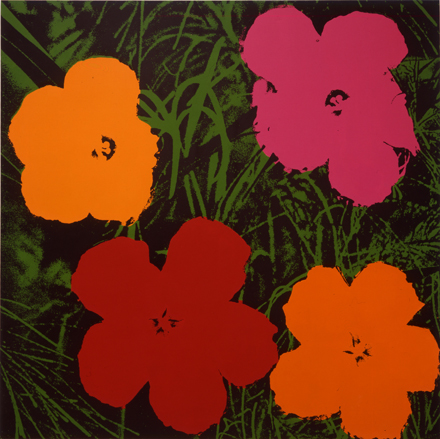 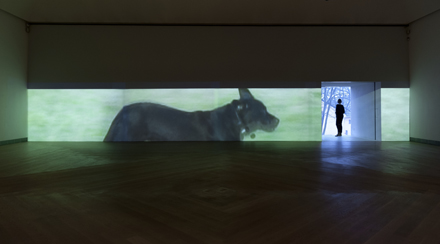 Continuing, the viewer enters a room of five large scale Andy Warhol flower silkscreens. An intriguing sight line is created to the large scale video projection in the next room featuring a black lab running full speed across a field. The video spans the entire length of the wall, including a window recess: its aggressive installation mirrors the artist’s rebellion. Three “fat chairs” by Beuys are arranged as though they, too, are taking in the film. The materials in some replicas prompt the visitor perhaps consider for the first time what level of craftsmanship is entailed in their creation. Sturtevant protests the use of the word “copies” to describe her work, instead preferring the more well-intentioned “rehearsals.” 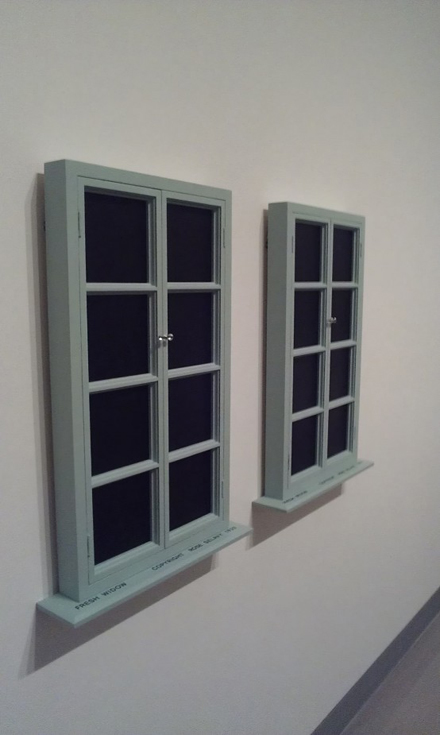 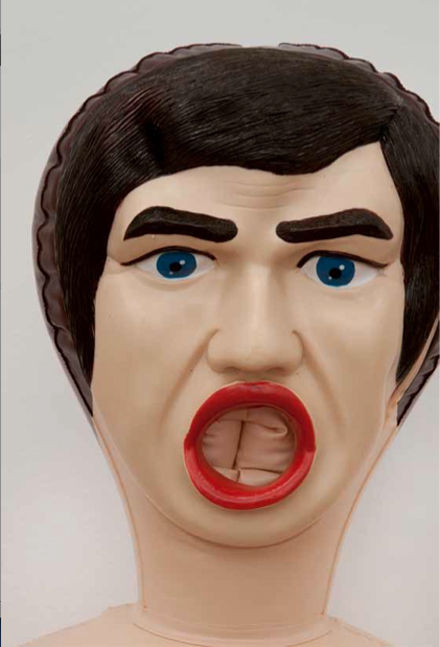 Further into the exhibition is an intimate gallery full of Duchamp’s windows, Fresh Widow. Sturtevant’s versions are mounted side-by-side with an original in Moderna Museet’s collection, which, befitting the exhibition’s theme, is actually a copy made by art critic and museum director Ulf Linde in 1963 but signed by Duchamp in 1964. Sturtevant’s rehearsal of a Jasper Johns is also present, and in another room, a Pac Man video plays on a flatscreen TV surrounded by Haring tags, and against one wall, a provocative line up of sex dolls. 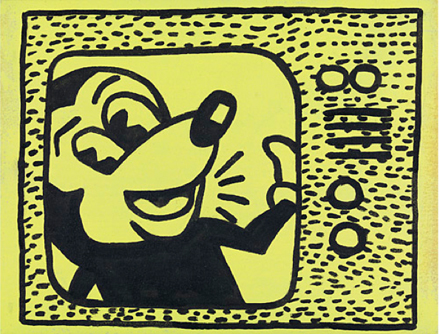 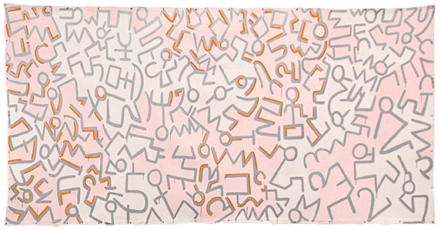 Born 1930 in Lakewood, Ohio, Elaine Sturtevant was never formally trained as an artist. In an interview with Sweden’s newspaper Dagens Nyheter (DN), she explains that she never uses photographs to aid her process. “I have only ever made replicas of works I have seen in real life, and I paint from memory. It’s more about the work’s original force than it is about their exact likeness.” 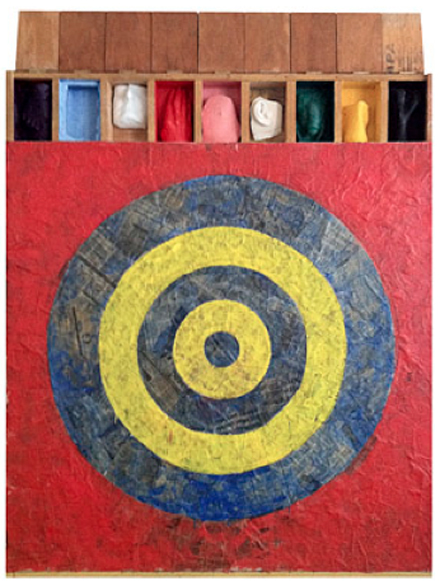 The artists Sturtevant mirrors have varying opinions on being replicated. Some have been angered while others have shown apathy. Sturtevant factors heavily into the history of a Rauschenberg work Short Circuit acquired last year by the Art Institute of Chicago. As Carol Vogel relates, Rauschenberg was asked to curate an exhibition at the Stable Gallery in Manhattan in 1965. When all four of his suggested artists were vetoed he decided to make his own work that incorporated the others. A sort of cabinet with two hinged doors, Rauschenberg “hung” works by Jasper Johns and Susan Weil behind the doors. When the Johns painting was stolen from behind the door some time later, he asked Elaine Sturtevant to paint him another.

Rauschenberg wasn’t the only artist who understood Sturtevant’s practice. When asked how he made his serigraphs, Warhol famously replied, “I don’t know, ask Elaine.” These anecdote makes the setting for the exhibition quite fitting—Moderna Museet was the first ever to give a retrospective to Warhol, in 1968. To augment this exhibition, the museum reproduced a number of the artist’s Brillo boxes, which later turned up on the second-hand auction market. In this way, the exhibition press release suggests, the museum’s history of confronting authenticity makes Sturtevant’s exhibition “nearly site-specfic.” 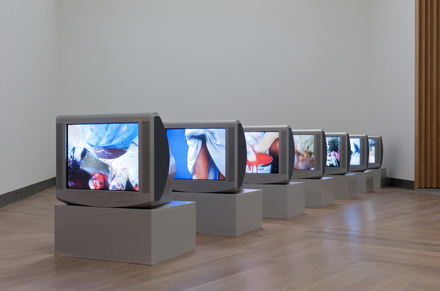 Dismayed by lack of support from artists and critics, Sturtevant took a break from the art world in the 1970s and 80s. When asked what she did during that period, she told DN, “I wrote a lot, and played tennis. But in my mind I was like a red-hot iron.” When the art world began catching up to speed on appropriation in the 1980s, Sturtevant rejoined the match. 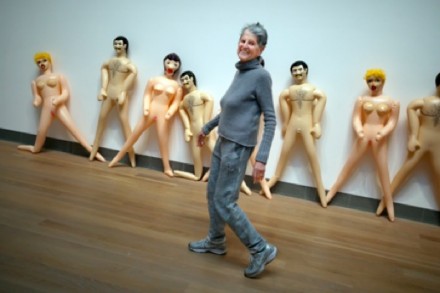 The artist during the preview of Image over Image. Photo courtesy Dagens Nyheter.

A spritely 82, Sturtevant ran around the exhibition’s press preview in sporty clothes and sneakers. During the opening she could hardly contain her energy, raising her arms and shouting about cybernetics. Her energy ran all the way through the symposium at the museum the next day, titled “Beyond Cynicism: Political Forums of Opposition, Protest, and Provocation in Art.” Image Over Image is curated by Frederik Liew and runs through August 26th. It is produced in collaboration with Kunsthalle Zurich, where it will travel in the fall. Semiotext(e) is planning a monograph on the artist’s work, to be released in 2013.

This entry was posted on Tuesday, April 10th, 2012 at 12:20 am and is filed under Go See. You can follow any responses to this entry through the RSS 2.0 feed. You can leave a response, or trackback from your own site.