AO On Site: “Friends with Benefits” at Lehmann Maupin through August 10, 2012 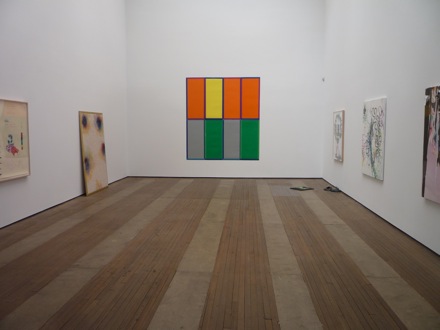 “Friends with Benefits,” Lehmann Maupin‘s summer group show on view at their location at 201 Chrystie Street, is a correspondence between generations that reveals the concerns of each. The gallery asked five of their artists–Tony Oursler, Angel Otero, Tim Rollins, Mickalene Thomas, and Nari Ward–to ­­request work from young artists they would like to support. Curated by Carla Camacho and Drew Moody, the result is an appealing disjunction of artistic histories, showing contemporary artists engaged with the concerns of a former generation while also reflecting on the artistic currents of their own time. The exhibition’s starting point, as described in the press release, is the notion of “the gallery community as a fertile space,” which takes a positive stance on the white cube as a place where older artists can encourage the work of younger artists. 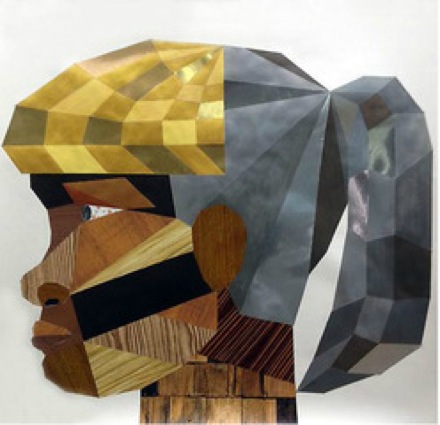 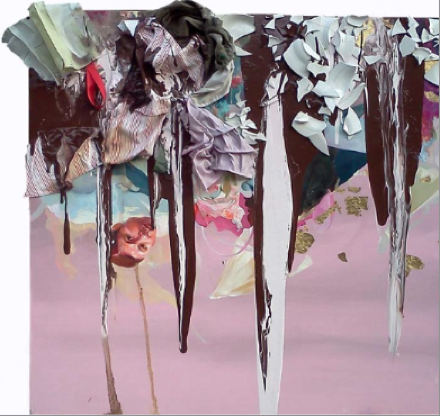 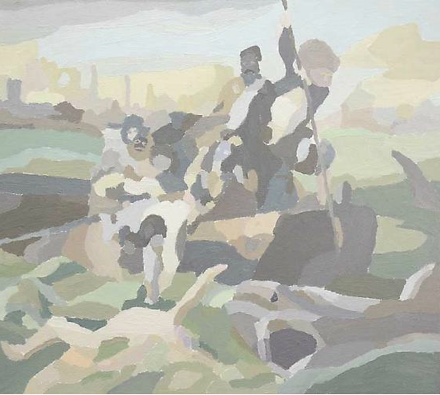 Perhaps because of this open-armed embrace of a gallery system that is perhaps less fecund than imagined, the artworks included often utilize older forms, while still relaying contemporary concerns. Thus, collage and painting are both well represented in the exhibition, and in particular dominate the first floor of the gallery. Derrick Adams‘s HEADS #13 (floor plan) depicts a collaged and primitivized head in profile set on a blank wide background, while two simple paintings by Max Galyon show an equally fractured representational streak. David Antonio Cruz‘s everythingandthepastrychef uses both of these mediums, hybridizing representational and abstract painting with found objects, including fabric, enamel, and fragments of ceramic plates befitting of Julian Schnabel‘s early paintings. 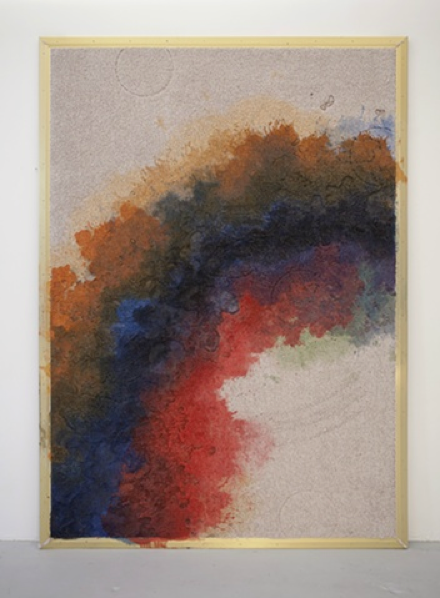 Such an impulse appears to look back further than any of the artists who reached out to this younger generation, though the works certainly retain the relaxed parameters of painting afforded by art of the 1980’s. Cruz’s work most closely resembles the miscegenated formalism of such forebears as Robert Rauschenberg and Richard Hamilton, a trend also seen in the works included by Matias Cuevas, two dyed carpets that have been framed and inclined against the gallery’s walls. They include indents that resemble the marks left by shoes in carpet, displaying a concern with indexical marks and found-material not so far off from work of the 1960’s. 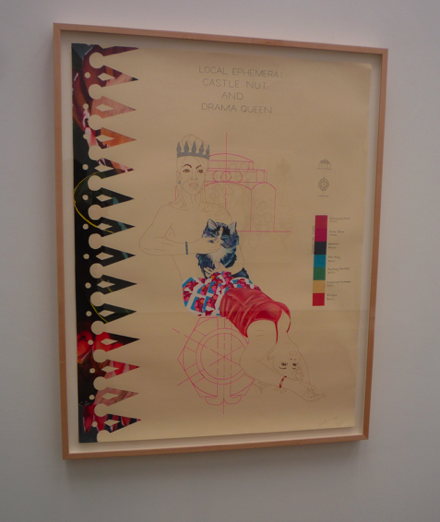 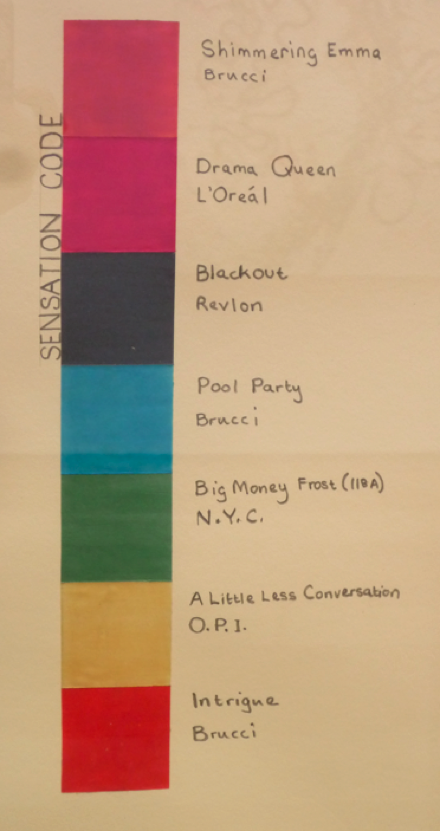 The abundance of painting in the exhibition does not however mean that every work is affirmative of that oft-besieged and polemical form. A welcome inclusion is Nicole Awai‘s work Specimen from Local Ephemera: Castle Nut and Drama Queen, which takes a feminist slant on the color swatch, ordering colors not by their chromatic designations but by their brand recognition: Revlon, L’Oreal, etc. The implication is that the chromatic scale is wedded to a masculinist ordering of domination, but its use here seems more to take a jibe at the color swatches of Duchamp‘s Tu m’ and Rauschenberg’s Rebus, intended by these earlier artists to act as a neutralizing and unexpressive distillation of color’s commercial applications. Here, Awai’s point is to reveal the expressive content of color in its application in cosmetics, as a “sensation code” rendered with nail polish. 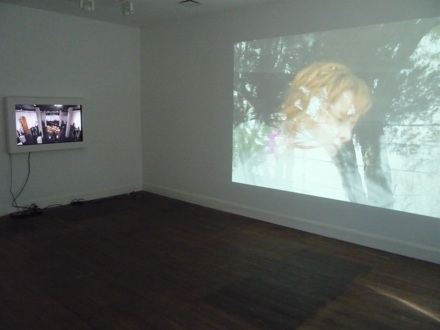 The show also includes two well-curated video works by Linda Post. Wisely situated in the upper gallery, the videos continue the themes of the first floor gallery while still acknowledging the breadth of difference in the mediums. Painting remains a concern. Low impact (WINDOW) shows a reflective window being painted by a man with broad elliptical strokes of white until the window is all but opaque, making the window into a white monochrome. Then, the man leaves and a woman enters to laboriously scrub off the white until the window again reflects the trees and skies of the outside. The division of labor challenges the supposed purity of the monochrome, gendering what has often been taken to be an abstract form. Taking a more critical stance on painting than seen in the downstairs gallery, but still achieving subtlety and an insightful quietude, Post’s inclusion most eloquently displays the gendered world of painting.

Given the high volume of painting heavy shows in galleries this summer–a trend that the New York Times’ Roberta Smith has described–it is perhaps not so surprising to see painting occupy such a central position in “Friends with Benefits.” The influence of the older generation is certainly a welcome way to maintain a cohesive exhibition from a medium of such disparate applications, which, particularly in today’s contemporary art climate, can often include the danger of lapsing into unfiltered acceptance of all things painted. Though not quite the free market of ideas that Lehmann Maupin would have us see in the gallery system, “Friends with Benefits” shows the common concerns between an older and a younger generation of artists. 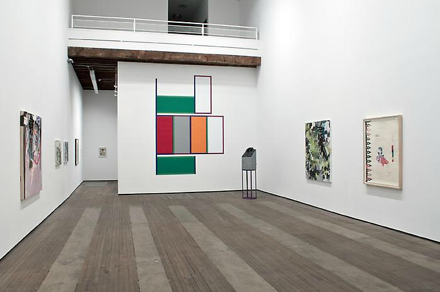 This entry was posted on Friday, August 10th, 2012 at 11:57 pm and is filed under Art News. You can follow any responses to this entry through the RSS 2.0 feed. You can leave a response, or trackback from your own site.