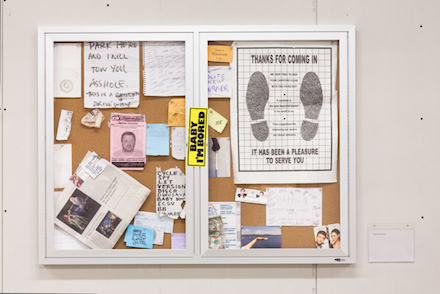 Nate Lowman, Bulletin Board (2012) via Venus Over Manhattan

“Bulletin Boards” at Venus Over Manhattan, collector Adam Lindemann’s new uptown gallery, is the product of a collaboration with White Columns, the downtown alternative art space directed by Matthew Higgs. On the heels of Venus Over Manhattan’s heady, decadent “Á rebours” inaugural show, which resulted in the sensational Dalí art theft, “Bulletin Boards brings a notably more experimental endeavor to the space’s industrial walls. The exhibition is modeled on a curatorial project that Higgs debuted ten years ago at the California College of Arts, in which a glazed aluminum bulletin board purchased from an office supply store would become a “project space” for invited artists such as Trisha Donnelly and Carter. In this show’s press release, Higgs states that “the project sought to gently subvert the typical function of a bulletin board, replacing the anticipated pertinent or useful information typically found in such places with something that approximated ‘art’.” In the project’s current manifestation, a selected group of artists and curators were invited to envision their own bulletin boards, resulting in the twenty-five works currently on display. Born from the same conceptual and material conditions presented by the constant of the bulletin board, the final works spring from the different variables employed by the individual artist and curators, resulting in a diverse assortment of ideas and aesthetics that multifariously engage, entertain, and confront the viewer.

Not surprisingly, many works play with the practical function of the bulletin board to comedic or critical ends, using it as a plane on which to tack bits and pieces of information or documentation. Nate Lowman’s board features random torn notebook pages scribbled with profanities, a random movie advertisement, a deflated balloon, and other quotidian bric-à-brac. Presented on the bulletin board, behind glass, the randomness appears to gain order, and the viewer is compelled to make meaning from the banal mix. Lowman’s answer to this intellectual quest is a sticker placed outside in the center of the case: “Baby, I’m Bored,” a semiotic, self-referential quip that directly and deliberately relates it to the work’s initial form. 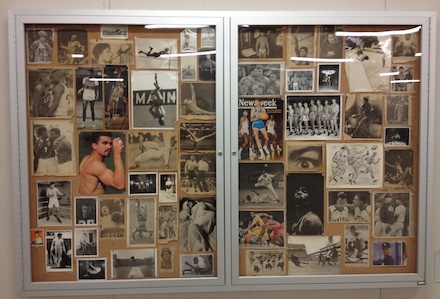 Vince Aletti, Bulletin Board (2012) via Venus Over Manhattan

Vince Aletti further plays with notions of aesthetic information, its organization and presentation. Aletti’s board is comprised of several tightly grouped images of male athletes, both vintage and contemporary. In a manner reminiscent of John Berger’s visual essays in his seminal Ways of Seeing (1972), Aletti uses the platform to starkly raise questions about masculinity and race in Western culture. 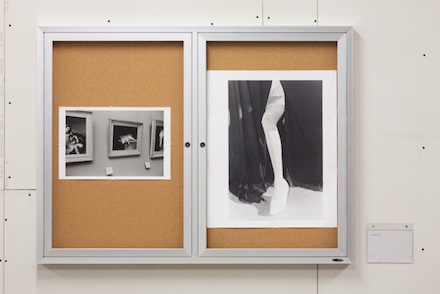 Judy Linn, Bulletin Board (2012) via Venus Over Manhattan

To a similar end, Judy Linn’s board is a poignant interrogation of the male gaze and female objectification. One side of her board presents a simple, erotic drawing of a female leg peeking out from the slit of a black skirt, her thigh-high stocking visible. On the other side is a vintage photograph of a traditional museum gallery, in which the form of a dead animal is visible in a still-life painting, a shape that mirrors the curve of the female leg. Silently and elegantly, the two images together bring up notions of cultural prey, class, and domination, an effect further emphasized by the images being locked under glass. 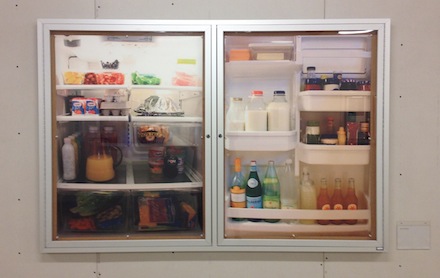 Gavin Brown, Bulletin Board (2012) via Venus Over Manhattan 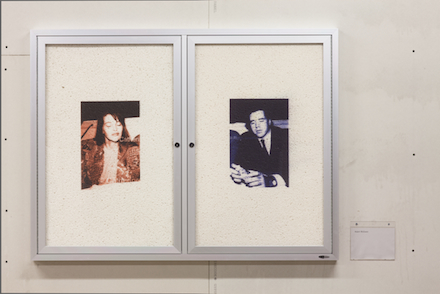 Adam McEwen, Bulletin Board (2012) via Venus Over Manhattan 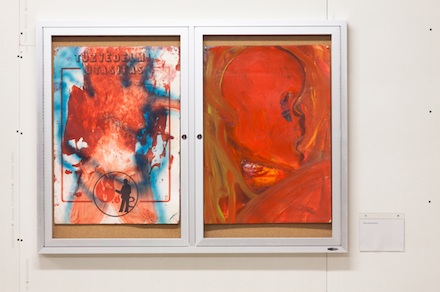 Rita Ackermann, Bulletin Board (2012) via Venus Over Manhattan 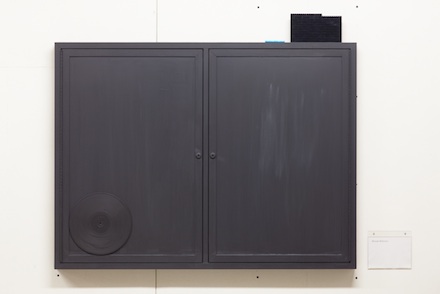 Michael Wilkinson, Bulletin Board (2012) via Venus Over Manhattan

The majority of the contributors use the platform additively, as a medium on which to present and locate their ideas and imagery, often appropriated. Michael Wilkinson and Daniel Turner refreshingly veer away from this trend. Wilkinson’s board is painted black, thwarting the viewer’s expectation to see through the vitrine, and turning it into a sculptural and conceptual object that channels Marcel Duchamp’s Fresh Widow (1920). In contrast, Turner uses the board as raw material. He has scraped away at the board’s surface to reveal its layers, resulting in an abstract sculptural hybrid that turns the board into an elegant topographic study. 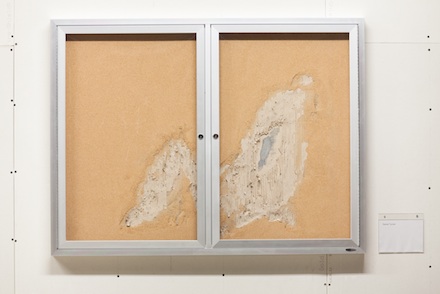 Daniel Turner, Bulletin Board (2012) via Venus Over Manhattan

Considered autonomously, many of the works on view are in themselves quiet successful. However, given the uniform starting point of each work, the great pleasure afforded by the show is the engagement of the viewer’s instinct to compare. In this way, the works are not only the final product of each artist or curator’s process, but they further incorporate the viewer’s ability to imagine that creative process, whether intellectual or physical. The viewer’s engagement is the final ingredient to the project, and this sense of community and experimentation is embodied in Brendan Dugan’s contribution, a manifestation of his Karma bookstore, in which visitors are invited to purchase books in an honor system. While the prices are set – a copy of Lady Chatterley’s Lover can be had for twenty dollars – the transaction is done at the buyer’s discretion. At the time of my visit the day after the opening party a few twenty dollar bills and some ones had been placed in the carved box that acts as the work’s “bank”. 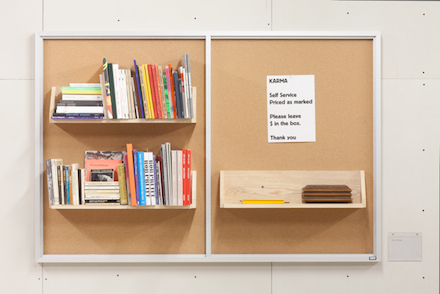 Brendan Dugan, Bulletin Board (2012) via Venus Over Manhattan

Playful, experimental, and with serious aesthetic and intellectual integrity, Bulletin Boards is Venus Over Manhattan’s successful sophomore exhibition. With this, Lindemann’s venture further proves itself as a an enriching addition to New York’s cultural landscape.

Bulletin Boards is on view through August 24. Venus Over Manhattan is located at 980 Madison Avenue. The works are on sale to benefit White Columns, New York. 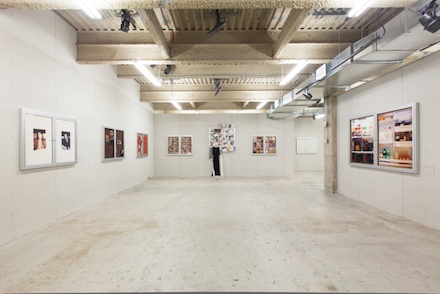 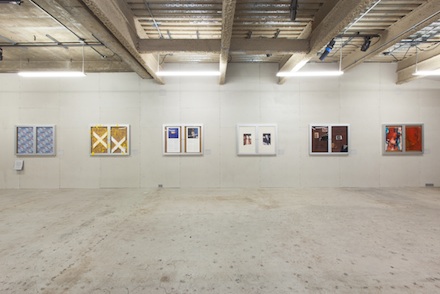 This entry was posted on Tuesday, August 14th, 2012 at 9:41 am and is filed under AO On Site, Art News. You can follow any responses to this entry through the RSS 2.0 feed. You can leave a response, or trackback from your own site.