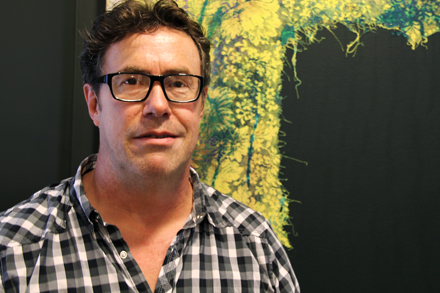 Mark Flood in front of his painting Entrada (2012) at the Hateful Years opening at Luxembourg & Dayan. All photos by Aubrey Roemer for Art Observed.

Mark Flood’s near mini-retrospective “The Hateful Years” opened this past Wednesday in the upper east-side gallery Luxembourg & Dayan. The five floors of the gallery are each devoted to separate bodies of work within the artist’s oeuvre. Starting on the ground floor with his well known lace paintings – the viewer moves chronologically backward in time through the various creative stages of Mark Flood’s self proclaimed “hateful” work. Exhibiting over 100 paintings, collages, sculptures, and mixed media works, this show redefines the scope and depth of Mark Flood’s vision as an artist. 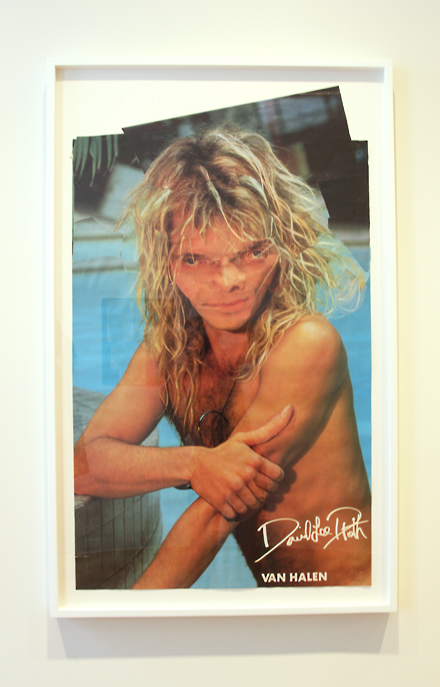 Somewhat of a cult “artist for artists” figure, Mark Flood is an anachronism. His lack of pretension and Texan sensibility are evident in his statements like “I don’t really care if people understand what I do – I do it for my own purposes.” He also remarked that “art is a shameful habit that needs to be justified,” and deemed it “the curse.” Flood began working in Houston as an artist in relative obscurity, while being a member of the band Culturecide. When questioned about his Texas roots, and their influence he remarked that he was “coming from the sticks with a worm’s eye view,” and that this isolation was great for his work.

Although the show is devoted to his work during the 1980’s, it begins with his current – and most recognizable  – lace paintings. These works are colorful abstract process paintings, which utilize lace for mark making and printing techniques. The four paintings on the ground floor are all brand new lace paintings created specifically for this exhibit. Brandishing titles like Sunday Morning, Roman Altar, and Sacred to the Gods, Mark insists that these beautiful paintings also possess a “hateful dimension.” When questioned about his transition to these seminal paintings from his earlier raw and overtly aggressive work, he commented “I was struck by lightening.” He said that he had been looking for a “novel technique” and stumbled upon the lace paintings. In discussing criticism – namely the accusation that the paintings are a calculated sell-out move – he remarked “If I knew how to sell out, I would have in 1978.” 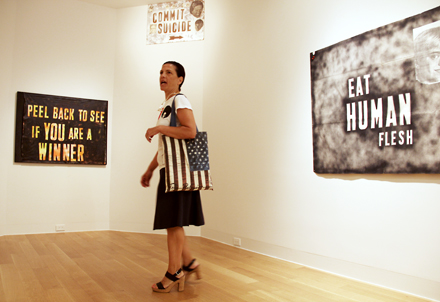 Installation view of the Hateful Years on the second floor at Luxembourg & Dayan. 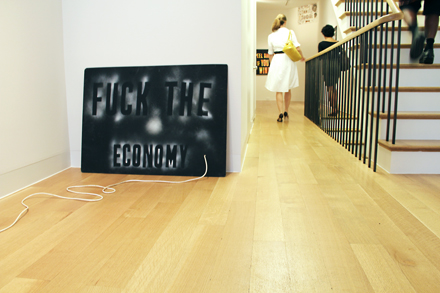 The second floor of the gallery is devoted to Flood’s text paintings, which bear grim and aggressive messages that are proclaimed like manifestos. Their sensibility is a cross between Christopher Wool and Daniel Johnston. For example, they are titled and actually state commands like EAT HUMAN FLESH and COMMIT SUICIDE. These statements seem to be commenting on a culture thick with violence and gore, while other messages are in passive appeasement to compensate for the darkness, such as WATCH TELEVISION and MASTURBATE OFTEN. Also on the second floor are a series of collages of pop culture star’s posters from the eighties. All of the celebrity faces have been mutilated and rendered grotesque through Flood’s process. There are many references to celebrities throughout the exhibition, whether directly or indirectly. Flood commentated that he “tried to be random,” and that most of the celebrities depicted were found in teen idol magazines, which initially Flood found “indistinguishable” until he followed them “exhaustively.” 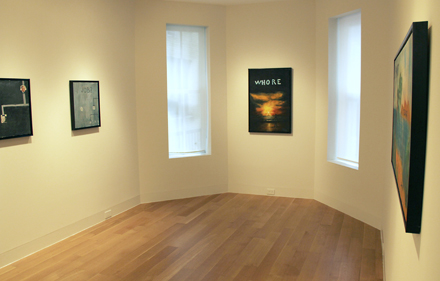 Installation View of the Hateful Years on the third floor of Luxembourg & Dayan. 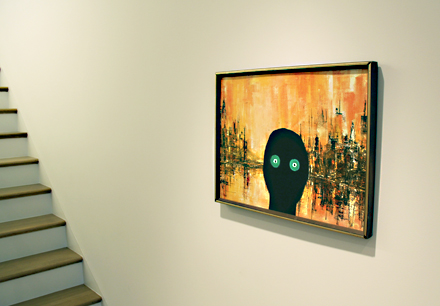 The third floor is devoted to earlier text paintings, as well as Flood’s thrift store paintings – some encompass both properties. The earlier text paintings have a definitive painterly feel that is heavy handy at moments when depicting objects representationally. The text paintings are completed in a kitschy manner that is undermined by the inclusive text. They are exceptionally humorous, sarcastic, and perceptive commentary on the banality of a worker, consumer, and a member of our culture. In tandem with these are the thrift store paintings, in which Flood literally purchased paintings second hand and then worked on top of them. Namely, he carves out the eyes, as well as adding additional eyes to some of the figures. Flood discussed the role of idolatry and its relationship with “huge eyes,” as an influence behind this work. 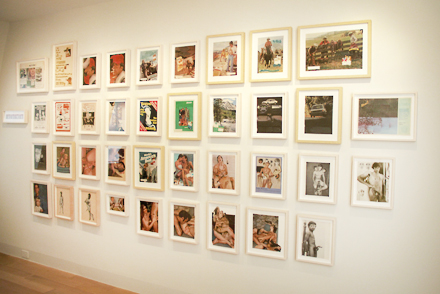 Installation view of Mark Flood’s collages on the fourth floor at Luxembourg & Dayan. 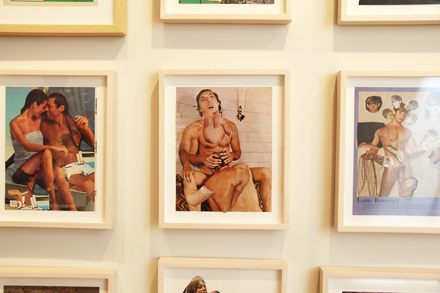 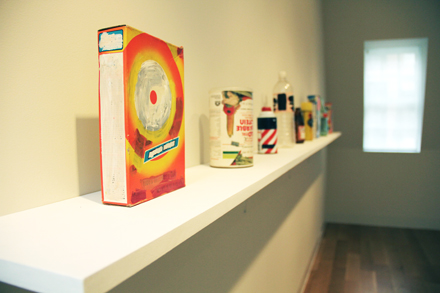 On the fourth floor, Flood’s “muted” found objects and magazine – the mostly adult magazines – collages are on view. There is an entire wall filled with small grotesque re-representations of sex scenes, portraits, ads, etc. The range from being mildly offensive to even more explicit and abrasive than the original image – which is notable when the source material was often hard core imagery. The muted objects are all found packaging that is instantly recognizable – like a Coke bottle or a Tide box – yet their logos have been washed away by rather tender painterly strokes. His repurposing of the items and images in which we buy, sell, and live with speak to the various levels of our consumer culture – the ubiquity, the absurdity, and the vulgarity of it. 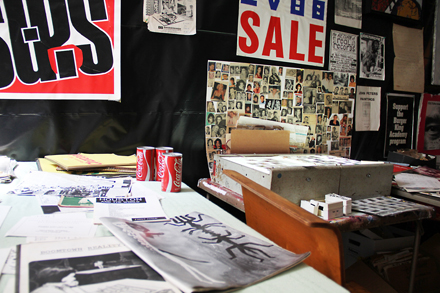 Installation View of the Hateful Years on the fifth floor at Luxembourg & Dayan. 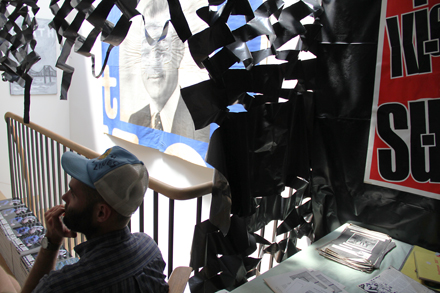 Installation View of the Hateful Years with Mescalito on the fifth floor of Luxembourg & Dayan. 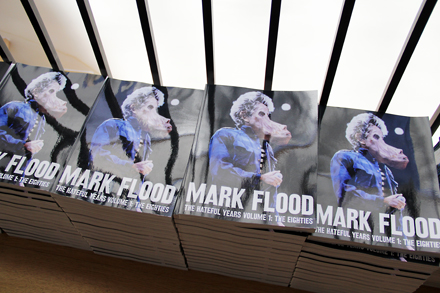 The fifth floor is a recreation installation of a young Mark Flood punk rock den – complete with a young Mark Flood actor roaming around. Every surface of the walls and tables are covered. There is even a bed in the room. It definitely conjures up a youthful artist’s bedroom / studio. Guarding over a stack of Mark Flood catalogues is “Mescalito,” who is described by Flood as an “artist drifter.”  “Mescalito” is the personality in Mark Flood’s newest music video that accompanies the show – he lip synchs Flood’s artist statement rap in the video. Flood creates a music video for every show that he has  – there are twelve so far.

Overall, the show is a raw, gripping, and honest look at Mark Flood as an artist. It is vulgar, it is messy, it is hateful, and it is beautifully spell binding. Most of this work has never seen the light of day outside of the warehouse it was in, and is on view for the first time. Flood quipped “the quantity of art frightened my family – it was like an episode of Hoarders.”

This entry was posted on Wednesday, August 8th, 2012 at 9:07 pm and is filed under Art News. You can follow any responses to this entry through the RSS 2.0 feed. You can leave a response, or trackback from your own site.