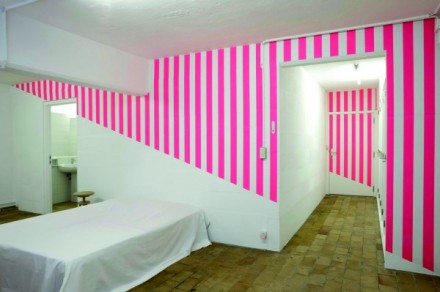 In 1986, French artist Daniel Buren created an installation for the home of collectors Annick and Anton Herbert called “Le Décor et son Double”. He installed a copy of the room in the Museum of Contemporary Art in Ghent. This second copy was recently conserved and acquired by the museum (now renamed S.M.A.K.) and is being exhibited once again. 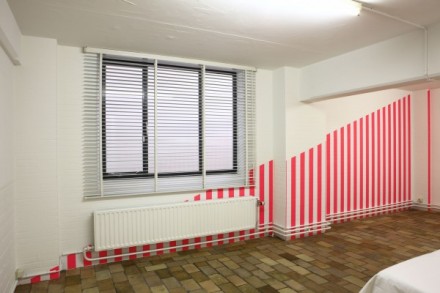 The work was part of a series called “Chambres d’Amis” from 1986 in which curator Jan Hoet arranged for artists to create work inside of collectors’ homes throughout the city of Ghent. 58 artists participated, among them Sol LeWitt, Bruce Nauman, Günter Förg, Christian Boltanski, Joseph Kosuth, Jannis Kounellis and Mario Merz. The exhibition was conceived as a way to bring an installation into the homes of townspeople, thereby removing it from the museum setting.

The artists had to transform the interiors – or the “friends’ rooms” — into an artwork. They carried out the project in homes of collectors and artists, but also in houses that belonged to citizens completely uninvolved with any sort of dialogue about art. The artists aimed to integrate the artwork with the families’ lives, diverging from the fetishism of the object, as they had come to regard the result of exhibiting work in museums alone.

Their task was to work within a preexisting structure – a family’s home and the objects within – to be able to allow the work itself to control the artist’s process. Hoet’s show became about the relationship of public and private display, and the making, of art. 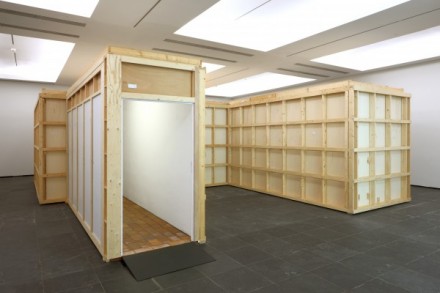 One example of an historic series of works, Buren’s installation fundamentally transforms space within the construct of an occupied private home by using a pattern of fuschia and white stripes, playing with spatial configurations and perception.

The installation has been reconstructed and is on view through November 4th.

This entry was posted on Sunday, September 23rd, 2012 at 12:58 am and is filed under Art News, Go See. You can follow any responses to this entry through the RSS 2.0 feed. You can leave a response, or trackback from your own site.