Peter Fischli and David Weiss currently have an exhibition at the Sprueth Magers gallery in London, which displays somber overtones coinciding with Weiss’ untimely death in April of this year.

An array of clean-cut unfired clay and industrial-looking rubber has been meticulously molded and scrupulously carved to mimic everyday objects of construction in the form of “walls, corners and tubes”. The works, executed between 2010 and 2012, and are connected to the group of works that the artists displayed at the 54th Venice Biennial in 2011. The clean, particular presentation of the scaled objects on virgin white plinths is a visual departure from earlier works.

Fischli and Weiss’ collaboration began in 1979 and with their first ever work Wurst Serie (Sausage Series). The humorous alliteration that echoes childhood clichés and tongue twisters amplifies the youthful nature of their biography of works. Their collaborations often involve a melodrama of carefully constructed installtions from a child’s viewpoint. Their most famous work, Der Lauf der Dinge – The Way Things go, consists of a half-hour long sequence of a chain reaction whereby fireworks, tires and foam interact seamlessly drawing a conclusion in a final puff of smoke. Everyday materials, somewhat mundane in individual presence, combine to create a child-like insight into the nostalgic. 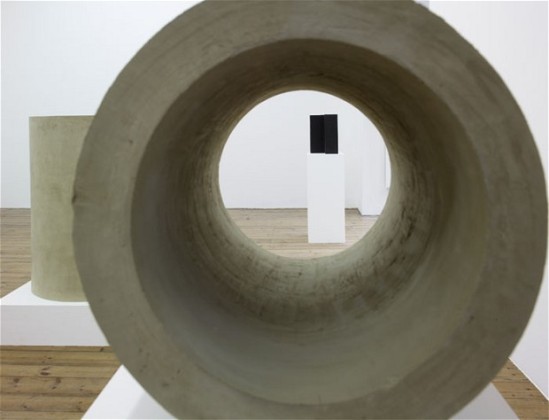 The harmony that exists within this series examines medium and form, in distorted scale, forcing new interpretation and meaning, while referencing the objecthood of Minimalism of the 1960s. The harsh blackened rubber is simultaneously absorptive and reflective, drawing in the light via the natural sheen of the medium. It provides an industrial feel that reflects the pipe-like composition of many of the miniature works randomly interspersed throughout the gallery. The unfired clay is also similarly absorptive but in an opposing manner to the aesthetic sheen of the rubber. The drawing in of the light to the clay is achieved by the matte texture of its surface, more earthen and natural than the manmade rubber. 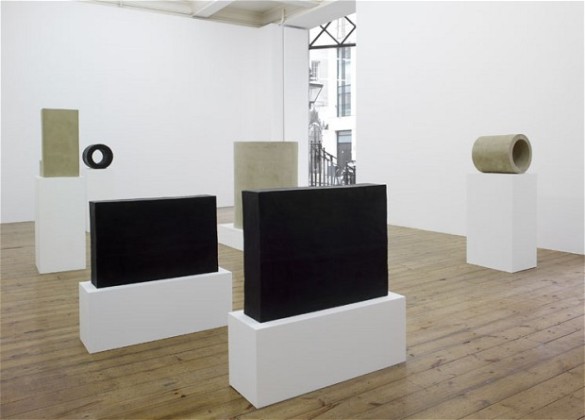 The layout of the show allows the viewer to easily observe the works and move freely in between the precise sculptures, giving it a feeling of 60s minimalism yet open to further interpretation. The works sit squarely within the domestic, reducing themselves to the familiar, the essential and the basic. The pieces reference structural supports – ‘walls and corners’- components working together, and are perhaps even directly self-referential. The exhibition seems to pay homage to the late David Weiss and to a longstanding collaborative relationship.

This entry was posted on Saturday, November 3rd, 2012 at 3:12 pm and is filed under Art News, Galleries, Go See. You can follow any responses to this entry through the RSS 2.0 feed. You can leave a response, or trackback from your own site.