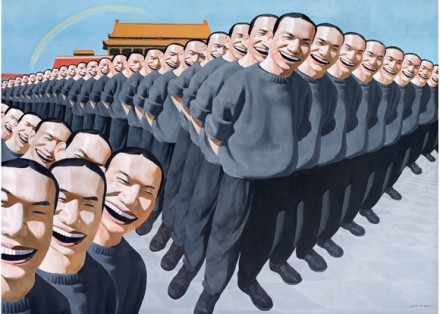 On view through March 17 at the Fondation Cartier in Paris is an exhibition of the emblematic work of Yue Minjun. Appropriately titled “L’ombre du fou rire (The shadow of crazy laughter),” the show features Minjun’s large-scale paintings easily identified by caricatured self-portraits frozen in laughter that have rapidly gained international popularity in recent years.

This is the first large scale European showing of the Chinese artist’s work, and includes early paintings and preparatory drawings on display for the first time. Minjun’s early works that focus on his friends, painting their portraits in recognizable spaces in China. While these paintings are more realistic than his later work, stylistic elements like the use of landmarks in China and cultural symbols begin to appear. The figures evolve to feature only a singular character – an exaggerated image of the artist with his eyes closed and mouth agape in a caricatured expression of laughter. 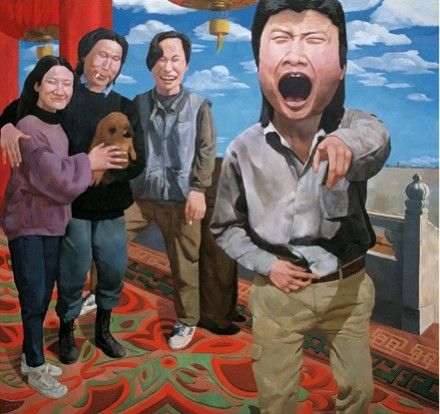 The endlessly recurring stretched grins do not convey a sense of joy; the portraits are in fact unsettling and often bizarre. “I found a comical way to express something tragic,” said the artist in a recent interview with AFP. Having grown up during the Chinese cultural revolution, the empty mirth echoes the disillusionment towards contemporary Chinese society and a way to tolerate a world that has become absurd.

Minjun has been coined one of the more successful artists of the Cynical Realism movement that was born out of the tense political climate in China in the 90s. This generation of artists began to look critically at the collective mindset and move toward personal expression. 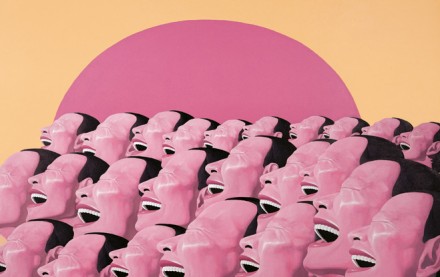 The artist appears in a variety of scenarios, directly referencing history or cultural symbols within imagined environments. The most unsettling paintings are those where the artist multiplies his image, and serial clones of himself take over the canvas, referencing the homogenization of society in China where the individual no longer exists. 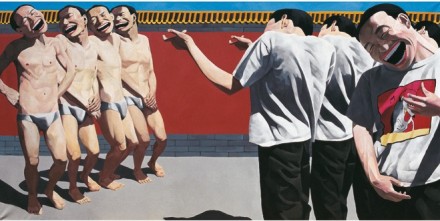 The artist also looks to the West, sourcing imagery of art historical masterpieces from the likes of Delacroix and Velázquez, replacing the characters with his laughing self-portrait. The Execution (1995), a work that drew attention to the artist when it broke records upon its sale in 2007, is based on The Execution of the Emperor Maxamillion of Mexico (1868-69) by Manet and features the artist, multiplied in place of the original protagonists. The execution Minjun is alluding to here is the June 4th Tinanamen protest of 1989, that became known as the Tiananmen Square Massacre after a catastrophic crackdown of the Chinese army on protesters. 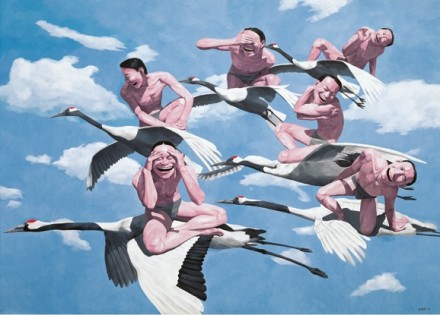 While the work maintains critical scrutiny on political and cultural realities, when considering Minjun’s body of work as a whole, it becomes clear that a more powerful current is driving Minjun’s practice and popularity. He has created a brand identity, throwing his image on anything making it instantly recognizable. Perhaps, then, the laughter is indeed genuine, directed outward at us, the consumer. 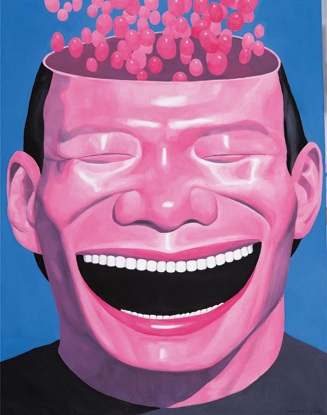 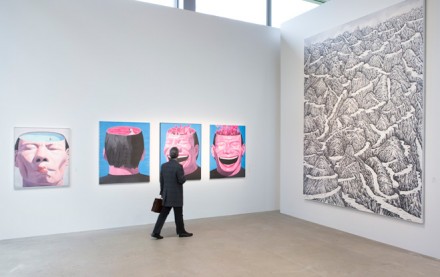 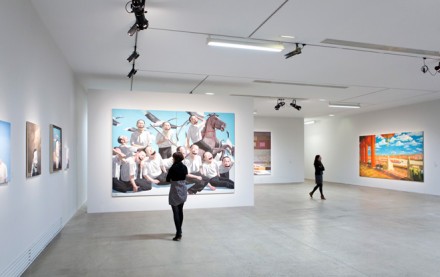 This entry was posted on Sunday, December 9th, 2012 at 1:05 am and is filed under Art News, Go See. You can follow any responses to this entry through the RSS 2.0 feed. You can leave a response, or trackback from your own site.