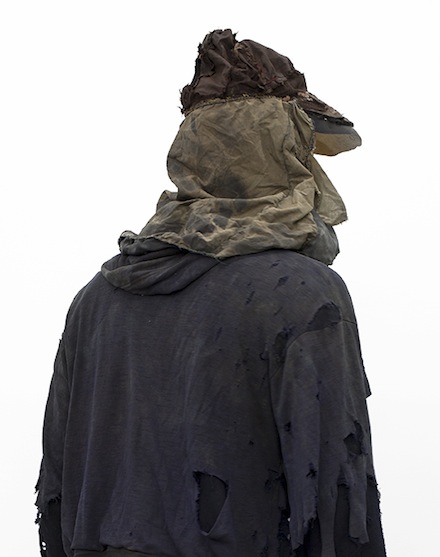 Since his first solo exhibition at Grimm Gallery, Amsterdam in 2010, Brooklyn-based artist Nick van Woert has quickly risen through the ranks of the contemporary arts scene, creating a prolific and experimental body of work informed by his unique interests in history, architecture, environment, and philosophy.  From ancient Rome to the Unabomber, van Woert casts an eye on the past as a means of understanding the present and inquiring into the future. His work blends an emphasis on sculptural craft and process with the use of found objects and readymades, resting between aesthetic value and conceptual statement. While preparing for the opening of No Man’s Land, his first exhibition at OHWOW in Los Angeles, (open through April 6, 2013), the artist sat down to answer some questions for Art Observed. 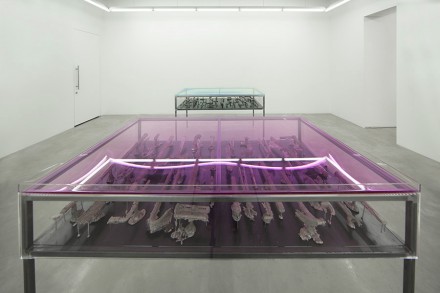 Nick van Woert, No Man’s Land (2013), Courtesy of the artist and OHWOW

Art Observed: Your use of material is varied. In one particular series of sculptures, you explore the intrinsic physical characteristics of poured urethane, while in another you present hazardous, artificial materials – such as the ingredients for a homemade bomb – within clear enclosures, thus emphasizing their cultural significance as well as their purely visual power. You also incorporate found or readymade objects into your works. Can you elaborate on your choice of materials, and their particular meaning or use within the context of your greater vision?

Nick Van Woert: The materials should be as varied as the world around me. What I see and touch everyday is what I want to work with, it’s all I have to work with. So half of the materials I use have some kind of personal connection to my life and history, the other half I have adopted from people I find interesting and who have developed an unorthodox relationship to a particular material that in some way parallels my understanding of the way things work and the story I would like to tell. What I’ve started to see and what has defined the subtext to much of the work I do is that the comfort that many materials provide is only camouflage for the horror underneath. A perfect example of this is the combination of hair gel and chlorine. Both materials support a life of wealth and vanity but when mixed a chemical reaction occurs that gets hot enough to catch gas on fire. Dave Foreman describes how hair gel and chlorine can be used as a fuse in a section dedicated to destroying billboards in his book, EcoDefense: A Field Guide to Monkeywrenching. That book changed the way I see. It’s similar to Improvised Munitions Handbook, an Army field manual, where they lay out recipes for disaster concocted from everyday household materials. 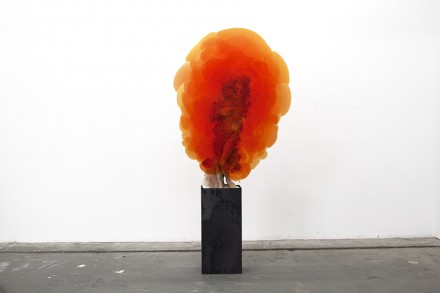 AO: You have received much attention for your interest in Ted Kaczynski, and have related his anti-establishment views and self-imposed exile to 19th century nature poets such as Thoreau.  The trope of the solitary, hermetic genius certainly appears in the visual arts, as well – think of Pollock in his studio, or Gaugin in Tahiti. Do you see yourself in this role at all, or feel pressure to present yourself as such?

NvW: I don’t see myself in that role, nor do I have a desire to fulfill it. I am interested in returning to nature, living simply and off the land as a way of re-examining the way I live now. It’s absolutely critical to act on the world with severe and deliberate cooperation, and the more variables involved, the more interesting and accurate the story becomes. Isolation isn’t a necessary component. 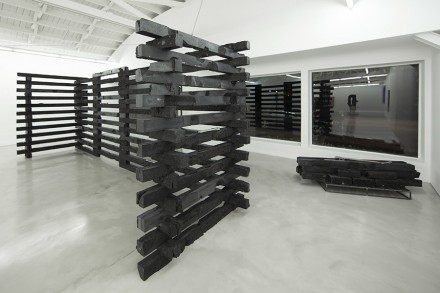 Nick van Woert, Lines No Fire Could Burn (2013), Courtesy of the artist and OHWOW

AO: You have in the past noted Rembrandt’s famous painting The Anatomy Lesson of Dr. Nicolaes Tulp (1631) as a major influence. Indeed, much of your work addresses the history of art and science, as exemplified by works such as Haruspex (2010), based on an ancient Roman land-scouting custom, or your tool works, which look like archeological artifacts themselves. Could you elaborate a bit on the particular ideas or concepts that inspire you?

NvW: That painting is a perfect example of what life is all about for me. There is nothing we are more familiar with than our own bodies and to see what we know so well in a way that we have never seen it before is a magical thing. It alters your perception and you can see the world change right before your eyes. Everything you thought can get turned upside down in seconds. Cutting something open as in anatomy, digging something up as in archaeology, or defacing something, are all active methods of discovery that translate easily into sculpture. 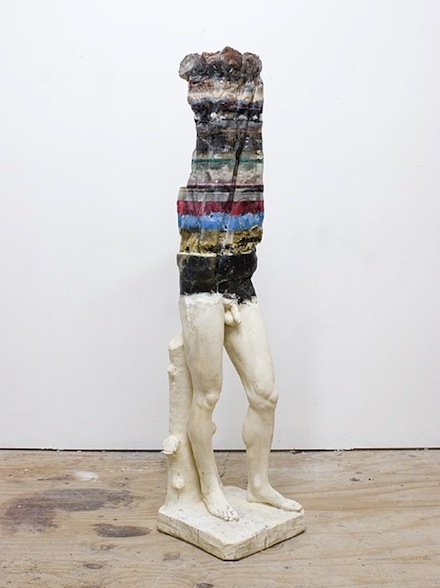 AO: While you do have studio assistants, you are very involved in the physical creation of your artworks. Could you describe your creative process a bit?

NvW: Without them I would have very little to show and this story would remain in its infancy, inside my head, for the length of my life. I want to grow, change, and become someone I never thought possible. I want to exhaust every thought, every hunch. But on a day to day basis, I usually don’t know what we are going to be working on tomorrow. That can be a bit of a burden. So while they are working on yesterday’s project I am working on tomorrow’s. All of the work is made inside the studio by us. I like to be self-sufficient, if someone else can do it than so can I. On top of that I am impatient and hate talking on the phone so instead of picking up the phone and calling it in I sit down and figure it. We are usually faster and become more dexterous at the same time. It’s been liberating because you can see the versatility of a material rather than falling victim to the standards defined by industry.

AO: Your current show at OHWOW features a new body of flat, monochromatic works that are more akin to traditional minimalist paintings. How do you account for this new trend, and how do you see your work developing in the future?

NvW: Erratic (2012), So Fresh and So Clean (2011), Anatomy (2011), Home and Garden (2011) and Haruspex (2010) all have a relationship to painting. In particular the tradition of landscape painting. These new ones try to make the relationship to landscape painting more clear by hanging them on the wall. The dominant material in these new ones is cat litter but they all involve artificial materials that are in some way made as substitutions for natural ones. For the future I hope to discover new and more accurate ways of articulating what I see. 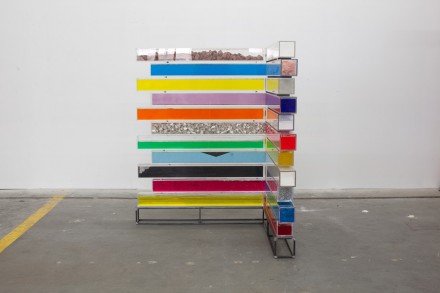 AO: Artist Matthew Day Jackson has supported your career tremendously, including you in shows he curated at both Grimm Gallery, Amsterdam, and Hauser & Wirth, New York. Which contemporary artists do you admire and why? 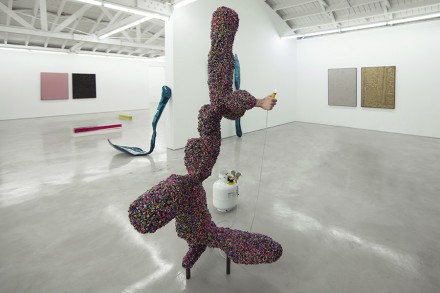 This entry was posted on Tuesday, March 26th, 2013 at 10:45 am and is filed under Art News. You can follow any responses to this entry through the RSS 2.0 feed. You can leave a response, or trackback from your own site.