The inaugural show at David Zwirner’s spacious new location on W. 20th Street in Manhattan is a pairing of two of minimalism’s major figures and long-time friends, Donald Judd and Dan Flavin.  Given the size of the new location, with its towering ceilings and ample floor space, the show is sparese in both form and quantity, containing 8 illuminated frameworks by Flavin and 5 welded steel boxes by Judd. 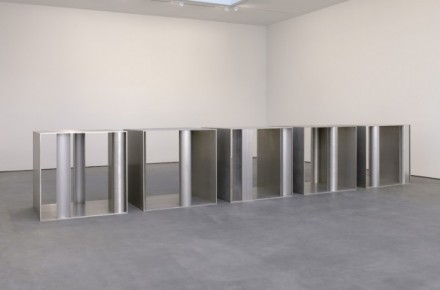 Flavin’s work, European Couples, are made with commercially available 8 foot fluorescent bulbs that are sutured together with adjacent sides facing opposite ways. Each square uses a monochromatic light of one of 8 main colors: yellow, pink, red, blue, green, warm white, cool white, daylight, and soft white.  In a striking choice, the gallery has exhibited all of the white frames in a single room, allowing different shades to blend together, and causing pause for meditation on how the commercially manufactured ultimately illuminates, defines, and encapsulates the entire modality of what we see inside its framework. 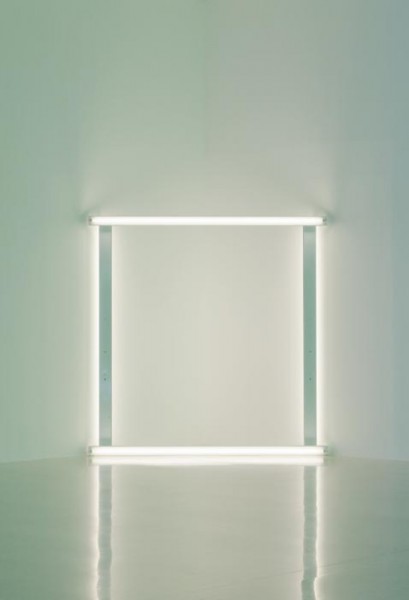 Each of Flavin’s works is established in the corners of the rooms, pushing its light outwards and up the walls, saturating rooms in soft colors and suffusing light.  Like fellow light artist James Turrell, there is something spiritual about Flavin’s iridescent work (This might come from the piece itself also being the lone source of light, or the nature of light art), but rather than offering transcendence or escape from the banality of this world (as it is for Turrel), Flavin seems more concerned in a narrowing of the boundaries between art, commodity and spirituality. By using the commercially available, Flavin points towards a pervasive and uniform overlapping of the spiritual with the manufactured in the context of mass consumption.  Refusing any value judgements, the works merely show how the flows of light, money and production are all entwined and diffusing limitlessly in space.

The show also features a selection of drawings from Flavin’s initial plans for the works, offering a deeper look into the artist’s conception and creation of these subtle structures. 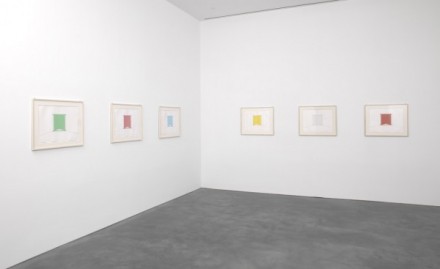 In an adjacent room, Donald Judd’s untitled work consists of 5 large hollow aluminum boxes, sparsely bounded with columns while still allowing the viewer a limited view of the other side.  The columns, alternating between solid, hollow, or convex, create surfaces that play with the process of sight, deflecting vision or pulling it inwards based on each individual shape. 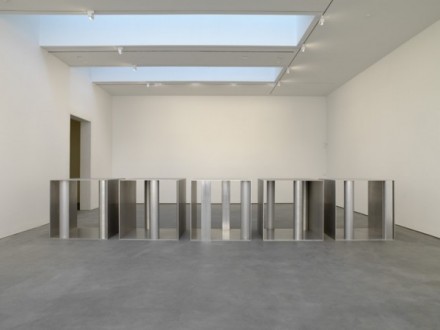 What is most striking about Judd’s piece, as common with his work, is the deft economy of space. Using only reflective, metallic material, Judd creates infrastructures that remind one that the only available space is that of one’s defining architectures.  That is, the most beautiful moments of Judd’s untitled piece lay within the most narrow of spaces, between the cubical structure and the columns placed within. Inside a centimeter’s width and density, there is still room for the viewer, despite the illusory tightness of the sculpture. How the mind and the eyes lide off or pool into each space becomes resoundingly important. 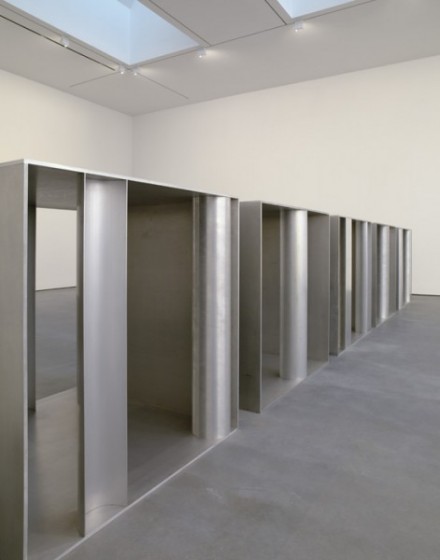 Perhaps the most powerful moment comes with the interaction of multiple gallery visitors with the piece.  With viewers at opposite ends of the room, gazing across the silver sheen of Judd’s massive work, the eye is forced to interact with both the viewer and the silver sheen of the sculpture, an elegant representation of the space between indviduals and the experience of human encounter. 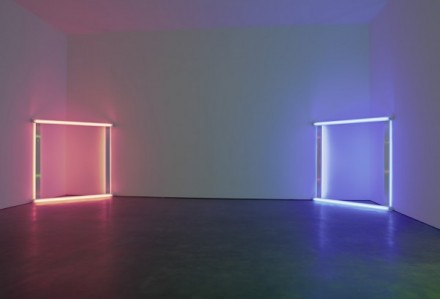 For such a massive gallery to open with a show so dedicated to space and its play is poignant. While the use of such big names for a first opening is clearly a safe move, the emptiness of the galleries, as highlighted by Flavin and Judd, only makes one wonder about the vast potential  and possibilities before the gallery and its new wealth of open space.  The dual show is on view until March 21st. 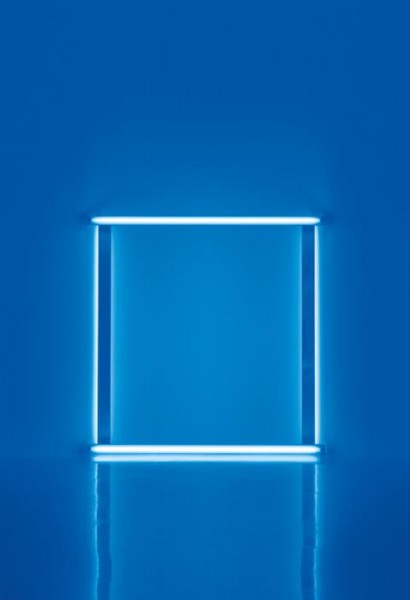 This entry was posted on Monday, March 18th, 2013 at 9:25 am and is filed under Art News. You can follow any responses to this entry through the RSS 2.0 feed. You can leave a response, or trackback from your own site.