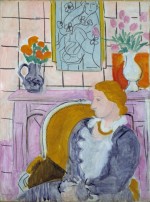 The family of late Paris gallery owner Paul Rosenberg has demanded that the Henie Onstand Arts Center in Oslo return a number of paintings seized from him during the German occupation of Paris during World War II .  While the family has provided documents claiming a number of works, including Matisse’s Woman in Blue in Front of Fireplace, the Norwegian museum claims it had no indication that the work was plundered when it was purchased 60 years ago, and that the painting is now the property of the museum under Norwegian law. “We need to investigate this matter properly,” Says museum director Tone Hansen. “It is too early to draw any conclusions. We are in dialogue with the family and will continue to be so. This case has other aspects than pure legal aspects that have to be taken into consideration.”

This entry was posted on Saturday, April 6th, 2013 at 6:57 pm and is filed under Art News. You can follow any responses to this entry through the RSS 2.0 feed. You can leave a response, or trackback from your own site.