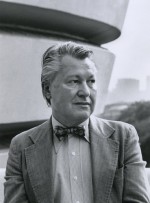 Thomas Messer, the legendary former director of the Guggenheim Foundation, passed away on Wednesday at the age of 93.  Messer, who came to the gallery in 1961, just two years after it moved into its signature building on Fifth Avenue, was instrumental in shaping the Guggenheim into the global institution it is today, developing its collection and tirelessly working to expand its mission.  “Here we are, three decades later, with Guggenheims in Bilbao, Berlin, Venice, and soon to be Abu Dhabi. The foundation for all this was laid by Tom Messer. And I can tell you, he laid that foundation under budget.”  said former Guggenheim President Peter Lawson-Johnston.

This entry was posted on Thursday, May 16th, 2013 at 11:41 pm and is filed under Art News. You can follow any responses to this entry through the RSS 2.0 feed. You can leave a response, or trackback from your own site.