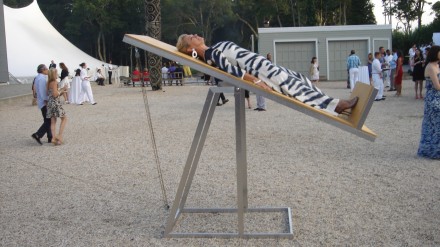 This year’s Watermill Benefit, the annual summer event supporting Robert Wilson’s performance lab in Water Mill, New York, welcomed over 1,200 guests to Wilson’s 8-acre property, presenting over 20 site-specific performances, as well as a silent auction featuring over 100 works. Following this, 700 guests dined under a large outdoor tent to watch the Simon de Pury-led live auction of works by Andy Warhol, Jean-Michael Basquiat, Luc Tuymans, and Tseng Kwong-Chi, among others, with master of ceremonies Alan Cumming, and appearances by Winona Ryder, Marina Abramovic, and Lady Gaga.  Titled Devil’s Heaven, the event showcased a diverse group of performances which differed in content, but effectively came together to produce an ominous and sensual atmosphere as guests followed the prescribed path through the foundation’s grounds, appropriately lit by the setting sun and the fire of tiki torches. 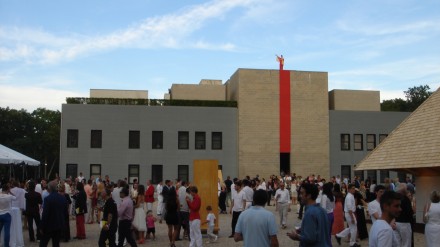 View of Watermill grounds, courtesy Matthew Teti for Art ObservedStepping onto the center’s grounds, one immediately entered into the otherworldly realm created by the performances, situated as they were throughout the wooded groves and enclaves that surround the main building. Trina Merry’s Magnolias – two nude figures embracing on a pedestal with full body-paint depicting a floral design – stood at direct center at the entrance to the event.  Statuesque and silent, Merry’s jarring work set the tone for the show to come. 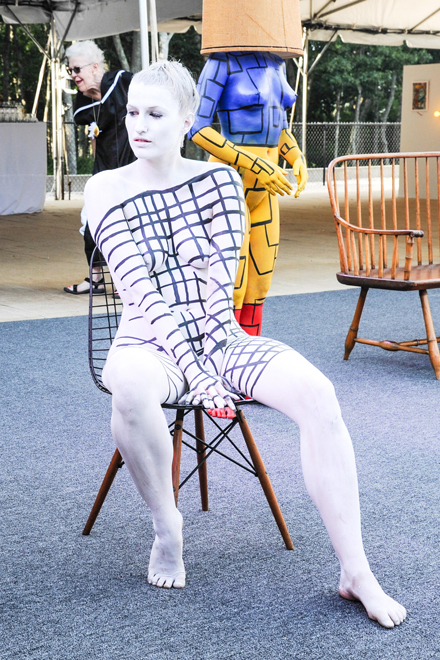 After climbing the monumental steps up to the main building, visually impressive by themselves, visitors passed through the vestibule, featuring works by John Messinger and Carl Lawrence, one entered the main arena, which presented Robert Wilson’s engaging Stargazer Beds. Six of these “beds” were scattered around the area, and guests were invited to participate by climbing onto the wooden supports and experiencing the creeping force of gravity as the objects were pulled down from the back by an attendant, horizontally orienting the viewer toward the sky, allowing one to engage artistically through physical surrender. 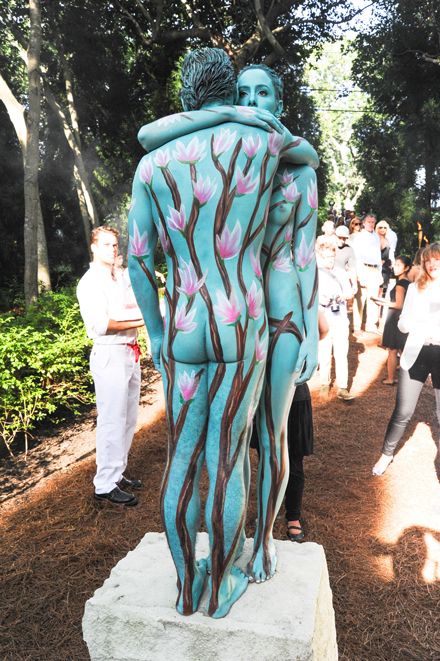 Also on view in this central area was African House, an exhibition of the work of Clementine Hunter, the African-American folk artist who inspired Wilson’s recent theater work Zinnias. Alongside Hunter, Dieter Meier and the Yello Years, officially opened on the evening of the benefit. The latter, a showcase of work curated by Harald Falckenberg and Tony Guerrero, focused on the filmic works of music video director and musician Dieter Meier. The two shows will remain on view at Watermill through August 11 and September 1, respectively. 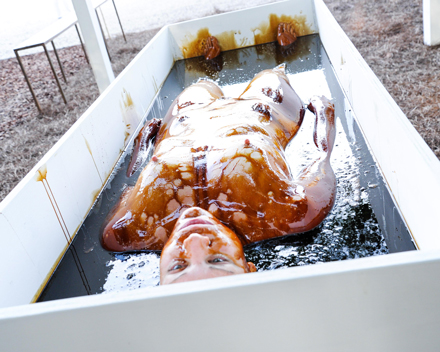 Advancing through to the rest of the event’s performances, one entered the surrounding brush, where the majority of works were situated in an ethereal, forested setting. One of the first, Lisa Lozano’s Funérailles de Miel, presented a nude woman immersed in a dark, viscous liquid – conceivably honey –  and encased in an open coffin-like box, suggesting Joseph Beuys’s elemental mythology. Works such as Amnesia by Dilek Acay, (a trio of white-clad performers flanking either side of the path, calling out strange sounds as viewers passed through), or Yao Zhang’s My Favorite Food,  (two performers in disturbingly theatrical make-up appeared to enact a mysterious ritual involving a faceless, Magritte-like figure fashioned from a large tube spewing bubbles), promoted the pervasive sense of equally ominous and attractive danger that characterized the works as a whole.  The setting, of course, also complemented the events to dramatic effect. Indeed, nature itself presented a potential threat, with Trina Merry’s Enchanted Forest performers silently, suggestively slithering around tree trunks and in branches, evoking the haunting performances of Ana Mendieta. 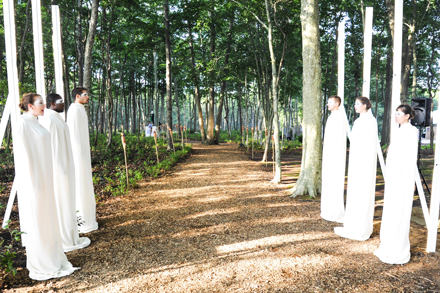 Evangelia Rantou’s performance of Solo with Chairs from Medea(2) by Dimitris Papaioannou, in which she presented a slow, mournfully seductive dance with two chairs in a rectangular pool of dark water, was a particularly strong performative example, due to its enigmatic sense of time and movement. Audiences were invited to sit and observe the work contemplatively. 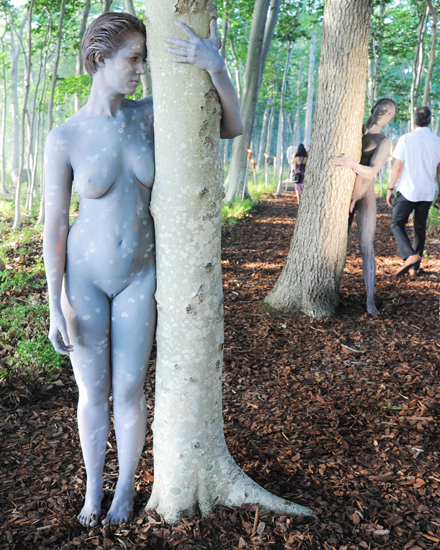 The motif of furniture came up again in the performance on view in the center of the silent auction tent. Another one of Trina Merry’s works, Objectified, featured nude women painted in modernist grids, patterns and colors that evoked Piet Mondrian’s graphic compositions, in poses that either mimicked pieces of furniture or conflated the performers’ bodies with such objects. Merry’s forniphiliac gesture was an appropriate and witty contribution to an event that successfully employed methods at the intersection of object-based art and commerce to benefit the intangible art of performance. 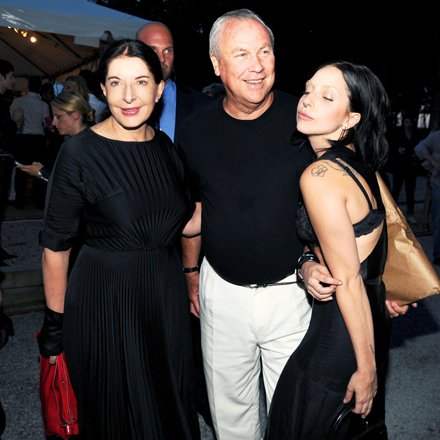 Ultimately, the night of art and entertainment raised a total of $1.85 million, which will go to sustaining the foundation’s commitment to educating, supporting, and promoting emerging artists and their performative works. 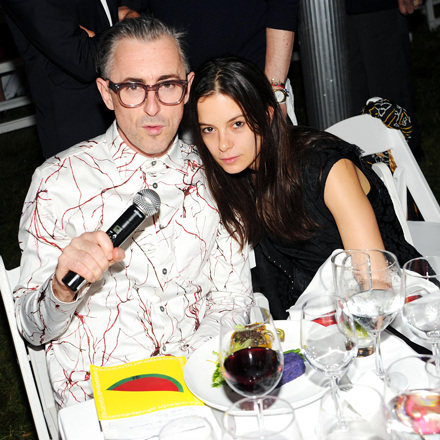 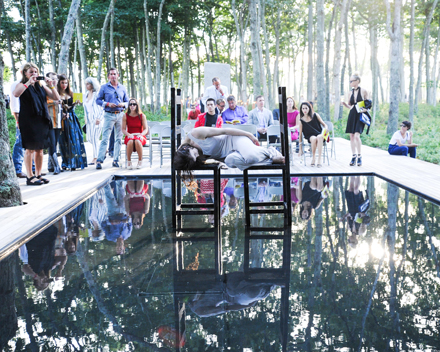 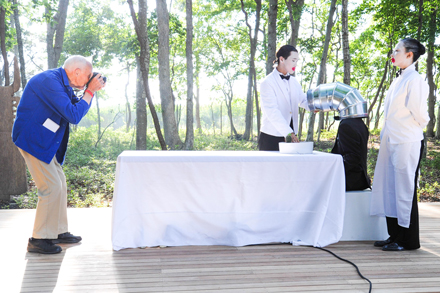 This entry was posted on Wednesday, July 31st, 2013 at 4:28 pm and is filed under Art News. You can follow any responses to this entry through the RSS 2.0 feed. You can leave a response, or trackback from your own site.