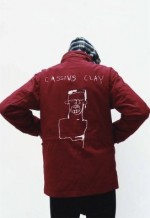 Urban fashion company Supreme has just unveiled its Fall lookbook, which has partnered with the estate of Jean-Michel Basquiat to include a number of graphics and images from the paintings of late artist.  In one photo, a model sports a red denim jacket, with Basquiat’s famous Cassius Clay figure.  Other pieces feature Basquiat’s signature textual juxtapositions and images.

See the line at Complex

This entry was posted on Tuesday, August 20th, 2013 at 12:06 pm and is filed under Art News. You can follow any responses to this entry through the RSS 2.0 feed. You can leave a response, or trackback from your own site.