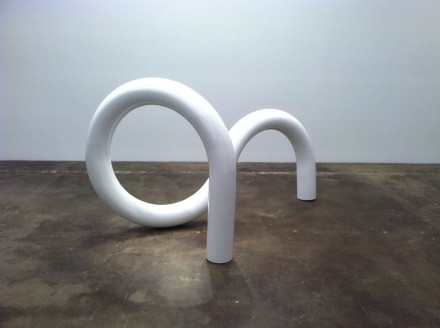 There’s an interesting approach to spatial relations that runs through most of Carol Bove’s body of work, almost always insisting on an awareness of the exhibition space, and how this space connects with the sculptural works that fill it.  For her newest show of works at Maccarone in the West Village, Bove continues this trend, running a number of enormous shell girders through that space, always appearing as if they had intentionally been placed there as part of the space’s construction. 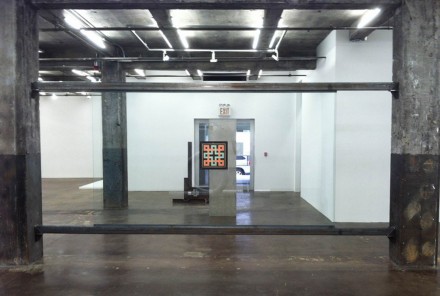 Bove seems to enjoy a challenge.  Her current exhibition on the Highline took into account both the conditions of the soon to be developed railyard’s position on the Hudson while looking back at the city that is quickly branching out to absorb it, and here, she uses her new work as a parallel to an inquiry into the work of Harry Smith in the Qor Corporation.  Founded by Smith to explore the potentials for mylar in broader artistic practice, the esoteric treatment of industrial materials fits well within Bove’s own mission, bending raw forms into new, mystical formulations. 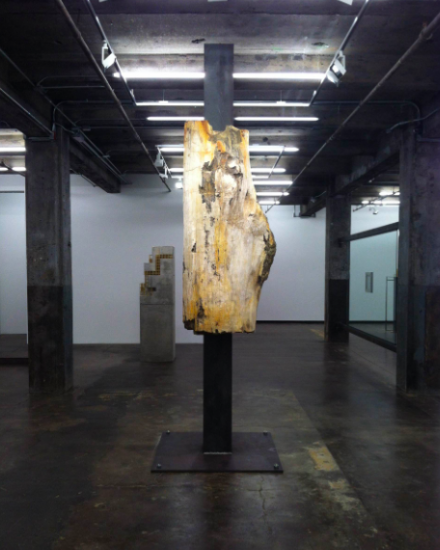 Alongside the main exhibition space, Bove has joined with Philip Smith to exhibit a series of sketches, plans and writings from the early days of Qor Corp., examining a highly developed linguistic treatment of both abstract concepts and raw inputs that serves Bove’s own creative practice well.  In one work in her part of the show for instance, a large sheet of plexiglass runs between the steel supports, dividing the space while providing a view through to the other side, hanging a work by Harry Smith in the direct center.  The transparent wall is an intriguing study in art history and a fitting metaphor for the exhibition, using Bove’s body of industrial materials to further support the exhibition and documentation of Smith’s work. 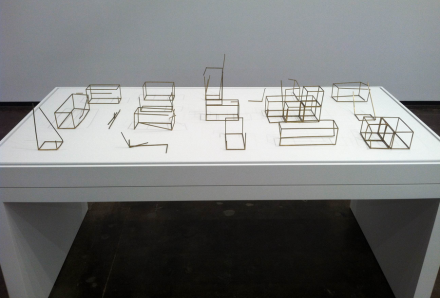 But the show continues outside of Smith’s notable influence, particularly when Bove welcomes several Qor Corporation works into her exhibition space.  In one work by Richard Berger, the artist captures a striking recreation of the surface of a sofa, done through a series of measured and hung weights.  The varying lengths of the string creates a startling relief, bringing the form of a banal object forth from a variation of elements in simple material.  The effect is immediately captivating, pressing the viewer for a new appreciation of the formal understanding of depth and shape in the figurative process. 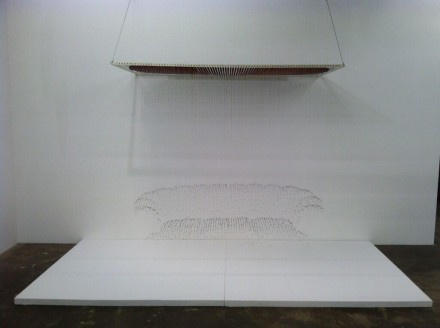 Richard Berger, My Couch (1976), via Daniel Creahan for Art Observed

In other works, Bove returns to her focus on the intersection of the natural and industrial, hanging an enormous portion of tree trunk on a steel beam.  Bearing equal reference to the Crucifixion and the implied form of the tree itself, Bove manages to imbue her simple materials and displays with a cutting interplay of signs, all of which point to a new understanding of our relationship with the world.

RA, or Why is an orange like a bell? closes on October 19th. 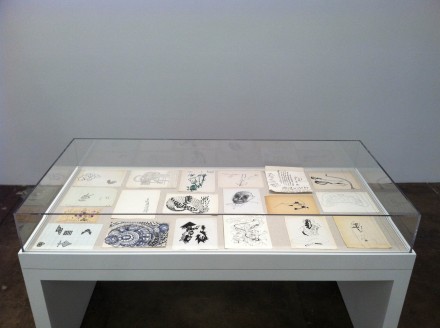 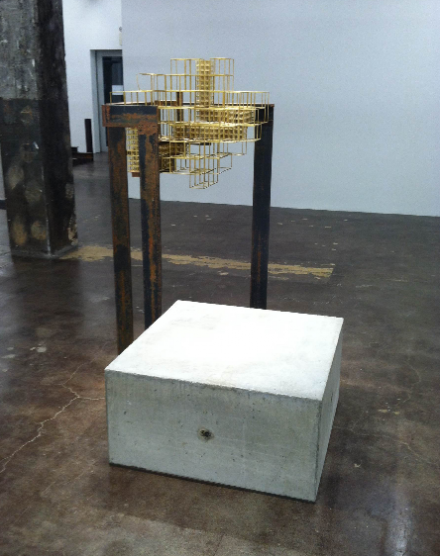 Read more:
Maccarone
“RA, or Why is an orange like a bell?” [New York Times]

This entry was posted on Monday, October 14th, 2013 at 10:56 am and is filed under Art News. You can follow any responses to this entry through the RSS 2.0 feed. You can leave a response, or trackback from your own site.