New York – John Houck: “A History of Graph Paper” at On Stellar Rays Through October 27th, 2013

John Houck’s latest show at On Stellar Rays, A History of Graph Paper is a subdued, disquieting display of one artist’s innovative approach to the medium of photography. Houck’s images of neon rectangular prisms, swatches of colorful paper, and household objects take on the feeling of collage, as if each element were cut out from some other context and pasted into his composition. His keen attention to color, combining saturated oranges and reds with gauzy seafoams, and his strong focus on line and juxtaposition make the photographs in “A History of Graph Paper” stand out from the increasingly crowded field of contemporary photography. 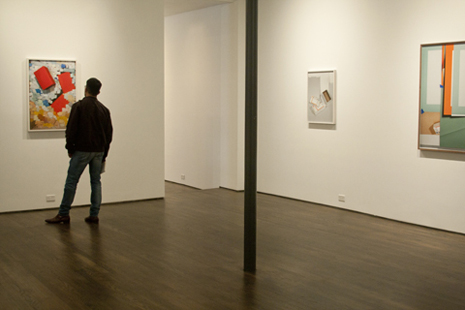 Houck’s work consciously forces the viewer to recognize the process of construction in the creation of his images. He chooses to expose the seams of backgrounds, which rarely reach the edges of the frame–instead letting the viewer see the masking tape that holds the piece together. Unlike his peers, Penelope Umbrico or Lucas Blalock (currently on view at Ramiken Crucible), who explore the flattening effects of Photoshop and its ability to smooth or rupture the legibility of an image, Houck uses an entirely analogue process. Houck’s work is a literal layering, in which he photographs an object against a background, prints the photograph at life size, and then places that same object against the backdrop of itself with altered lighting conditions or turned in another direction. The final product is a disorienting sedimentation of flattened surfaces in which the subjects of Houck’s photographs (in this case a box) have been transformed into the background plane from which they emerge. This simultaneity of focus points and lighting disrupt the notion of the photograph as a kind documentation of the physical world.

The objects Houck chooses to place in his images further underscore this play with flatness and geometrical planes. The presence of graph paper, protractors, pens, and compasses immediately evokes notions of map-making, in which the cartographer translates a three-dimensional world into a two-dimensional plane, and in the process, must warp and distort the thing she is trying to represent. Houck’s approach to the problems of contemporary image-making is an interesting, and thoughtful one, a practice which eschews the easy moves towards over-Photoshopped collage, and which instead quietly unsettles the viewer through subtle distortion and repetition.

Houck’s work is on view until October 27th.

This entry was posted on Wednesday, October 9th, 2013 at 12:00 am and is filed under Art News. You can follow any responses to this entry through the RSS 2.0 feed. You can leave a response, or trackback from your own site.