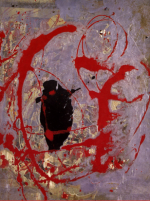 The hotly contested painting Red, Black, and Silver has been authenticated as the final painting from artist Jackson Pollock, given to his mistress shortly before his death in 1956.  The painting had long believed to have been a Pollock, but was blocked from authentication by Pollock’s wife, Lee Krasner, who held a personal vendetta against his mistress, Ruth Kligman.  That changes today, now that authorities have found strands of Pollock’s hair in the canvas, as well as sand unique to the beaches around his East Hamptons home.  “The world was flat. Now it is round. It’s Galileo. Science can now be used to authenticate the art.  We are [tracing] the painting back to where it was executed. It’s very CSI.”  Says artist and Kligman estate trustee Jonathan Cramer.

This entry was posted on Saturday, November 9th, 2013 at 10:34 am and is filed under Art News. You can follow any responses to this entry through the RSS 2.0 feed. You can leave a response, or trackback from your own site.