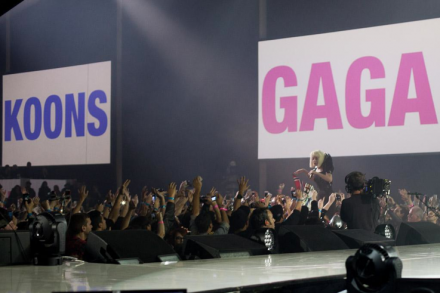 New Yorkers flocked to the Brooklyn Navy Yards on Sunday night for the long-rumored artRAVE party, celebrating the release of musician Lady Gaga’s newest album, ARTPOP, with a number of high-profile art pieces by Jeff Koons, Inez and Vinoodh, Marina Abramovic and Robert Wilson, among others, as well as a multimedia set by the pop star herself. 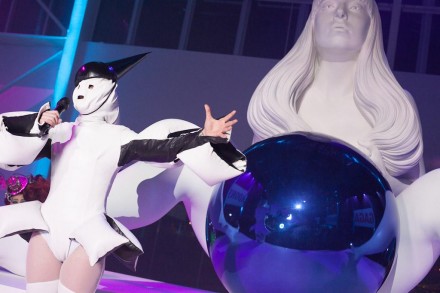 Gaga with her sculpture, via Paper

Including free food, free drinks, and a number of fashion installations and art projects from Gaga’s retinue of designers and creatives, the event was nothing short of spectacle, and the singer’s midnight performance lived up to its surroundings.  Alternating between a pillow-adorned, masked dress, a “hover suit,” and other sartorial imaginations, Lady Gaga led the crowd through a set debuting the songs from her album (which was released November 6th). 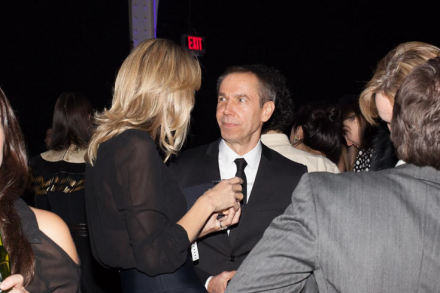 As the part wore on into the night, some noted that the ostensibly valuable Koons sculptures surrounding the party space, in particular the statue used on the front cover of Gaga’s newest album, had been vandalized, bearing signatures and graffiti from the party-goers.  It was a strangely poetic conclusion to the night for an event that blended the high-art aspirations of Gaga with her decidedly populist appeal, a party that combined free drinks with a decidedly conceptual bent. 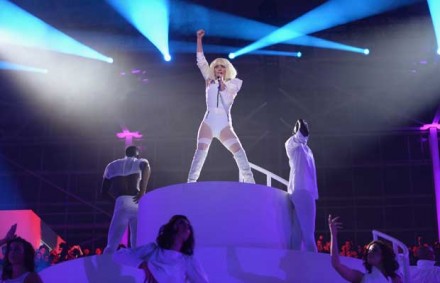 This entry was posted on Tuesday, November 12th, 2013 at 10:32 am and is filed under Art News. You can follow any responses to this entry through the RSS 2.0 feed. You can leave a response, or trackback from your own site.