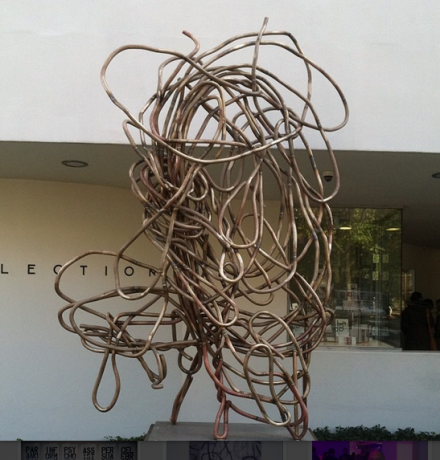 The work of artist Christopher Wool is nothing if not immediate.  Huge, stencil-cut prints, slurred spray-paint scribbling reminiscent of graffiti, and enormous splashes of paint litter the artist’s canvases and rice paper compositions, all charged with a gritty, urban freneticism that informed Wool’s early years in New York’s supercharged downtown punk scene during the 1970’s.  It’s this energy that ultimately becomes the focus of the Guggenheim’s current retrospective of the artist’s work, just recently opened at the uptown museum.

Winding up the ramp of the museum, Wool’s hyperkinetic pantings command considerable attention, using a simple palette of blacks and grays for each work, with an occasional inflection of color.  Blending these vividly minimal color selections with various techniques of erasure and repetition (in several works, Wool copies his own marks onto printing screens then experiments with layering and orientation of the print surface), the artist makes the most of simple acts executed in flux.

Taking in the works on view, one is hard pressed to find an influence readily available beyond the mid-20th century.  The free-hand spray painting makes certain ties to Cy Twombly, and his text prints make a passing reference to Warhol’s techniques, but history lessons and analogs end there.  Perhaps a more fitting perspective on his influences can be found in the handful of photographs arranged alongside the larger paintings and prints. Charting the cloudy, graffiti-strewn walls of New York, or the flaking paint of downtown slums, Wool’s camera-eye penetrates makes a tighter connection between the external landscapes of New York and his work than any direct painterly reference.

This trend is perhaps best elaborated by Wool’s patterned canvases, inspired by paint rollers used to mimic the design of wallpaper in low-rent tenement housing.  Wool uses the minimal patterns to create subtle smears and blots, underlining the roller’s inherent flaws, and the flimsy aesthetics its meant to convey.  Using these banal patterns and floral arrangements as a new starting point, Wool occasionally slurs them with huge gobs of paint, letting the thickly applied layers cluster and bulge, bleeding through each other as they settle on the paper.

At a glance, Wool’s artistic project is occasionally somewhat obtuse, and the Guggenheim’s presentation fully grasps the artist’s body of work in this sense.  Arranging the paintings, photographs and prints in a non-linear arc, the consistency and variation that are definitive in his work is free to emerge.  Moving from his bold textual works to sharp spray-painted canvases to his photographs, Wool’s perspective on the urban environment becomes more pronounced, and his willing engagement with its symbolism and semiotics is all the stronger for it.  In the context of the late 1970’s impulse to “tear it down and start again,” Wool builds his artistic product not from the aesthetic inquiries of his predecessors, but from the immanent iconography of the street, the flux, decay and rebirth of the modern city.

Christopher Wool’s work is on view until January 22nd.

This entry was posted on Monday, November 4th, 2013 at 12:00 am and is filed under Art News. You can follow any responses to this entry through the RSS 2.0 feed. You can leave a response, or trackback from your own site.