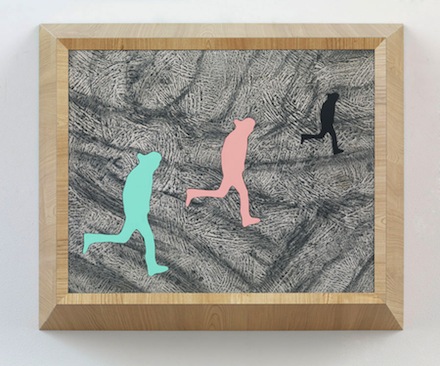 Gagosian’s Upper East Side Gallery is currently featuring the final works of the late Richard Artschwager. This exhibition coincides with the final destination of Artschwager’s traveling Retrospective, Richard Artschwager!, which just ended at Munich’s Haus der Kunst in January. Organized by the Whitney Museum of American Art and the Yale University Art Gallery, the comprehensive display of Artschwager’s life’s work was his second retrospective, the Whitney having exhibited an earlier iteration in 1988. Collectively titled No More Running Man, the works on view at Gagosian swerve in and out of generic categorization, at once painting and sculpture, to systematically present the enigmatic leitmotif of the Running Man. While one will find echoes of the past in these works, they represent the evolution of a highly protean and prolific master, whose style and subject resisted singularity for over sixty years. 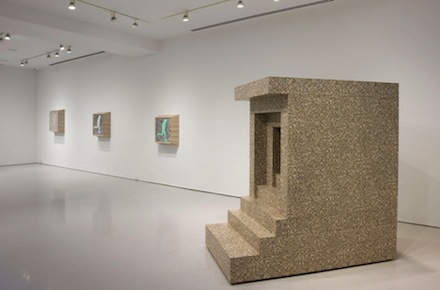 Artschwager’s career is a study in idiosyncrasy. Through the evolutions of modernist movements, Artschwager remained an enigmatic outlier, offering a conceptual mix of minimalist aesthetics and pop subject matter. Following a degree in mathematics and chemistry at Cornell University, and participation in WWII, Artschwager transitioned into art by enrolling in the Studio School in New York City, studying under Amédée Ozenfant—the founder, alongside Le Corbusier, of Purism. Just as Ozenfant and Corbusier advocated an aesthetic inspired by the modern machine age of the 1920s, Artschwager operated in the cultural geometries of industrialized, yet domestic, post-war America, using household appliances rather than industrial machinery to express consumerist modernity. He retained and reinterpreted the modernist interest in illusionism, exploring the character and quality of images and objects, conflating plastic and painterly representation. 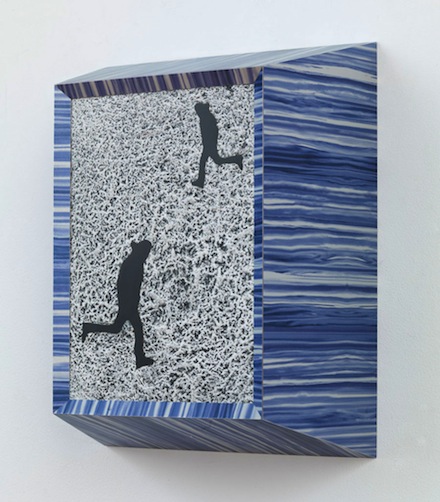 Though executed with the pristine craftsmanship of his early vocational stint as a furniture maker, these late sculptural descriptions were made not with authentic glossy woods, but rather a laminate veneer. Artschwager exploited the faux-finish gleam of Formica—available in marbles, granites, and woods—to explore the deceptive illusionism that characterized not only cheap American furnishings, but also its metaphoric counterpoint in pictorial representation. He would continue to use these materials through the course of his career, as sculptural contours and flat patterned images alike. They are often used to embellish the hand-made frames of his non-paintings, as demonstrated in this exhibition. These deep, box-like encasements render the paintings sculptural, protruding from the gallery walls in a swift procession of running bodies. 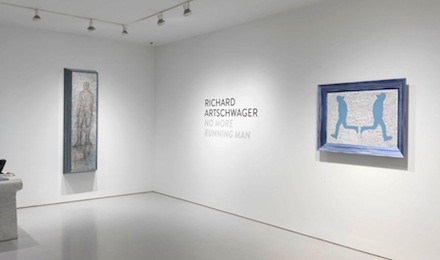 The images within these frames are also fashioned on an untraditional material. In addition to his signature application of Formica, Artschwager repeatedly utilized Celotex as the canvas for his paintings—a fibrous thermal board material used primarily for ceiling insulation. It’s soft textured surface creates granular patterns underlying the painted image, which disrupt and engage image and matter. Artschwager began painting from photographs in the sixties, his source images culled from newspaper clippings, and used a grid technique to reproduce the picture in a sooty grisaille. The recurring character in these late paintings was taken from a photograph in The Boston Globe documenting the cold spell in 1989. This huddled form, profile tucked into his chest, hands deep in the warmth of his pockets, has become a schematic silhouette. Scaled to various sizes and colors, these faceless figures are stamped atop swirling eddies of black and white backdrops, hovering in monochrome above the textural rosettes of bristling Celotex. They populate the bulky frames alone and in groups—as mirror images and echoing diminutives, carrying ones eye across the blank white walls between frames. One of the men seems to have escaped his frame–a cut out applied directly onto the wall. Yet this large figure is not flat and opaque like his brothers, but rather has the appearance of steel wool, essentially sculpted out of synthetic horse hair—another of Artschwager’s favored materials. 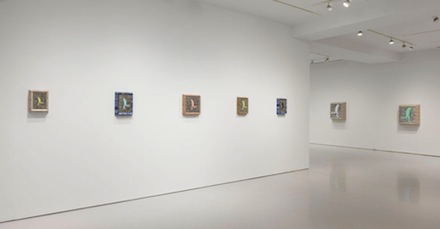 Yet the true outlier in this group  is not a Running Man at all, but Artschwager’s own likeness. Standing Self Portrait, the only vertically-oriented painting in the show, is a frontal nude in heavy outline, who confronts the viewer with an outward gaze. This grisaille surrogate takes on a somber tone in the shadow of his recent death, particularly in conjunction with the sole sculpture in the show, titled ‘Monument.’ It is a stepped, cuboid structure, plated with granite-finish and a dark hollow interior that is as mysterious as it is sepulchral. There is gravity to its geometric solidity and pseudo-ancient architectural form. While the Formica veneer harmonizes with the similarly artificial painting frames, Monument’s imposing and confounding presence amongst the running men and his own self portrait renders them almost sarcophagal. The exhibition assumes an elegiac tenor in title as well as content, declaring the end of this character’s proliferation.’No More Running Man’ is up through February 22nd, 2014 at Gagosian Gallery on Madison Avenue.

This entry was posted on Friday, February 21st, 2014 at 12:01 pm and is filed under Art News. You can follow any responses to this entry through the RSS 2.0 feed. You can leave a response, or trackback from your own site.