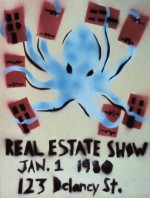 Dealer James Fuentes will launch a show next month reflecting on the infamous Real Estate Show held in the Lower East Side in 1980, a seminal exhibition in protest of the city’s dealings with low-income neighborhood residents that ultimately led to the formation of the famous ABC No Rio space.  The show will include many artists from the original show, as well as videos and films documenting the event.Read more at James Fuentes

This entry was posted on Thursday, March 20th, 2014 at 8:26 pm and is filed under Art News. You can follow any responses to this entry through the RSS 2.0 feed. You can leave a response, or trackback from your own site.