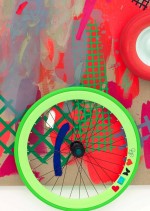 The New York Times has a published a preview piece on next week’s opening for the Whitney Biennial, which will open concurrently with Armory Week next Friday.  The 77th edition of the event will be the last in the Whitney’s current home before it moves to its new location in the Meatpacking District, and features the collaborative vision of three separate curators, each of which are occupying a single floor of the museum.  “It’s as if you’re on your laptop and have three windows open,” said Stuart Comer, one of the curators and the head of media and performance at MoMA. “It’s not a collaboration but a conversation, a dialogue.”

This entry was posted on Sunday, March 2nd, 2014 at 11:56 am and is filed under Art News. You can follow any responses to this entry through the RSS 2.0 feed. You can leave a response, or trackback from your own site.