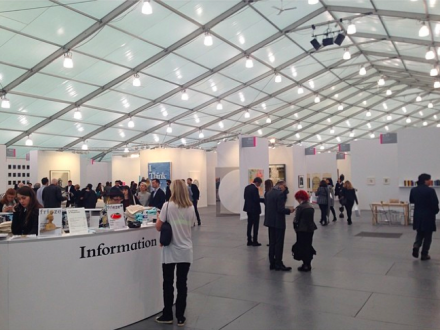 Following Thursday’s preview event and Friday’s initial day of public entry, Frieze Art Fair is up and running, opening the doors on a revamped fair that has already drawn considerable praise for its strong, diverse selection of galleries and artists, mounting a combination of impressive works alongside more challenging, unique installations that offer a fitting cross-section of the contemporary field. 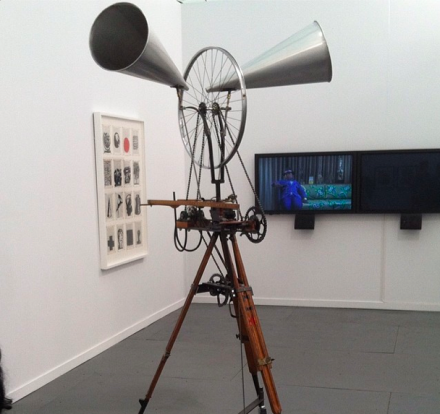 William Kentridge at Goodman Gallery, via Art ObservedRunning along several long halls in a tent designed by Brooklyn architects SO-IL, the fair, and its included galleries, makes fine use of the flexible exhibition spaces and copious open space separating each section.  Many of the galleries welcomed an extended browse, like at Andrew Kreps, where a turn around the corner inside its booth revealed an excellent video installation by Ryan Trecartin, and one of his consumer goods sculptures with frequent collaborator Lizzie Fitch.  But perhaps the best example here goes to multimedia artist Takeshi Murata, whose Melter 3-D sculpture was a clear highlight of the show.  Tucked away in a corner of the fair, the three-dimensional, ridged sculpture uses rapid strobe lights to create the illusion of a rippling, flowing surface, a mesmerizing animation that rewarded the intrepid visitors who tracked it down. 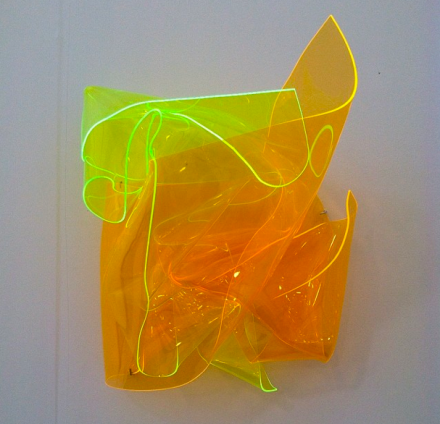 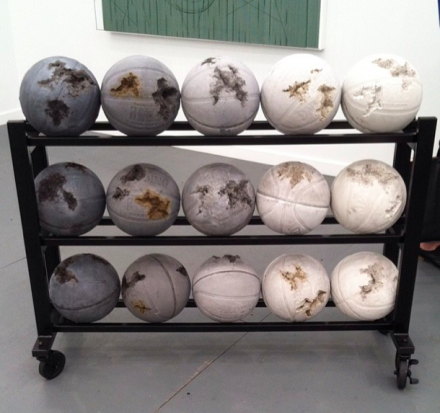 A number of other works also commanded attention in more prominent positions.  Roxy Paine’s work Revolution, consisting of a wooden chainsaw and megaphone assemblage caused quite a stir at the Marianne Boesky tent, as did Rikrit Tiravanija’s Freedom cannot be simulated, a series of black canvases positioned between large plywood walls, forcing viewers to sandwich themselves tightly into the narrow spaces to view the whole of the work.  It was a fitting work given the prominence of photo takers at the fair, forcing visitors to forgo any attempt at picture taking to appreciate the experience of trying to view the full work.  Also of note was Olafur Eliasson’s gorgeous glass-work sculpture, a ring of crystal orbs gradually darkened over as the viewer winds their way around the circle. 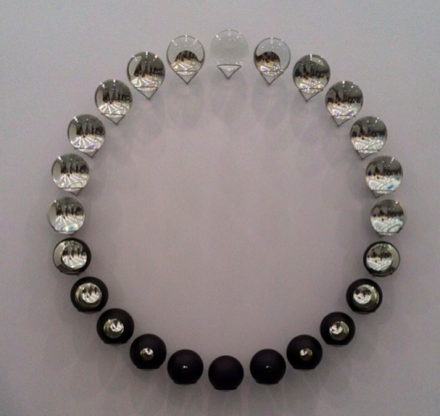 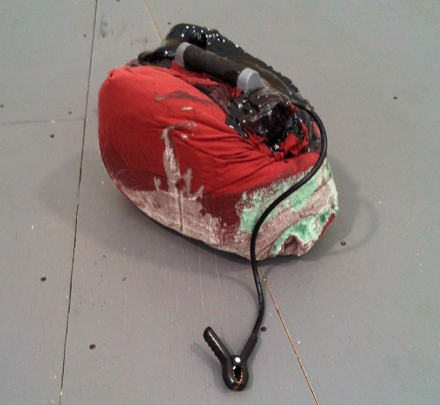 Other galleries made use of the wide expanses that SO-IL’s design offered in many areas.  Gagosian Gallery, in a typical show of muscle, installed an enormous stretch of white flooring in front of its selection of Ed Ruscha bleach paintings, a bright, illusive choice that underlined the simple mechanics and delicate coloration of the artist’s hand.  The move seems to have paid off, with the gallery selling out the set of works, each priced at $175,000  Gladstone Gallery also went with a sizable corner booth, bringing with it a massive selection of drawings by Carroll Dunham, priced from $5,000 – $10,000.  Marian Goodman, conversely, seized a unique opportunity above its space, and hoisted a series of Danh Vo sculptures, utilizing flags and American iconography, all painted in gold leaf on cardboard, above its booth.  Located near the center of the fair, the hanging works were a fitting break from the bustle of the booths, as viewers sat for a moment and gazed upwards. 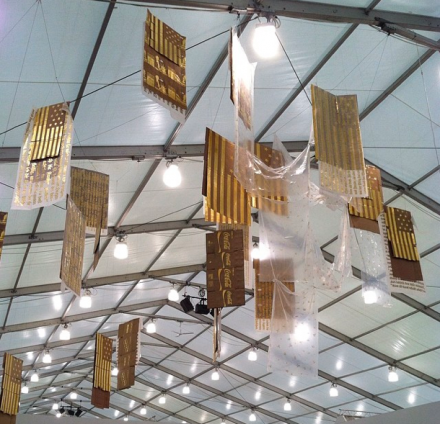 Over in the Frame section of the fair, a number of artist’s used their gallery booth to bring together peculiarly immersive installations, combining architectural elements with media or non-artistic materials to create bizarre art environments.  Artist Florian Meisenberg was one such example, installing a series of metal frames, idiomatic canvases and looping video screens in a dizzying array across the space of Simone Subal’s booth.  On a more subdued note nearby, Ariel Reichman’s garden installation for Berlin gallery PSM, brought a blend of planted flowers and stone work to the gallery floor. 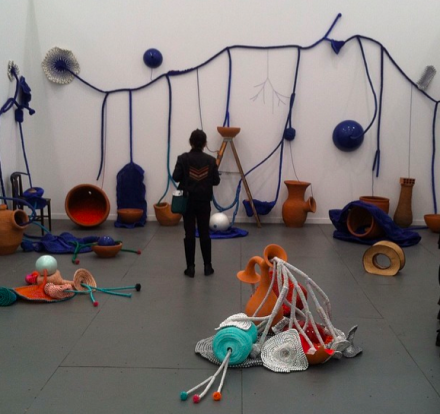 Maria Nepomuceno at A Gentil Carioca, via Art Observed

It wasn’t the only project to engage with the pristine greenspace surrounding the fairgrounds.  A number of the Frieze Projects pieces this year made active use of the long stretches of grass that circled the newly built space.  Argentinian Eduardo Basualdo for instance, created a non-functional soccer field just outside of the fair’s entrance.  Placing plexiglass over the goals, the artist prevented the field from ever fully functioning, making a ploy about the impossibility of truly achieving one’s “goals.” 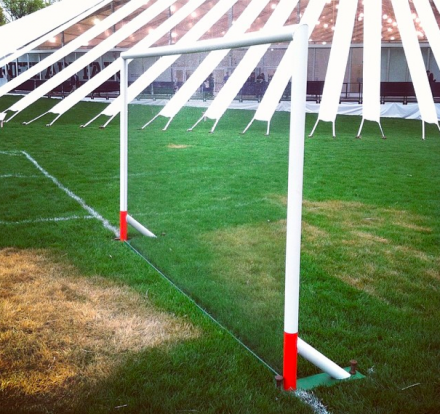 Inside, artist Naama Tsabar had built a fully functioning music stage for “underground” acts to perform, removing the flooring from a booth inside so that the grass could be clearly seen from inside the tent.  And of course, there was the much talked about recreation of Allen Ruppersberg’s Al’s Grand Hotel, here imagined as a trio of rooms inside the fair grounds where visitors could sit, relax and even book a night.  Somewhat confusing in its small size, the installation still commanded considerable attention from passersby. 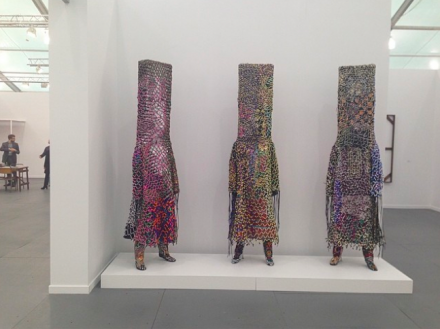 As is usual with the fair, sales came fast and furious, as collectors scrambled to claim a new trophy piece.  Georg Baselitz was a fine choice in that respect, and his work Zero Ende at Thaddeus Ropac managed to find a buyer for the hefty price tag of $1.8 million.  Salon 94 also saw strong sales, bringing in $30,000 for a Jayson Musson painting, as well as a large Jules de Balincourt work for $100,000.

Frieze will remain open through Sunday. 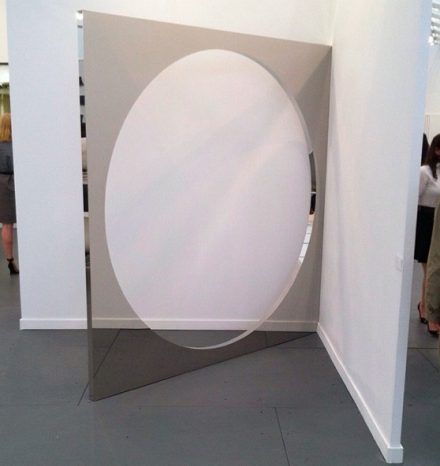 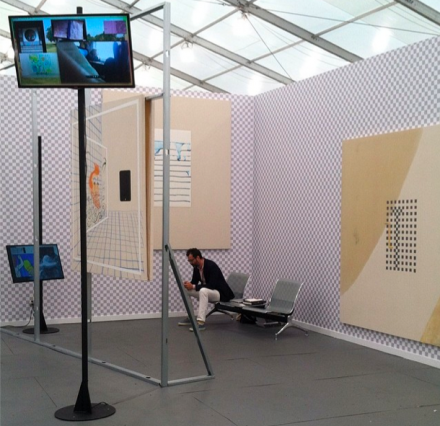 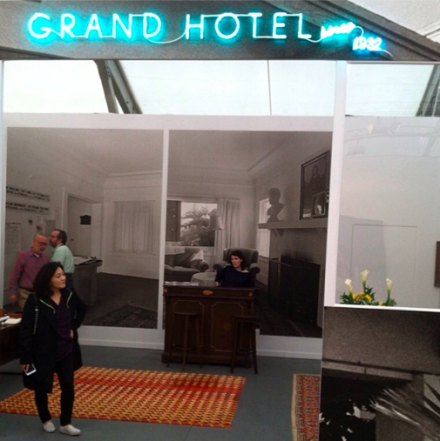 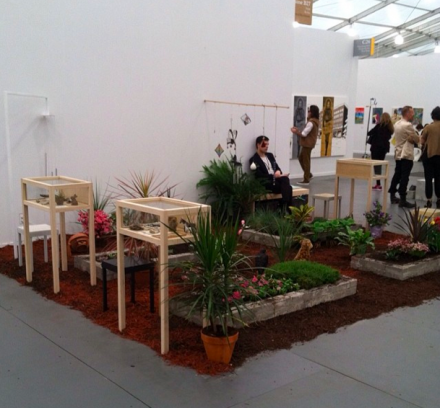 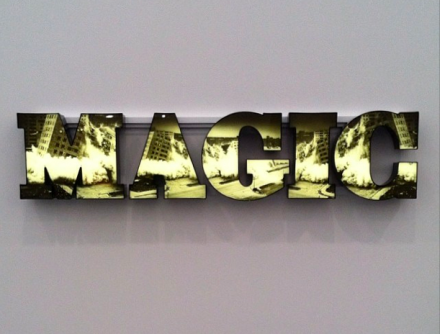 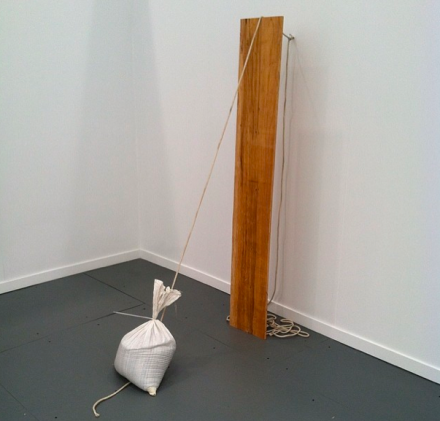 Virginia Overton at Mitchell-Innes and Nash, via Art Observed 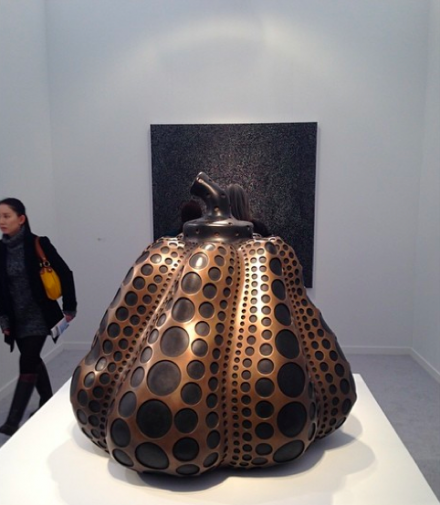 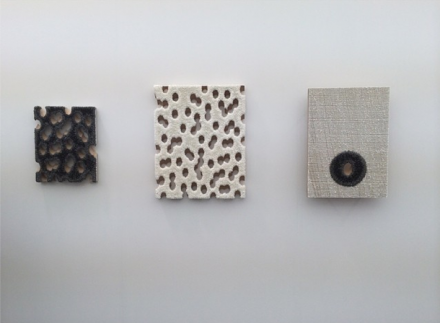 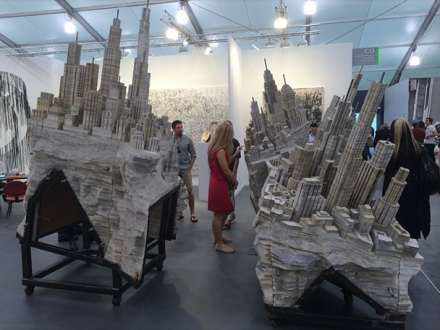 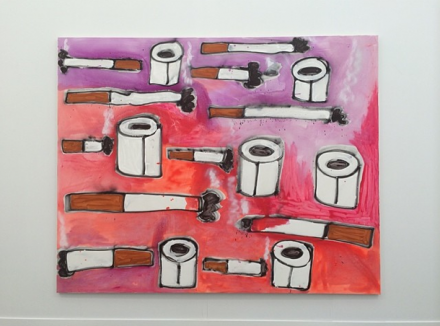 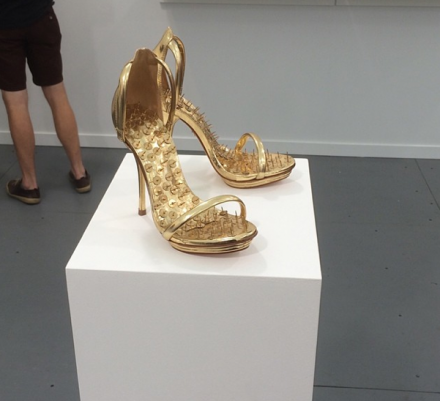 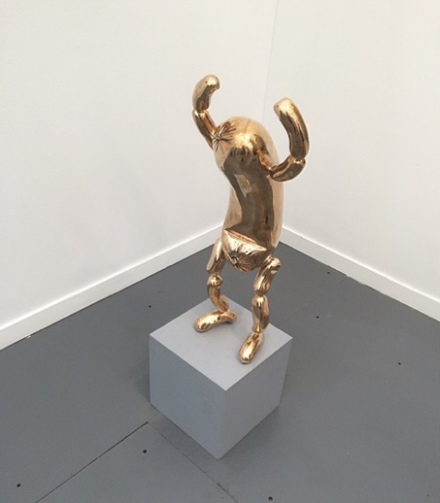 This entry was posted on Sunday, May 11th, 2014 at 11:59 pm and is filed under Art News. You can follow any responses to this entry through the RSS 2.0 feed. You can leave a response, or trackback from your own site.