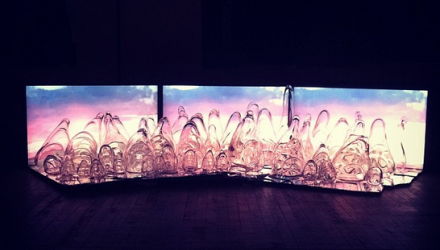 The annual festivities surrounding Bushwick Open Studios seem to get bigger each year, and 2014 was no exception, as the yearly summer art open wrapped its eighth year of open artist studios, new gallery shows, and a freshly inaugurated art fair in the heart of one of Brooklyn’s hotbeds for creative talent. 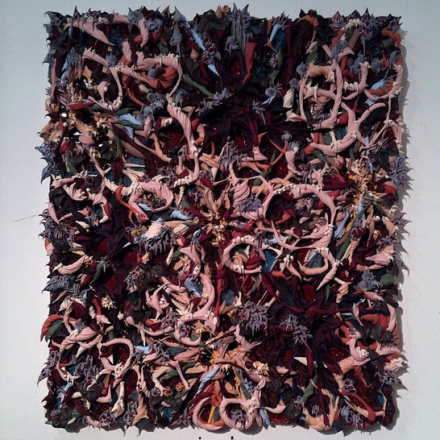 Open Studios expanded ever further in Brooklyn this year, with exhibitions and studios opening their doors on the borders of Brownsville and Bed-Stuy, as well as a number of shows creeping up into East Williamsburg, with a large number of galleries opening new exhibitions specially targeted to coincide with the fair’s opening on Friday night.  Microscope Gallery on Myrtle Avenue opened a new exhibition of works by video artist Matt Town, showing the artist in his quest to build and operate a functioning Soap Box car. 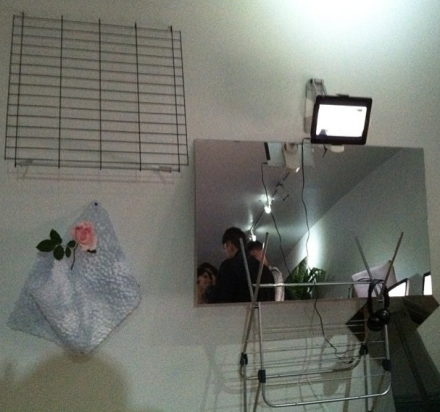 Across the street, the newly opened Stream Gallery was hosting the digital arts education initiative Powrplnt, featuring work by Analisa Teachworth,Ivana Basic, and several other digital artists, inside an impressive space that boasted aquaponics and copious house plants.  Luhring Augustine’s Bushwick location also seized on the opportunity to launch its new show of works by Tom Friedman, a selection of paint and styrofoam works that ranged from interpretations of Van Gogh’s Starry Night to a remarkably realistic hanging balloon sculpture. 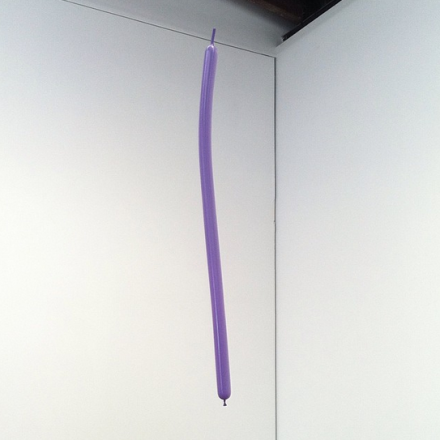 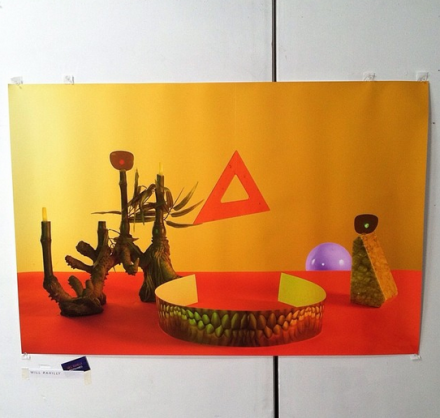 A colorful, all-analog photograph by Will Rahilly

One could note an increasing impact on the event by galleries and exhibition spaces across the board, a note that took something from the typically freewheeling, occasionally unpredictable nature of the event.  As Bushwick’s art scene continues to flourish, and new galleries continue to pop up, the event seems to be moving in a more professionalized, curated direction.  The benefits and drawbacks could be seen in full measure at the NEWD Art Show, a wholly impressive art fair event featuring a small group of galleries from Bushwick and its surrounding neighborhoods (including a few from Manhattan). 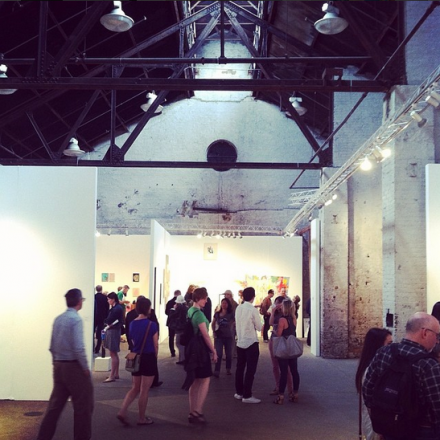 Inside the NEWD Art Fair 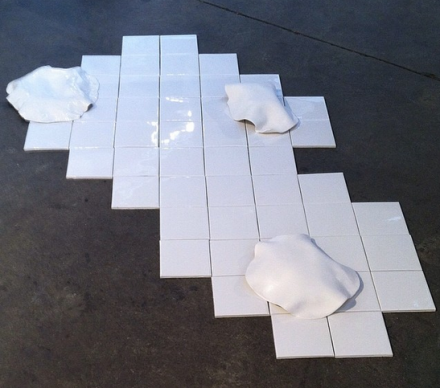 Hayden Dunham at SIGNAL for NEWD

Offering an excellent and varied selection of works, including a group of industrial sculptures and wall mounted works at SIGNAL Gallery, and a selection of works by Jon Rafman and Brenna Murphy at Bed-Stuy’s American Medium, offered a tightly-curated and essentialist perspective to young artists practicing today.  Even so, some of the discovery and unexpected works that has come to define Open Studios was conspicuously absent, replaced with an atmosphere similar to any art fair around the world. 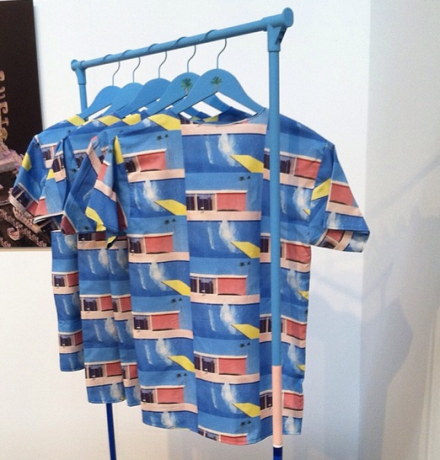 But the increased presence of a professional take on BOS didn’t stop the event from its yearly rituals of studio-hopping, clandestine parties and unexpected installations.  17-17 Troutman (just over the border in Ridgewood, Queens) remained one of the hotspots for some of the best artist studios and start-up galleries in the neighborhood, with an offering of intriguing and varied works.  In one studio, artist Paul Gagner was showing a selection of paintings ranging from reframed takes on abstraction to a cutting oil composition of the artist’s job application for a position at Dunkin’ Donuts, or another of his computer desktop, marked by an open photo of a ham sandwich. 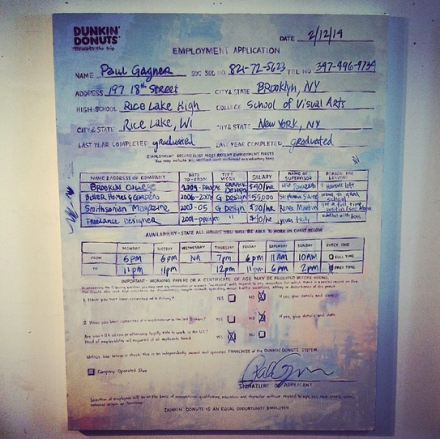 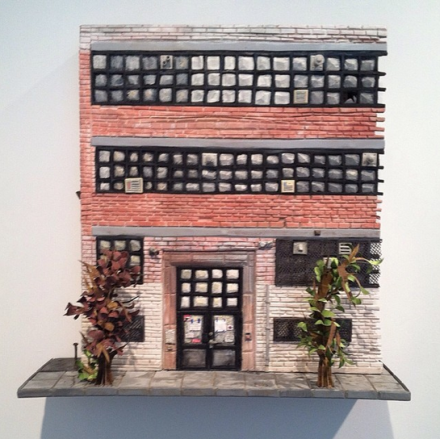 One floor below, Harbor Gallery had left open a show of miniature artworks, including a selection of pieces by James Sheehan that required a magnifying glass to view, or a Nicholas Buffon diorama of the 17-17 Troutman front doors.  Up the street, a special installation titled Misunderstandings in the Car Park was tucked away in the driveway of an apartment complex, featuring a number of hardscrabble wooden sculptures, including Jim Osman’s immensely popular grass lounge chair.  Covered with sod, the wooden recliner welcomed visitors to a welcome rest, a fitting counterpoint to the occasionally overwhelming industrial sprawl of the neighborhood. 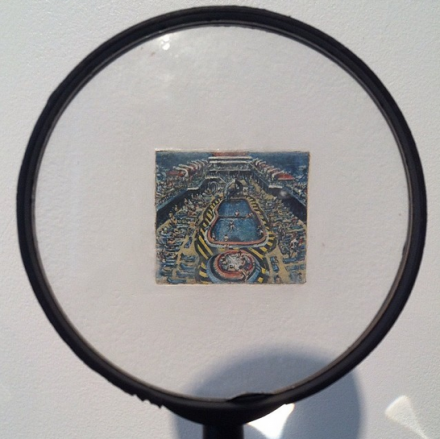 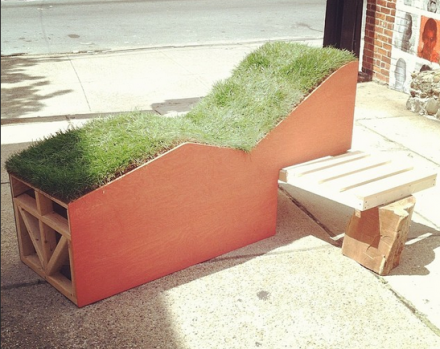 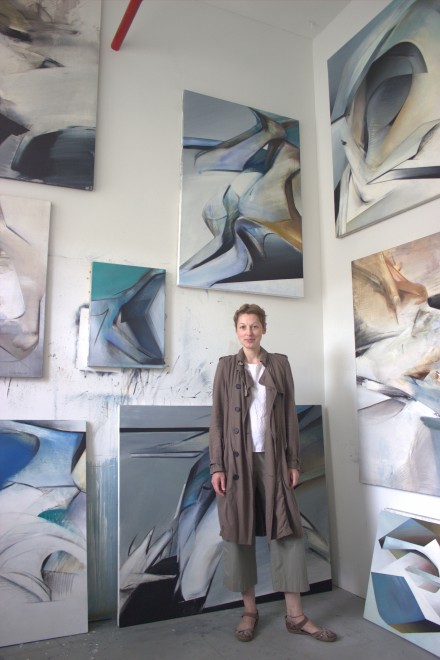 Another studio hotspot, 56 Bogart, also boasted a large offering of artists.  In one studio, painter Seren Morey was showing a series of canvases with thickly applied gobs of paint, creating swirled, often gnarled textures that filled the canvas with a striking kinetic energy.  On the other side of Flushing, a massive show titled Do It Yourself was on view at 195 Morgan, the former home of 3rd Ward.  The walls of the space were filled, and a number of performances and short works dotted the proceedings.  But the real surprise came upstairs, where artist Andrew Erdos had opened his studio unannounced.  Featuring a dazzling collection of blown glass and resin sculptures incorporating mirrors and Hi-Def LCD televisions, the works shifted in color and tone, underscoring parallels of the natural and the manufactured, while filling the studio with a dull, luminous sheen. 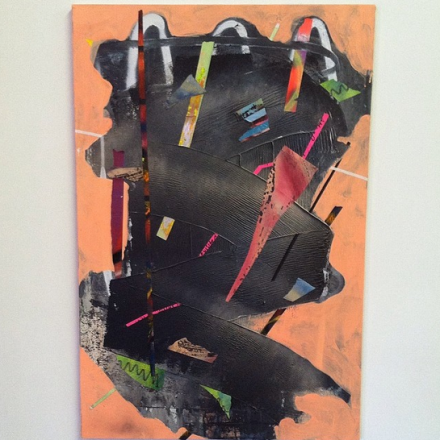 Will Hutnick at Do It Yourself 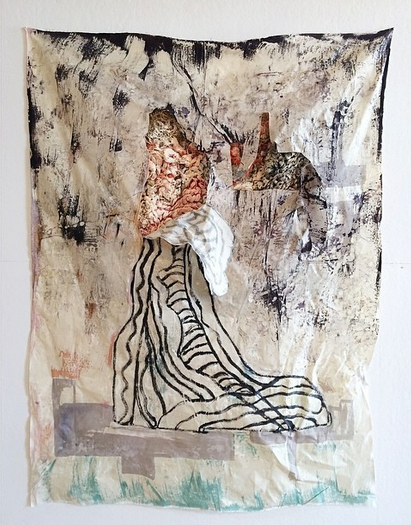 Concluding another bustling year of studio visits, special projects and installations, Bushwick Open Studios will pack up and prepare for next year, likely bringing an even larger offering as the neighborhood’s art community continues to grow. 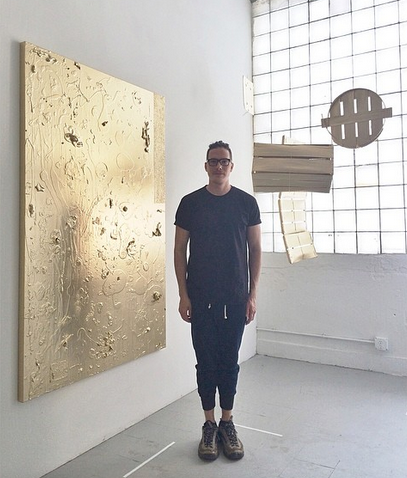 Sean-Paul Pluguez with his work 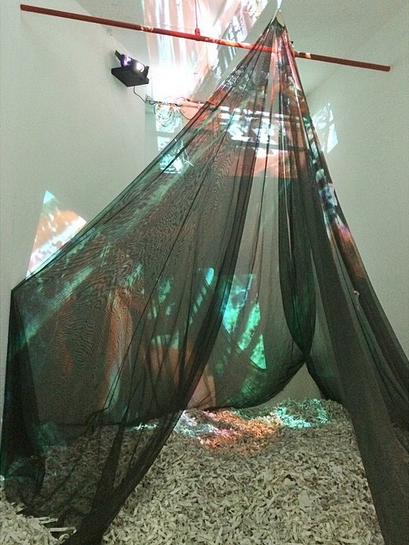 A visual installation by Matthew Caron 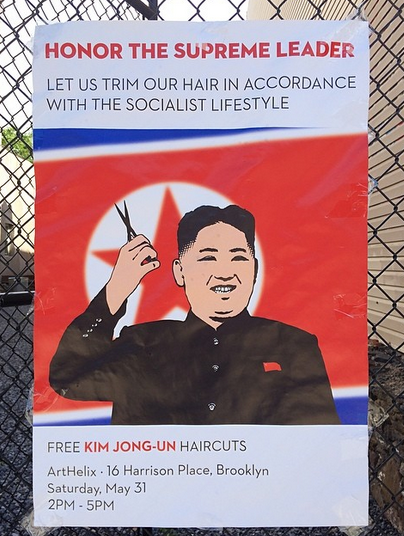 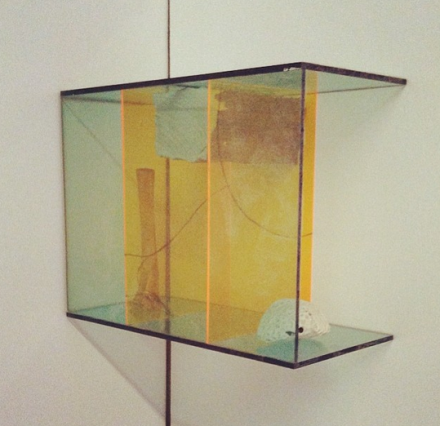 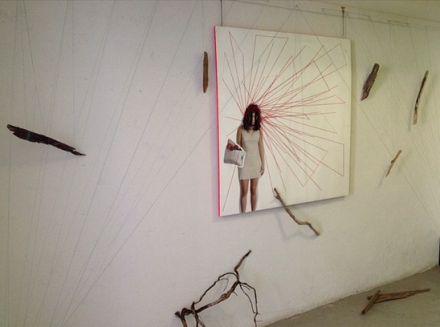 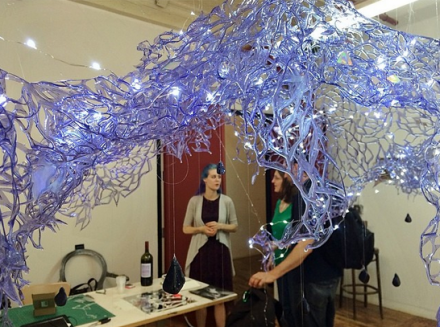 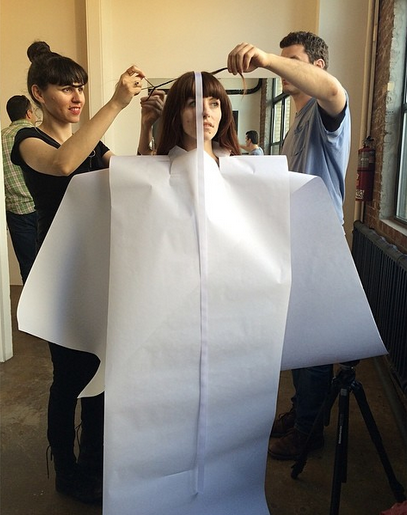 Artists Prepare a Dancer at Do It Yourself 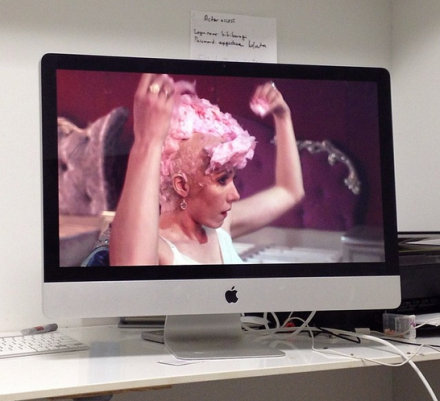 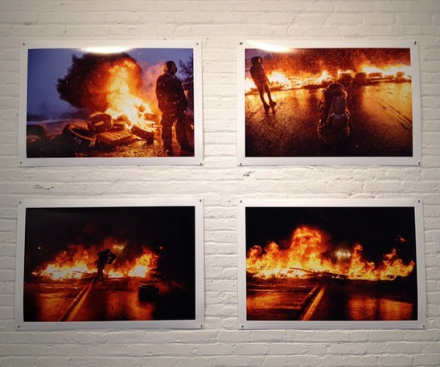 Michael Premo at Be Electric Studios 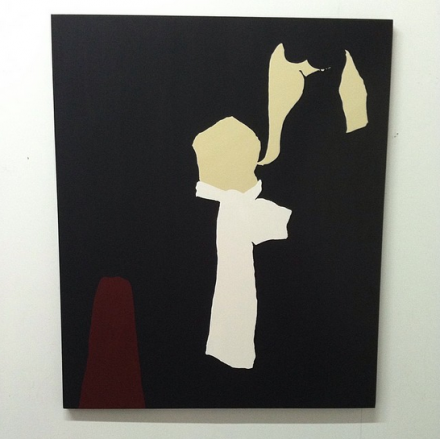 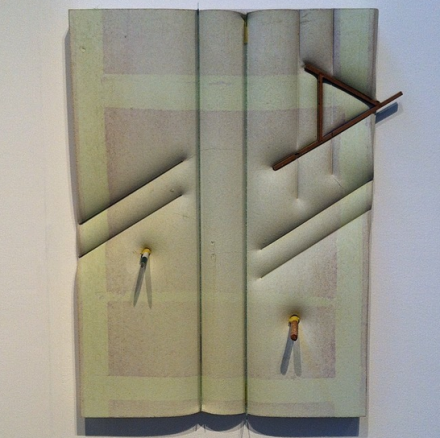 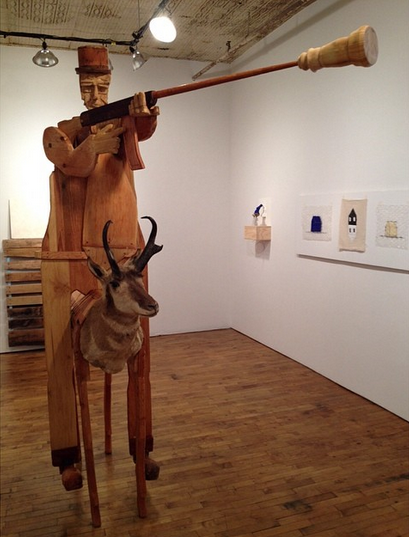 David B Frye at 449 Troutman 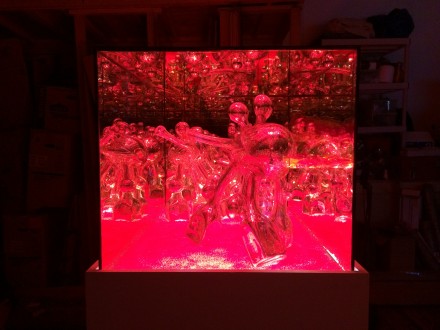 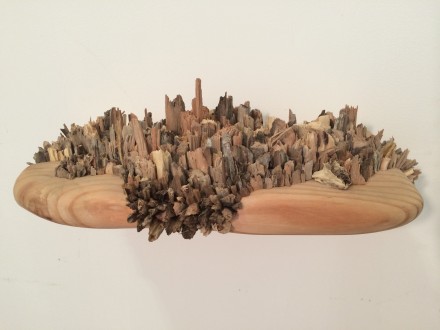 Jagged Wooden Work at Do It Yourself 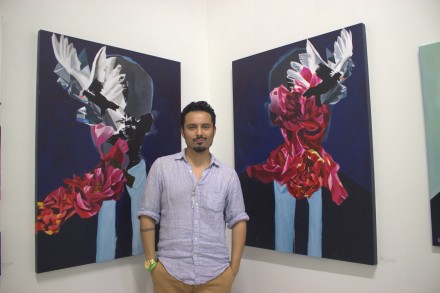 All images by Patrick Jaojoco, Daniel Creahan and Kelly Lee for Art Observed

This entry was posted on Monday, June 2nd, 2014 at 2:56 pm and is filed under Art News. You can follow any responses to this entry through the RSS 2.0 feed. You can leave a response, or trackback from your own site.