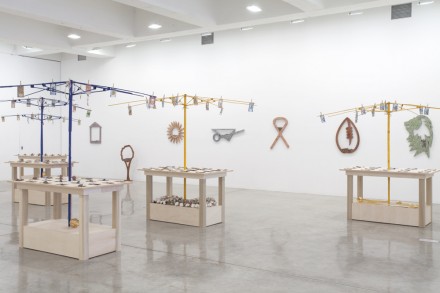 Last July, the Tate Modern opened its doors for a special exhibition that went beyond the set norms and techniques of exhibition planning. Meschac Gaba’s Museum of Contemporary African Art was a special project expanding twenty years of work across two continents, accumulated and exhibited in the rooms of the London museum. Composed of twelve different spaces, the large-scale exhibition was an outcome of Gaba’s investigation of the arts in African countries while questioning the often problematic affair between African art and the decision makers of the art dynamic and markets of the West. 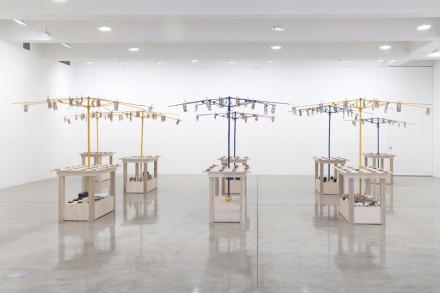 Continuing some of these thematics, Gaba is currently presenting his latest body of work at Tanya Bonakdar Gallery. As the title Exchange Market suggests, the content of the exhibition is distinguishably opinionated  regarding the global economic structures and the imbalance of labor against income for the vast majority of societies around the world. Hailing from Benin, Gaba has lived and worked in The Netherlands, and seizes on the issues surrounding the unfair distribution of wealth and the exploitation of the less privileged from a Non-Western point of view. This duality also ties to other oppositions such as First World versus Third World or Developed versus Underdeveloped, suggesting a breakdown of the separation between the powerful and the weak.

Downstairs at Bonakdar, Ten marketplace stands showcasing a wide range of symbolic objects  (hand tools, cotton balls, cacao beans, outdated or currently popular mobile phones) and banknotes from different countries attached onto umbrellas. Titled Bureau d’Exchange (Exchange Office), the ten-table installation presents devalued or still in use African currencies printed with multiple zeros, as well as certain Western banknotes with many fewer zeros. Reduced to sheets of paper hanging from the salvaged umbrellas, these banknotes make visually potent statements on the problematic connection between labor and income while discussing the disadvantaged political and economical structures around the globe, given no shade under these bare umbrellas. 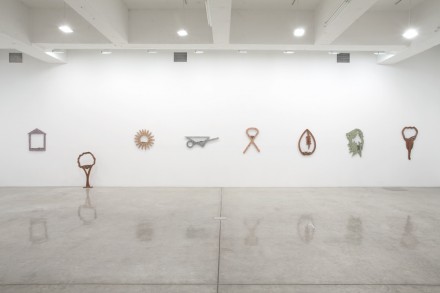 Also on display on the first floor is a group of coin banks hung on the gallery walls. With their shapes inspired by famous bank logos or culturally potent figures, these banks do not serve for the common purpose of collecting money for charity or personal use; however they stand out as the silent emblems of a collectively desired utopian reality, ideally stemming from individual contributions. 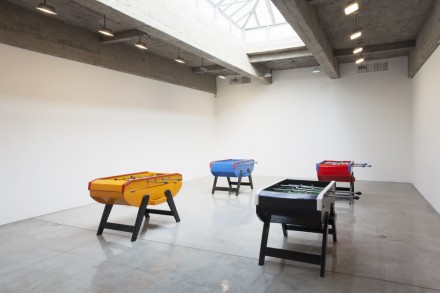 The argument on collectiveness and global unity continues on the second floor where viewers are presented with four foosball tables, each made in Benin. Visually recalling the original Western pastime, the tables differ with their uncommon arrangements regarding the execution of the game. The soccer tables Gaba presents include players dressed in uniforms of different nations and players of markedly different races as opposed to generic and neutral players. 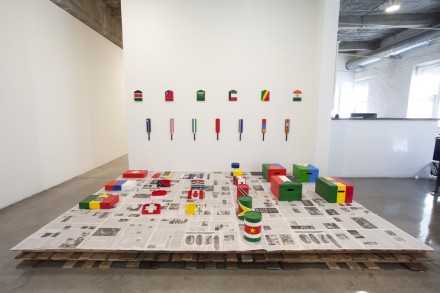 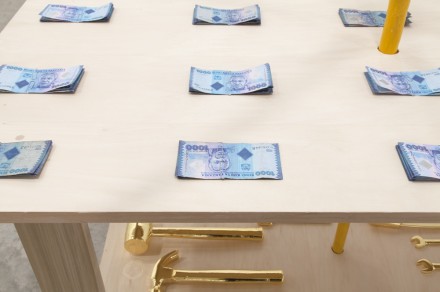 As components of a unitary operation, all connected to each other, players on these soccer tables stand out as the embodiments of current economical and social structures planned according to different goals and strategies. In one, for instance, a smiling, American flag-clad team is pitted against one bearing a uniform of pan-African identity.  The oppositions are striking.  From a more optimistic point of view, these players emphasize the artist’s statement on a utopian collective agenda that is solely accessible through a global awakening and realization.

This entry was posted on Sunday, June 1st, 2014 at 12:00 am and is filed under AO On Site. You can follow any responses to this entry through the RSS 2.0 feed. You can leave a response, or trackback from your own site.