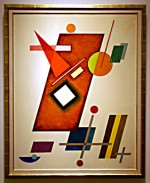 An article in The Wall Street Journal explores the eventful life (and afterlife) of Rudolf Bauer, a little-known early 20th century painter. A contemporary of artists such as Paul Klee and Vasily Kandinsky, the German-born Bauer explored the new movement of abstraction, creating innovative works with the support of patron Solomon R. Guggenheim. Bauer’s work, which had already been exhibited at the MoMA in the 1930s, was meant to feature prominently in the Guggenheim Museum as the core of the collection. In the 1940s, however, Bauer and Guggenheim suffered a falling-out, and Bauer renounced painting while his work went into storage at the museum. The article reports that, after over six decades of near-obscurity, Bauer will feature in upcoming shows by the German Consulate General and at Sotheby’s in addition to a documentary film and an Off-Broadway play.

This entry was posted on Friday, August 15th, 2014 at 6:01 pm and is filed under Art News. You can follow any responses to this entry through the RSS 2.0 feed. You can leave a response, or trackback from your own site.