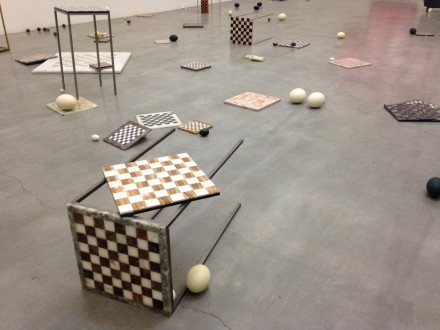 Among the decision-making factors in set expanse of time, risk plays a crucial part.  Simply described as the potential of losing an owned value upon a taken action, the risk element occupies a noticeable part in economic, social and political dynamics, aside from striking as a noteworthy reality to consider for individuals in the daily routine. The St. Petersburg Paradox, a group show on view at Swiss Institute through August 17th, observes this broad topic through a determined perspective, suggesting an alternative reading based on the reflection of risk elements in artworks. 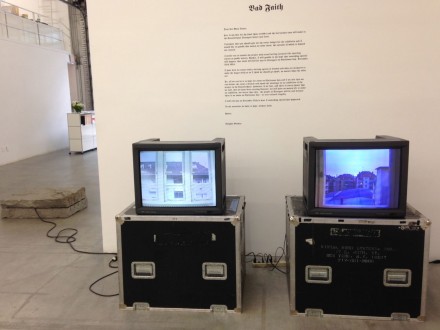 Inspired from Nicolaus and Daniel Bernoulli’s theory of the same name, the exhibition places the notion of risk taking in response to aims at a certain physical or sentimental benefit, while searching for the possibilities to eliminate or, rather, to reduce the risk factor.  Bernoulli’s theory argues that the inherent human reaction towards the risk element is best seen through a gambling game in which the basic rule is to aim heads in each toss of the coin, and to continuously double the reward each time, starting initially with one dollar.  Despite a fifty percent chance of winning each game, participants in Bernoulli’s experiment are intuited not to offer big sums to start the game, opting to start the game with one dollar. The theory sets its argument on this cautious reaction evident in human nature towards risk taking. 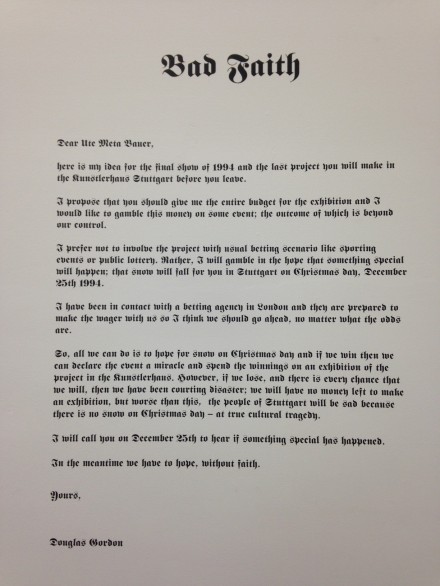 Covering the exit to the main gallery of Swiss Institute’s SoHo space is Giovanni Anselmo’s Untitled, a piece consisting of electric cables and two large blocks of stone, positioning the tension coming from the active electricity on the cables as an element to consider. 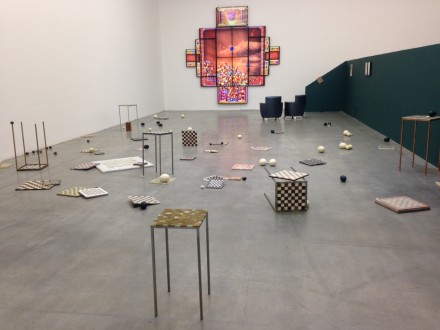 Upon passing Anselmo’s risk carrying piece, Sankt Petersburg Paradox,Sarah Ortmeyer’s large scale installation of chessboards in different mediums and eggs of various animals scattered around the floor, requires cautious movements from the viewers’.  As a game heavily tied to the element of risk-taking, chess perpetuates the crucial notions of smart thinking and abrupt decision making. Eggs on the other hand bear a completely different yet familiar warning, being the factor of the mundane as well as a physical risk to be aware of. Among the works commissioned for the exhibition is Tabor Robak’s A*, a multi-channel video installation streaming a series of phantasmagorical images of fear, tension and thrill, resembling the graphics of a video game while not involving a player to control it. 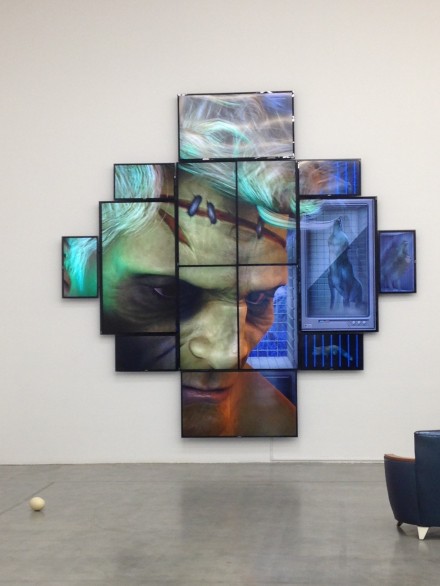 Other works toy with the element of chance and possibility in the construction of the piece itself, such as Jean Arp’s Collage géométrique, a composition of randomly tossed paper on a mount, as well as Douglas Gordon’s Bad Faith, the artist’s humorous investigation of luck by betting the realization of his already funded art project for Künstlerhaus Stuttgart on the possibility of snow on a Christmas Day in the city. 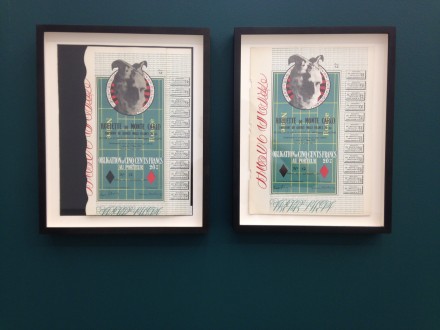 Gambling, a phenomenon strongly relying on the notion of risk taking by nature, seems to be a fitting metaphor within the concept. Marcel Duchamp’s Monte Carlo Bond, a classic Duchampian parodical piece playing on a plot in which Duchamp is defrauding a casino, is a so-called legal document featuring a photo of the artist collaged with a roulette table by Man Ray as an overhead. Covering the floor from wall to wall inside the gallery is Cayetano Ferrer’s Remnant Recomposition, the artist’s composition of various carpets made especially for casinos. Blindingly vivid colors and bold design motifs on these carpets echo the puzzling state of casinos, with their never-ending mechanic noises and latent encouragement for constant squandering.

The St. Petersburg Paradox is on view at Swiss Institute through August 17, 2014. 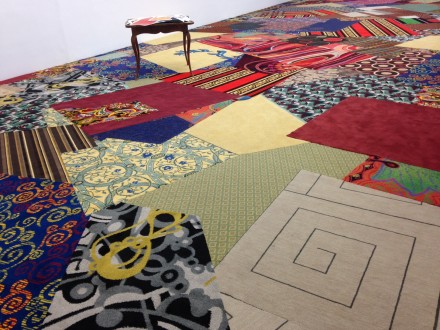 This entry was posted on Friday, August 8th, 2014 at 12:00 am and is filed under AO On Site. You can follow any responses to this entry through the RSS 2.0 feed. You can leave a response, or trackback from your own site.